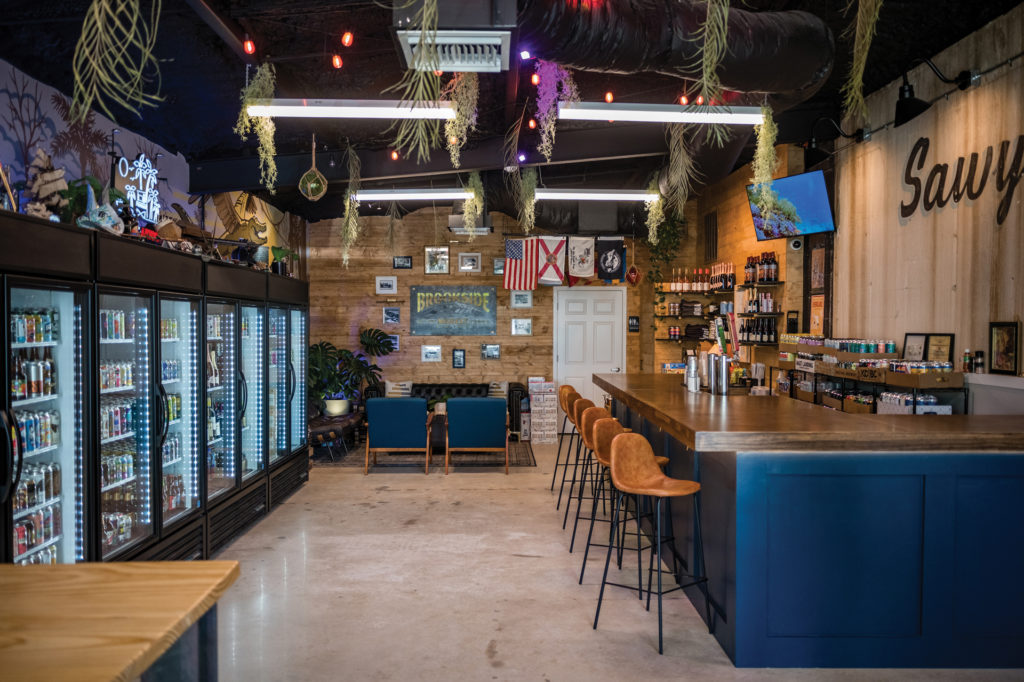 This spring, Naples native Cody Shadley partnered with three friends to open the craft brew-focused Brookside Beer Market next to his family’s longstanding fly shop, Mangrove Outfitters, at Brookside Marina in East Naples. Though Hurricane Ian caused 3 feet of water to rush into the shop, the team is working to repair and reopen promptly.

When they started initial construction on the bottle shop and bar, they uncovered the original 1960s Sawyer’s Carpets & Tiles store sign and used it to accent the six-seat bar and lounge area. They extended the Florida outfitter vibe from next door by commissioning artist Rob Bengino, of Lakes Rivers Streams, to paint a large mural that incorporates elements of Everglades folklore, like the Squallies pig people, who are said to live on the edge of the swamp. “We all grew up in Naples and wanted a ‘come-asyou-are’ vibe while keeping the funky character of the area’s history,” says one of the four partners Bryan Flores.

Captains and guides from Mangrove Outfitters often walk over for a post-trip drink or to fill up on the stock of sandwiches from Jimmy P’s, the beloved Naples butcher shop and deli. The majority of the 160 craft brews are from Florida, and most of the taps are local. Brookside fully embraces the Florida vibe, with a constant lineup of events, including mullet contests, yoga-and-beer sessions and a monthly market with local makers.