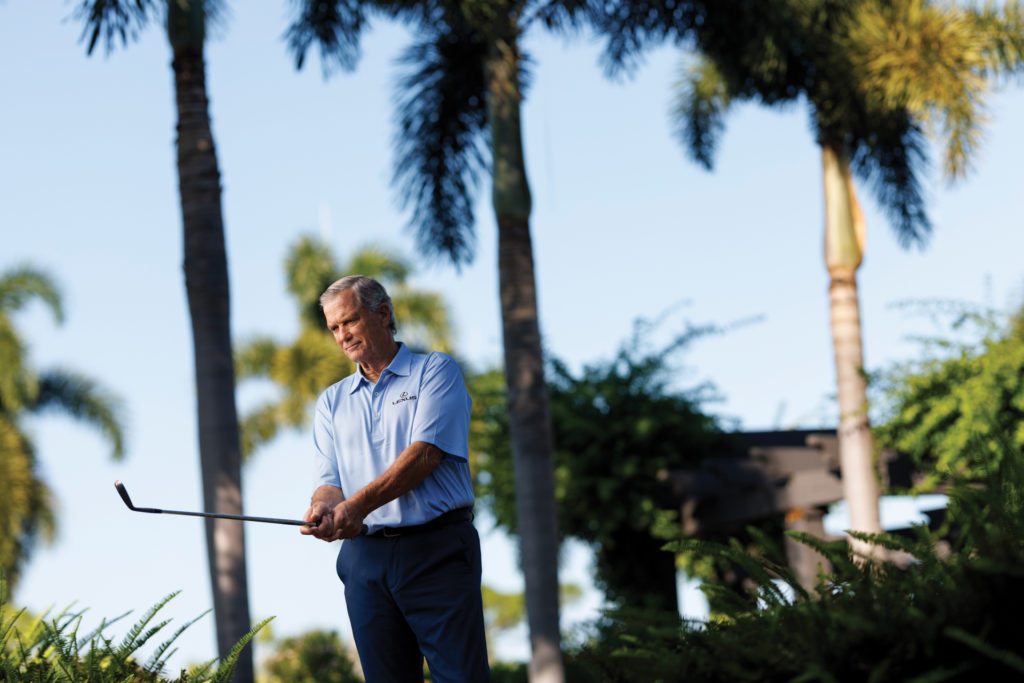 You never forget your first love. For some, it lingers in the back of their mind forever, prompting occasional musings of ‘What if?’ For others, such passion triggers a chain of events that shapes a life’s path. Golf was Peter Jacobsen’s first love, and it led him on a six-decade journey. Along the way, it introduced him to Southwest Florida, an area that the now-68-year-old, retired pro golfer quickly fell in love with and routinely supports through various philanthropic efforts.

In a not-too-common turn of events, Peter, a three-time All-American at the University of Oregon, made his initial mark on the golf world even before he was a professional. He won the Oregon Open as an amateur in 1976 and promptly turned pro after the victory. Just as quickly, he graduated through the PGA Tour Qualifying School (a series of competitive rounds played on courses with PGA Tour-caliber conditions). Since then, the Oregonian has remained a mainstay in the sport, winning 18 times around the world and nine times on tour, including two major championships on the Champions Tour (formerly, the Senior Tour). Now, with his professional career behind him (Peter retired in February), he frequently works in the broadcasters’ booth, providing insightful commentary for the Golf Channel and NBC as he assists with coverage on about 15 PGA Tour and Champions Tour events each year. “I still like being involved in the game, even though I don’t play it at that high level like I used to,” he says. “I like being in the arena, so to speak, and seeing the best players in the game-winning majors.”

Although often on the road, he’s called Bonita Springs home for almost 20 years. Peter’s affinity for Southwest Florida goes beyond its surplus of excellent golf courses. He’s attracted to the people, scenery and lifestyle that lure so many to the area. “This is like living in a wildlife preserve,” he says about the landscape and reliable thunderstorms. Being close to Southwest Florida International Airport also suits his jet-setting lifestyle, since he’s on the go every other week, following the PGA Tour to Pebble Beach in California or out to the Old Course in St. Andrews, Scotland—the birthplace of the game.

Today, many PGA Tour players pursue side hustles that leverage their recognition as well-known golfers or that align with a personal passion. Back in the late 1980s, Peter established Peter Jacobsen SPORTS, a marketing company that manages sponsorships at several tour events, and creates, manages and operates PGA tournaments paired with nonprofits. He’s had a substantial role in advancing the sport’s reach. Seventeen years ago, Peter recruited Lexus as one of the United States Golf Association’s major sponsors, and he’s secured other game-changing sponsors like CVS and Ketel One Vodka.

The company can handle any A-to-Z needs of the operation, from planning the entire event to having Peter emcee or play in the tournament. More recently, Peter has put that experience to good use close to home, involving himself with at least three events a year that support several local children-focused organizations, such as The Immokalee Foundation, the Naples Children & Education Foundation, and First Tee — Naples/Collier, which empowers kids and teens through golf. In March, Peter played in the 14th Annual Immokalee Foundation Charity Classic Pro-Am Tournament at The Old Collier Golf Club in Naples. “Philanthropy is in our blood as PGA Tour players,” Peter says, adding that every PGA event is linked to a nonprofit. “We all want to pass the baton and make things better for young people coming up behind us.”

Peter may not be competing professionally any longer, but he can still regularly be found teeing off, usually at Bonita Bay or Old Collier Golf Club. He’s also dabbled in course design, partnering with course architect Jim Hardy to build 13 original layouts across the country, including Naples’ private club Hammock Bay.  “When you design a course you almost feel like it’s part of your family,” Peter says.

Working with Jim, Peter wears designer- and player-consultant hats. He analyzes the quality of the shots that an individual hole (and the course overall) can offer, evaluates the level of strategy involved, and helps create a golf course that challenges good players but can be approachable and fun for the beginner. “We try to build courses where the greens are on the same plane as the fairway. We don’t create elevated greens that require an up-in-the-air shot. It limits who’s going to play your course successfully or enjoyably,” he says. “We like to always give players the option
to run a ball in.”

Winning tournaments and majors served as a strong ambition for Peter when he was on tour, but now that he’s retired, his goals have changed. He’s focused on staying healthy and active so  that he can continue to enjoy the game with his wife, son, daughters and sons-in-law, and his four grandkids, who range in age from 6 to 14. He passes his love of the sport to them. “Golf teaches you the proper morals and values. It teaches you self-responsibility. It teaches you etiquette, integrity, honesty: because we have to govern ourselves when we play,” he says. “This is not a team game … it’s probably one of the few games left where it’s up to you to be honorable.”