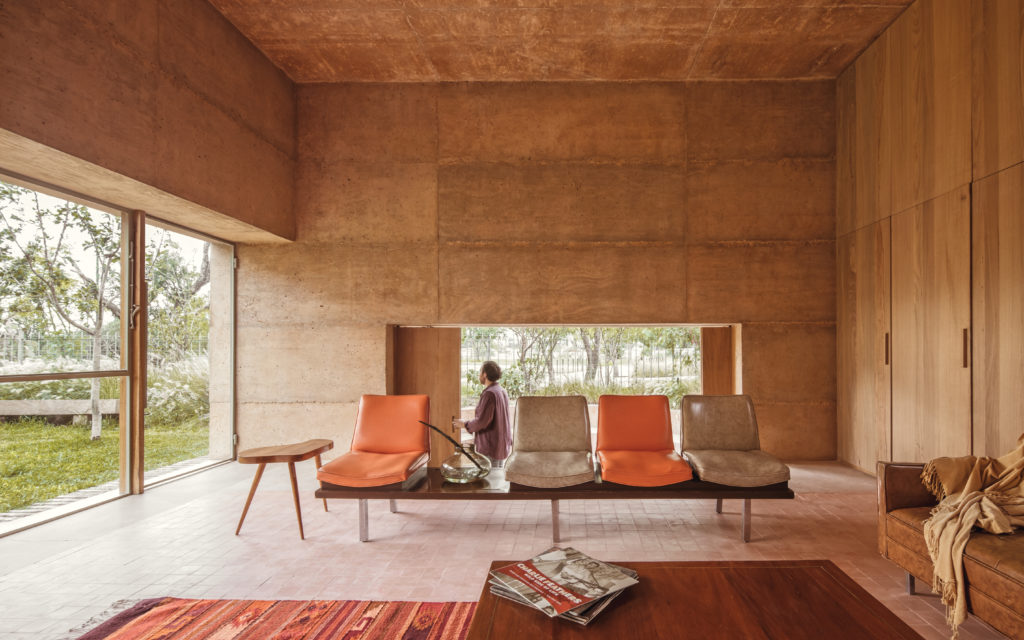 Casa Tejocote, in Central Mexico, mirrors the nearby colonial city-center and surrounding arid landscape with its rose-colored, concrete exterior. In Southwest Florida, heavy use of cypress wood and shellstone can deliver a similar synergetic connection to the Gulf setting. (Photo courtesy Gonzalez Muchow Arquitectura/ Ariadna Polo)

By and large, Southwest Florida’s calling cards are the climate and landscape, making indoor-outdoor living omnipresent. The best of local homes integrate natural elements inside and allow people to move seamlessly between sheltered and open-air spaces. When it comes to making the most of a privileged setting, few do it better than Mexican architects. We’re not just talking about floor-to-ceiling windows or living rooms that segue into lanais. Instead, think of the palaces of Teotihuacan, with rooms that flow barrier-free into terraces, and the colonial apartments of Mexico City’s historic center that are invariably designed around loggias. For centuries, new generations of designers have deftly built on and advanced the unique formal language created by their forefathers.

The country’s current indoor-outdoor typology was developed by Mexico’s modernist masters of the mid-20th century, who sought to integrate the new International style (the European-born aesthetic defined by cubist forms, open plans and large swaths of glass) with spatial qualities suited to local weather, lifestyle and cultural traditions. In famed modernist Luis Barragán’s homes, gardens are considered rooms, integrated into the house. Barragán’s peer and neighbor Enrique del Moral knew particularly well how to distill essential traits of his country’s character—a degree of introversion paired with a love of nature and gathering outdoors—and translate them into a blueprint that endures to this day. In his 1940s-designed Tacubaya home, the structure appeared cloistered when viewed from the street, but past that exterior, it was entirely oriented around outdoor spaces, with living areas that extended into the main garden through an open terrace and bedrooms that faced enclosed courtyards.

From the 1990s onward, the likes of Alberto Kalach and Mauricio Rocha came up with new solutions to create a dialogue between inside and outside, always mindful of Mexico’s rich legacy. More recently, contemporary firms have interpreted the influences to propose more original ways to create living spaces that maximize the landscape, ranging from large openings and strategic framing of vistas to areas that open fully and a carefully chosen materiality. Here are five examples that show the astonishing spectrum of how Mexico’s contemporary residential architecture blends the lines between interior and exterior.

A thought-out fluidity between in- and outside is a recurring feature in the striking homes Manuel Cervantes has designed in and around Mexico City. While some of his residential designs skew rustic, his own home and studio in the hills of Amatepec employ a contemporary minimalist vocabulary.

Distributed across several levels, the house responds to the topography of its narrow site on the edge of a steep pendant. He uses the site to enforce an unusual measure of permeability with the environment, which seems to flow fluently and gracefully in and out of the house. An existing jacaranda tree was the parting point for an aromatic garden that serves as an entrance path; a dramatic, spacious living room opens to the vegetation via floor-to-ceiling windows that pivot to erase any clear separation; and planted inner spaces encased in glass afford users a more private experience of nature.

As a result of these subtle gestures, you sense the climate even inside the house. Evincing Cervantes’ rare sensibility, the white brick exterior is covered with a ceramic layer, lending it an organic tactility that blends harmoniously with its green environment.

Begin with the Vegetation

History informed the design of the 2020-built Casa Mague, designed by the MCxA architecture firm led by Mauricio Ceballos in Malinalco, about 65 miles southwest of Mexico City. Given Malinalco’s pre-Hispanic significance as the location of an Aztec sanctuary carved into the mountainside, the architects sought to ‘excavate’ a contemporary refuge.

To respect the existing landscape of the plot—chosen for its natural exuberance and tall trees—a loose series of flexible, closed and open spaces wind around the vegetation. At times, branches protrude into the structure.

The concepts of indoor and outdoor are in constant flux, while contact between the occupants and the forest around them is maximized throughout. A range of design elements, from latticed screen walls to glazed enclosures, accentuate the seamlessness of indoor and alfresco areas. Often, Mexico’s contemporary architects resort to considered material choices to reinforce a sense of continuity between indoors and outdoors—earthy materials in neutral tones, such as stone and cement tiles, are often favored to make indoor spaces resonate with the surrounding territory.

The city of Querétaro is known for its rich colonial heritage, with a charming ensemble of churches and other historic buildings in tones of ocher and pale pink. With its high walls in pigmented rose-colored concrete, the striking Casa Tejocote, designed by González Muchow Architects, responds to Querétaro’s built vernacular, which itself mirrors the region’s arid landscape. Affording the resident family maximum privacy was a paramount factor in the design, accounting for an exterior of high walls that conceal four modules arranged around a central garden and connected by bridges. Precise incisions into the stone walls create openings that frame slices of the landscape and create a strong link to the outside world from within the house’s shelter.

The natural material palette actively engages the environment, allowing sun rays and glimpses of the verdant exterior to set the home’s mood at any given time. Every space at Casa Tejocote is partially open, connecting to a courtyard or garden. In an evolved way, the modular, patio-centric design of the house is a distant descendant of del Moral’s Tacubaya prototype, respecting its users’ need for moments of solitude while incorporating ample opportunities to experience nature and spend time with family and friends. Among Mexico’s numerous excellent female architects, Fernanda Canales has made interpreting the patio a hallmark of her practice. Variations of the courtyard appear in a diverse range of her projects, often woven in as effortless extensions of indoor spaces.

Canales designed Recreo House in 2017 from local materials—gray stone, clay tiles and timber-—in Valle de Bravo, a mountainous town known for its microclimates and lush landscape, the product of steady rainfall for several months of the year. For the project, Canales set out to rethink the potential of a central open space to make the weekend retreat for a family more attuned to its environment, while enlisting the dramatic sensory qualities of the setting as integral elements of the house’s spatial experience.

The main patio acts as the focal point, connecting access, service and private areas to the generous social spaces for entertaining and family gatherings. Forging an extreme openness, the dining and living areas are situated between the primary courtyard and a large terrace with a pool and majestic views of the landscape.

Meanwhile, resting areas are arranged in an L-shape wing near a more intimate patio that fuses the wild surroundings with the home and supplies each family member with a generous degree of privacy. Breezeways connect the bedrooms, generating interstitial spaces that are technically outside yet covered.

Enclose the Exterior; Open the Interior

Casa Zicatela, in Oaxaca, represents a radical paradigm that would be difficult to replicate anywhere else. Yet, it offers a valuable lesson about the extent of architectural openness that can be achieved with ingenuity.

Designed in 2015 by the French-born architect Ludwig Godefroy on a hill overlooking the Pacific Ocean, the compact weekend house, near Puerto Escondido, is built almost entirely out of silvery concrete. Conceived as a ‘country house by the sea’ rather than as a beach house, the project’s defined by its artful rawness and striking duality. Like Casa Tejocote, its fortified exterior enables a high level of protection and privacy in the exposed landscape while echoing nearby mountains.

Once within its walls, open space abounds, giving the user the sense of a mysterious concrete playground devoid of conventional boundaries between inside and out. In Casa Zicatela, an arrangement of staggered and rotated elemental spaces evoke Mesoamerica. Rooms are organized around a garden, with an open-air corridor and loggia-like areas erasing usual notions of interior space. A central structure contains a living and dining room and the kitchen, which spill out to the courtyard uninterrupted (a union underscored by flush floors). Steps on both sides of the garden—reminiscent of a Mayan pyramid—lead to a second level, which serves as an observatory to admire the surrounding landscape.

The result of the labyrinthine layout is an exquisite bunker designed to soak in the vibrant blue of the sun-drenched sky, an element as essential to the house’s experience as its concrete walls and contrasting wood details.