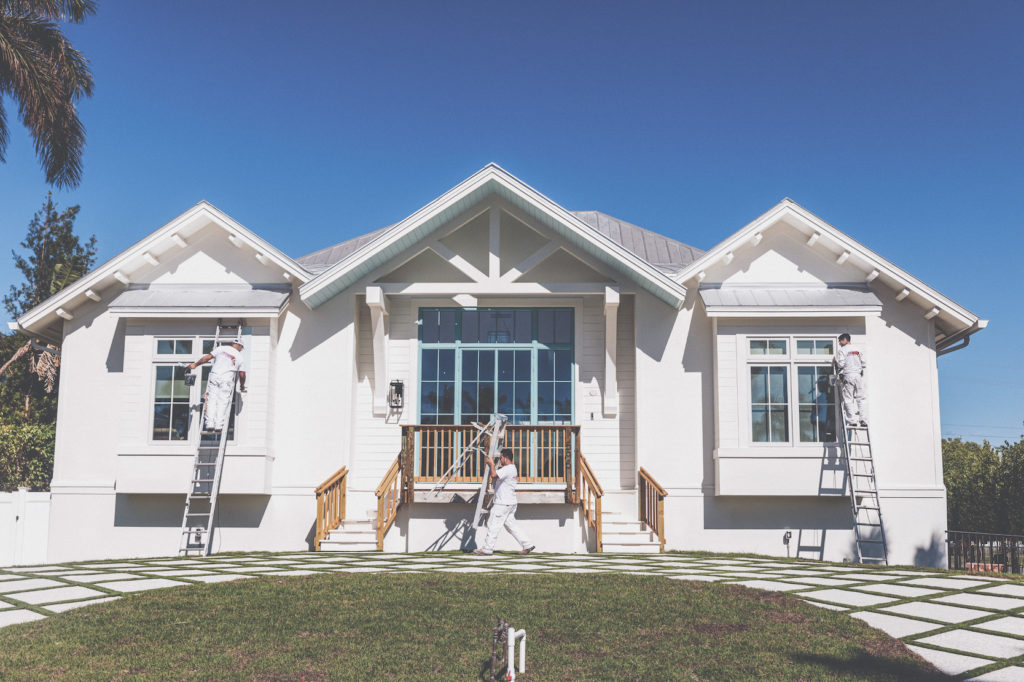 Cottage by the Sea

One major question that remains after the storm: Do we rebuild? It’s especially sensitive for owners of historic homes that define our region’s character. For Tom Lykos’ client, the answer was a resounding ‘yes.’ The German transplant always dreamed of living in a charming home by the sea, so when his 1950s, Old Naples cottage was damaged in the storm, he was intent on rebuilding. Built below flood level, the home’s interiors took in nearly 4 feet of water and sand piled up in the backyard, reaching up to Lykos’ knees. But the structure stood strong. Now, Lykos’ team is in the middle of a $1 million renovation on the property, updating the home to meet current codes by reinforcing the foundation, and adding engineered strapping and fasteners to wood frames in windows and walls. A newer, in-progress build on the coast of Marco Island proved these methods effective. “This one suffered no flood or wind damage,” Lykos says. “It’s a true testament to new codes.”

One of the first to step up and help after the hurricane, designer Dwayne Bergmann teamed up with other industry pros to launch Designers + Builders Unite. The day after the storm, Bergmann was driving back and forth to the east coast, with his young twin sons in tow, to distribute truckloads of supplies. Now, when he’s not working on charitable relief efforts, Bergmann and his team are focused on three clients whose homes were affected. He’s hired extra staff to address the needs, which includes everything from replacing cabinets to coming in with all new furnishings.

It Takes a Village

The community’s ability to uplift and support each other in the face of adversity is evident as neighbors step up to remove debris, offer shelter and band together to recuperate what was damaged or lost. Big Island Builders paused new jobs to help restore Naples’ Tree of Life Church, as well as six congregants’ homes nearby. “In the first service after the storm, the pastor asked all who lost their homes in the surge to stand, and almost one-third of the people stood up,” Big Island’s Jay Bowerman says. Meanwhile, Fort Myers’ 50-year-old Marvin Homes is working on a storm-safe concept to restore one of the historic wooden cottages wiped off the north end of Fort Myers Beach. They hope to redo the rest of the neighborhood, too. In Collier County, Calusa Bay Design’s managing director Randi Scott and her husband are flipping their Goodland home, which had to be gutted to the studs. Since the home was originally purchased turnkey, Scott’s making the most of the situation and customizing her space to her tastes.

Boots on the Ground

Leigh Gevelinger’s business, Coastal Vista Design, lives on Sanibel Island. Her office on Palm Ridge Road was decimated by the wind and water. Still, right after the hurricane, the landscape architect was hitching boat rides to the island and biking through the debris-ridden roads to survey her coastal projects and snap photos for clients. “Without a doubt, this storm is like nothing I’ve ever seen,” she says. She’s now working with her team to study plants that held up the best (native sabal palms, sea grape, muhly grass, to name a few) and salt-tolerant soils to rebuild resilient landscapes that can help protect homes in future storms.

Rollin’ on the River

Designers have a heavy charge, tackling interiors that are structurally sound but need a lot of work to make them livable again. One of Alexis Limb’s prized projects was all but destroyed by water that rose from the Caloosahatchee River. All that remained was a Hazelton Brothers piano. “Almost all of their possessions were lost, everything covered in saltwater and tossed around only to land wherever the water receded,” Limb says. The designer quickly drafted plans for the rebuild, including adding a swanky cigar bar to rival the home’s previous creature comforts (wine cave, putting greens, boathouse). The owners are eager to return home. It’s a sentiment that rings true with everyone we spoke to: A hurricane will not keep us away from Southwest Florida’s alluring, albeit temperamental, setting.