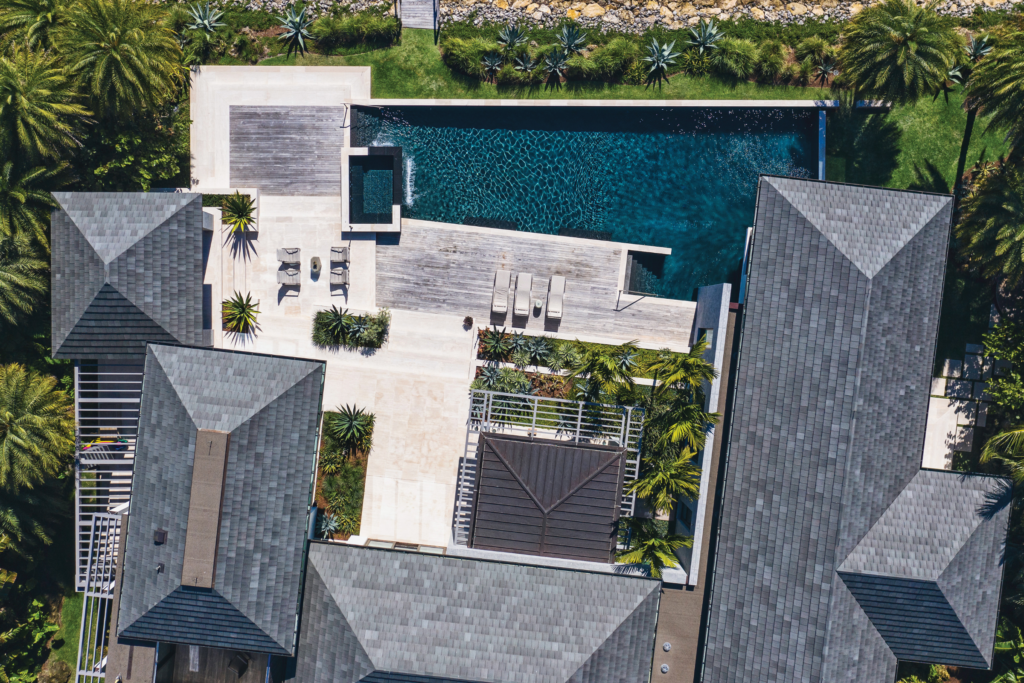 Drawing from Southeast Asian architecture, Leonardi designed the compound as a series of spaces connected by glass-enclosed areas. Around the property, Gardenbleu’s Edward Westwood created a pared-down topography that pulls everything together. (Photo by Nick Shirghio)

Waterfront homes in warm climates can easily fall back on a series of design clichés. Naples architect Mark Leonardi, however, seeks to go beyond trends and typical coastal living concepts to create new paradigms for homes that are at one with their surroundings.

On a nearly 1.5-acre lot on Naples Bay, he reexamined ideas of public and private areas, using a series of connected spaces to craft a home that feels intimate and open. There’s meticulous attention to detail in everything Leonardi does.  He may consider the joinery and how to make it invisible; create recesses in the ceilings to make walls appear as if they extend ever upward; or finish a roof with a copper cap, intentionally repeating the metal in often-overlooked areas on eaves and under cantilevers.

All these elements and more are present in the Port Royal residence that Leonardi calls his most involved to date. The layout derives partly from the homeowner and Leonardi’s interest in Southeast Asian architecture—and the way people relate to their surroundings in these places, which have a similar climate to Southwest Florida. Many of the rooms found inside in the U.S. are outside in Asian countries. “In Indonesia, the bedrooms are typically the only parts of the home that are climate controlled,” he explains.

Southeast Asian homes also often have open walkways between rooms. Here, Leonardi implemented the concept with place-appropriate adjustments. The building manifests itself in a series of spaces connected by glass-enclosed areas. To retain the sense of openness, Leonardi largely eschewed doors, instead playing with the layout and distance between rooms to provide privacy and create interest.

At the entrance, a flamed Spanish limestone wall serves as the primary organizing element for the floorplan. The wall extends from the driveway into the forecourt, then breaks off into columns before continuing inside the eastern wing, which contains the kitchen and other service areas downstairs, and the guest bedrooms upstairs. Here, the limestone separates the first and second floors. At the other end of the home, another limestone wall shows up to delineate the living room and primary suite. “There’s an ambiguity about the entrance to the [primary] wing,” the architect says. “You’re not really looking for a door to the bedroom; it’s more about a sequence of spaces.”

Within the primary suite, which cantilevers over the pool, a pocket door separates the bed and bath. Strategic wall placements and small openings create separation without compromising flow. Walls of windows, framed in thick mahogany, bring the landscape in, while clerestories (which continue around the nearby living room) bring in varying light throughout the day.

Teak screens prominently repeat themselves throughout, beginning at the entry gate, where they serve as an introduction. Horizontal versions line the forecourt, defining the space and adding texture; in the case of the second-floor guest rooms, visible from the street, they provide privacy. The slats, which continue from an interior courtyard into the eastern wing, frame the stairway and contrast with its vertical bars. Leonardi’s attention to detail is again evident in the screen’s strong, clean bridle joints. “A lot of thought went into not only the joinery but also the concealment of the joinery. So when you look at these screens, you can’t see where they’re attached,” he says.

The stairway leading to the guest rooms is a marvel of engineering. It was pre-assembled in Boston, broken down, shipped to Florida and reassembled onsite. One of the vertical, 1- by 3-inch solid steel bars weighed more than 300 pounds.

Leonardi handpicks collaborators and cultivates lasting relationships. One person he often turns to is builder David Rogers, of Naples-based Newbury North Associates, with whom the architect has worked for nearly two decades. “This home epitomizes about 17 years of developing details with Dave,” Leonardi says. “The project would never have happened without him.”

Leonardi’s love of detail is born, in part, from his appreciation for the work of the Italian architect Carlo Scarpa. “His attention to detail—the smallest detail—is exquisite,” he says. “When we have the chance to do something like this, I always have him in mind.” The architect references Scarpa in the forecourt’s geometric water sculpture, which Leonardi designed as a folly to create a sense of movement and provide a visual anchor inside as you walk from the primary wing to the living room.

Interior views are framed by Gardenbleu’s Edward Westwood’s landscape artistry. Coconut palms, saw palmetto and traveler palms create a topography around the property with a reduced palette that mirrors the intentional minimalism in the use of building materials—mostly mahogany, teak, oak, Spanish limestone and Portuguese limestone. Rather than having a mishmash of vignettes, the palm trees and saw palmettos are carefully planted to bring everything together. “There is a real spatial attitude with the way the palms [establish themselves] throughout the whole site,” Leonardi says.

Water is another organizing element. Whether inside or out, you’re often near water, sometimes separated by glass. “This becomes part of the sequence,” Leonardi says. As you walk closer to the building in the front, the limestone wall begins to fragment, and within that fragmentation, it becomes a rippling fountain. “It follows the wall and everything revolves around it on the front entrance,” he says. The scene is breathtaking when illuminated at night. Other small fountains are seen from hallways—one at the end of a long pool that terminates in front of a floor-to-ceiling window.

The entryway water feature ends near the royal poinciana out front—a remnant from the previous home that the new owners wanted to keep. The tree lines up perfectly with the entrance. “I can’t take credit,” Leonardi says. “I knew the tree would be somewhat of a focal point, but it lined up as if it was intentional.” To mark the end of the built and natural environment, the team placed caprock at the end. “Instead of ending on a straight edge, landscape overtakes the water feature. The water slips underneath and you don’t know where it ends,” he adds.

The intentionality continues with the art inside—mostly midcentury abstract expressionist works by female artists. Some, such as Elaine de Kooning and Lee Krasner, were wives to more famous husbands but received far less recognition.

Along the primary wing’s limestone wall stand three of the homeowner’s prized sculptures of deities that represent east, west, north and south. “She wanted them to be more part of her space and to be able to see them every day,” Leonardi says. The fourth deity is placed within the living room bar (which can hide behind retractable stained white oak doors) on a parallel wall. When the bar’s open, you see the fourth deity in a niche with the exact 10- by 12-inch dimensions and placement as if it were grouped with its companions.

A cast glass sculpture by Czech artist Stanislav Libenský sits at the end of the hallway in front of the primary suite. At certain times, it becomes a prism, drawing light from outside and reflecting it on the floor and walls. Looking beyond, one can catch a glimpse of the pool and the bay. In many ways, the sculpture—another serendipitously placed element—perfectly symbolizes the entire house.