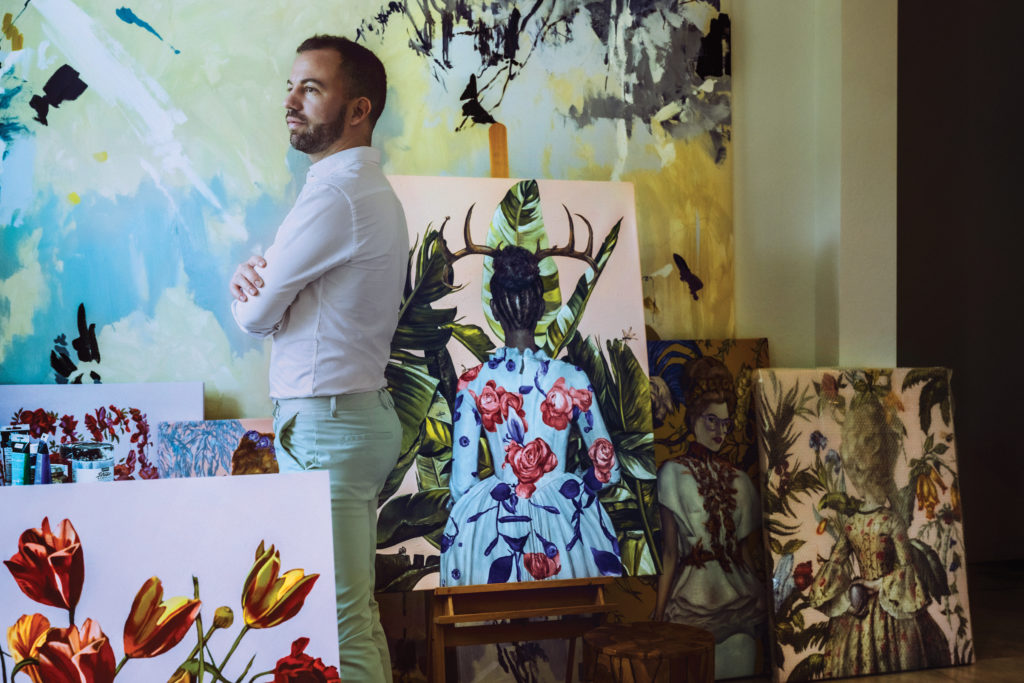 Carlos Gámez de Francisco remembers his mother buying a new sofa in his hometown, Holguín, Cuba, when he was 15. “My mom saved her money for almost two years. She finally bought the sofa but then covered it in plastic. When we’d have guests, she’d uncover the plastic but would ask the guests to sit on other furniture. I always saw it as a museum piece,” the Fort Myers-based artist says.

Fast-forward a few years later, when the painter and photographer was living in Kentucky. “Some of my collectors had big farms with big, beautiful, hundred-year-old sofas in the same places as their horses,” he recalls. He created a series of paintings with horses traipsing on settees, witfully named Keep Your Pets Off the Furniture. Collectors in the Bluegrass State clamored for the pieces.

Gámez de Francisco’s exuberant work is laden with symbolism. Consider the unassuming insects that flit around most canvases: “If they’re flying, it means freedom; if they’re falling, it’s chaos; and if they’re lying down, it’s balance,” he says. He began integrating flowers over the last few years, representing the current stage of his life. “When I came to the States, I called it my dark period because everything was so overwhelming,” he says. “And now, there’s so much color and beauty.”

Gámez de Francisco’s father emigrated to Louisville, Kentucky, in 2001, and he longed to follow. His mother insisted he stay in Cuba and finish his education—a difficult call for an aspiring artist. “Art supplies were very expensive,” he recalls. “A tube of oil paint cost $4, and my mom only made $20 a month.” He used whatever he could find, painting on cardboard and blankets instead of canvases. He scrounged for old oil paints left behind by Russian art professors who lived and worked in Cuba when the Soviet Union supported the Cuban government. He often had to boil the paints in water and mix them with diesel to resuscitate the derelict materials. His teachers had also adopted the Russians’ highly disciplined techniques for traditional drawing and painting, which the budding artist embraced.

After Gámez de Francisco finished his studies in 2019, he arrived in the U.S. with little cash—or English. He worked a shipping and receiving job during the day, took English classes in the evening and painted at night. “I slept for only five hours a day,” he says. An English teacher began introducing him to galleries, and his career took off meteorically. Within four months, he was painting full-time.

Keep Your Pets Off the Furniture includes many elements that run throughout Gámez de Francisco’s oeuvre: ornate furnishings, toile wallpaper, Pantone color palettes and theatrically posed subjects—most are painted in acrylic and watercolor or photographed. The Regency-inspired creations often showcase lithe, mysterious women dressed in elaborate period costumes, sitting inside illustrative interiors. “I try to combine things from the past with contemporary things because I believe that we need to learn from the past to build the future,” he says. Given the scarcity present in his upbringing, it’s easy to understand Gámez de Francisco’s unabashed, 21st-century take on rococo. He doesn’t just depict the sort of antiquated luxury that defined the era but uses it to enthrone contemporary models who wouldn’t have fit traditional class roles.

While studying at the School of the Art Institute of Chicago, he delved deeper into Renaissance techniques. “I started there by copying Renaissance paintings,” he says. The more he studied, the more he pondered over the subjects’ settings—and their attire. Soon, he was taking more fashion design than fine arts classes. “We had to be able to draw models in one or five minutes,” he explains. “You learn to express yourself in just a few seconds and how to show movement.”

The artist moved from Kentucky to Fort Myers two years ago. “I wanted a house close to the ocean,” the native islander says. He now works out of his Lehigh Acres home—an uncluttered, neutral space that allows him to focus on the intricacies of his work. There’s a drafting table in one area; in another, a midcentury-modern table is precisely lined with rows of paint tubes; and a couple antique chairs interspersing sparse, contemporary furnishings in the nearby living room. “I don’t even have art for my own walls,” he says. With 25 galleries now representing him, his work gets shipped out as soon as it’s finished. “People ask me, how can you have so many paintings done? I paint every day, for 10 to 14 hours a day. But it’s not work, because it’s my passion.”

He also exhibits his prolific photography of Cuba’s youth, which he captured when he returned five years ago, camera in tow. “When I lived there, I didn’t have access to internet or a cell phone,” he recalls (the government blocked citizens’ access to both up until only a few years ago and still shuts it down during times of protest). “I wanted to see what the youngest generation is like, with access to these things.” What he found was a newfound confidence and mien akin to the nobility captured in Renaissance portraits. He scrounged in the trash for materials to create similar lavish costumes and rich scenery to photograph his young subjects. “If you look closely, you can see that the sets and clothes are made from things like old chair seats and Brillo pads,” Gámez de Francisco says.

Many of the subjects in his photography and paintings wear masks: maybe to disguise—or, in the face of political oppression, shield—their identities behind ornamental facades. It’s a telling technique for the artist who revels in capturing expressions and whose work, at first glance, could be mistaken for a glib celebration of all that’s superficial. In the droller portraits, the subjects’ enigmatic, aloof demeanor speaks volumes. They remind us that all that glitters isn’t gold.