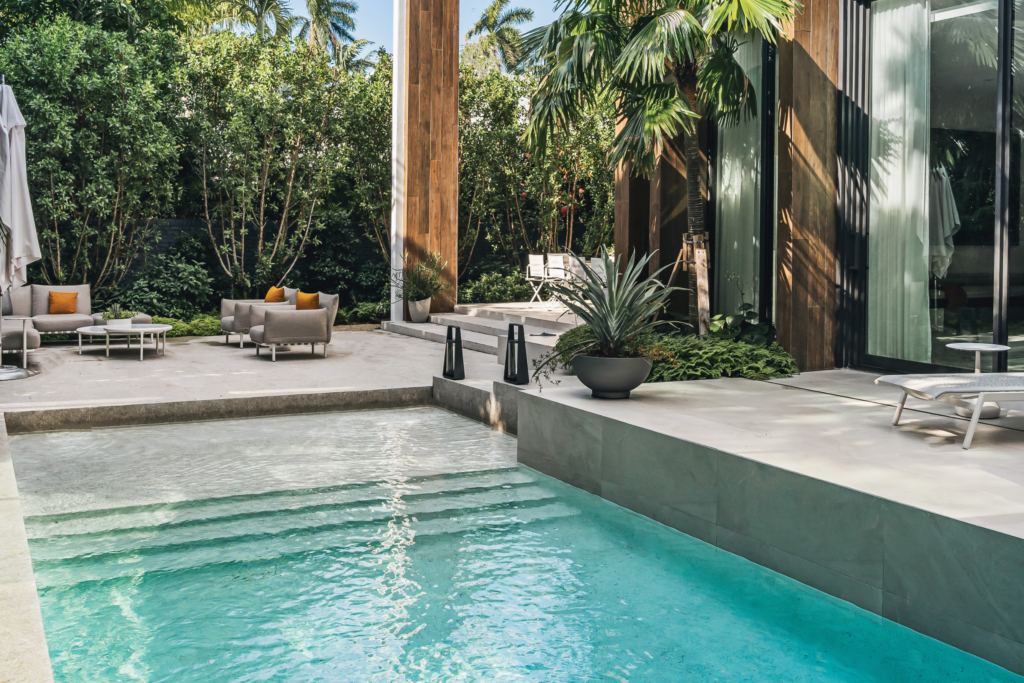 Max Strang refers to his architectural style as “environmental modernism.” These are climate-driven, site-specific designs that respond to the setting. (Photo by Venjhamin Reyes)

“I wanted something very transparent,” says architect Max Strang of the glass-clad home he designed on tony Sunset Island in Miami’s Biscayne Bay. His firm, Strang Design, is celebrated for its waterfront properties, in which such openness would seem almost a given. Here—on a roughly one-third-acre, landlocked lot—it is a particularly daring choice. With no solid wall between the house and the street, you can see through the structure into the backyard. “Even though it’s on the ground, it feels like a tree house,” he adds. And while such a structure could leave its inhabitants feeling exposed, Strang’s clever design—along with some thoughtful landscaping—lends a sense of privacy.

To achieve this balance architecturally, a series of deep ‘fins’ run from the ground up to the roof and around the building. Unless you’re looking at the home straight on, it reads as fairly solid. “The design’s intentional asymmetry and consistent vertical lines naturally draw the eye upward, lending intrigue,” he says. The fins also soften the direct sunlight coming in, while the double-height windows allow a lot of indirect light from both sides to enter the somewhat narrow structure. This minimizes solar gain and the need for artificial lighting during the day, factors that are key to Strang’s approach. “Environmental modernism is in our firm’s DNA.” The passive design also allows for excellent cross ventilation, maintaining a delightful temperature for several months during the year, that is, when it’s not stiflingly hot in Florida.

Although the house appears to be built out of wood, the exterior is clad in thin slabs of porcelain tile imported from Italy, supplied and installed by Naples-based EBL Partners. The product has several advantages over wood, EBL’s Audrey Healey says, including durability, which is important in this hurricane-prone region. It can, she says, also be printed to look like a variety of hardwoods as well as stone and concrete. “The technology is just so much better as far as the graphics on the tile that make it appear like whatever it is you’re going for. It used to be so obvious, but now a lot of people can’t tell the difference.” In other places, such as the pool area, it is easier to install than the concrete it resembles.

For Strang, the choice between wood and tile is a constantly recurring conversation with his clients in the subtropics. “The question is whether they want to constantly maintain real wood to keep that rich, deep color,” he explains. (Without maintenance, wood in this climate will eventually turn heather gray, with a more beachy look.) Porcelain means a lasting and dependable, warm appearance without all the bother.

The home was originally built on spec for the Cadus Corporation, whose brief to Strang was minimal: maximize the square footage allowed by local zoning. Otherwise, Strang and his collaborators were given free rein. After the house was purchased, the homeowners hired Bartroli Architecture to take on the landscaping and furnishings, as well as some additions to the interior, including built-in cabinetry and wall units, plus new appliances and other modifications to the kitchen. Outside, Bartroli—in collaboration with landscape architect Mauricio Del Valle Design—created a graceful entry and provided privacy from the street view, around the pool and side yards—plus fencing, decking and exterior lighting.

The 5,500-square-foot, five-bed, six-bath home has two floors. Among the second-floor rooms, Strang placed “stealth balconies” (named for their secluded presence under the overhangs) between the hollows of the soaring fins.

Furnishings are generally low to the floor, allowing views to remain unobstructed from almost anywhere in the house, while floor-length window sheers allow light to be filtered but never blocked. The palette is largely made up of grays and browns. When other colors pop in, they are frequently inspired by the world outside the windows—pale greens amplifying the connection with the foliage or tropical blues echoing the pools and bay.

Divisions of space are minimal, with slatted panels providing separation while remaining open. “The vertical louvers on the inside take their inspiration from the exterior architecture and scale it down for the interiors,” Strang says.

In the immense kitchen, a long counter provides ample space for prepping and serving casual meals. The consistent wood used for cabinetry, storage, appliances and under the island is another unifying and calming element, as is the stone in the matching backsplash and island. There are no bulky pendant lights or weighty chandeliers here—only recessed lighting and a mobile-like fixture.

The primary suite continues the downstairs vibe, with a muted array of grays, charcoals and beige, and floor-to-ceiling windows that make you feel like you’re sleeping in a treehouse. Clothing retailers could learn a thing or two from the wall of meticulously laid out and well-lit closets behind glass doors that turn the owners’ wardrobes into something of an art installation.

Outside, a series of pathways made from slabs of porcelain tile meander through the dense plantings. A different scale of louvers creates a secluded backyard with stone benches, planters and minimal furniture. Nearby, the elongated pool deck has some areas directly accessed through sliding doors and others reached by wide steps—the whole space takes advantage of the shelter provided by numerous trees. “We definitely wanted to create the feeling of an oasis,” Strang says.