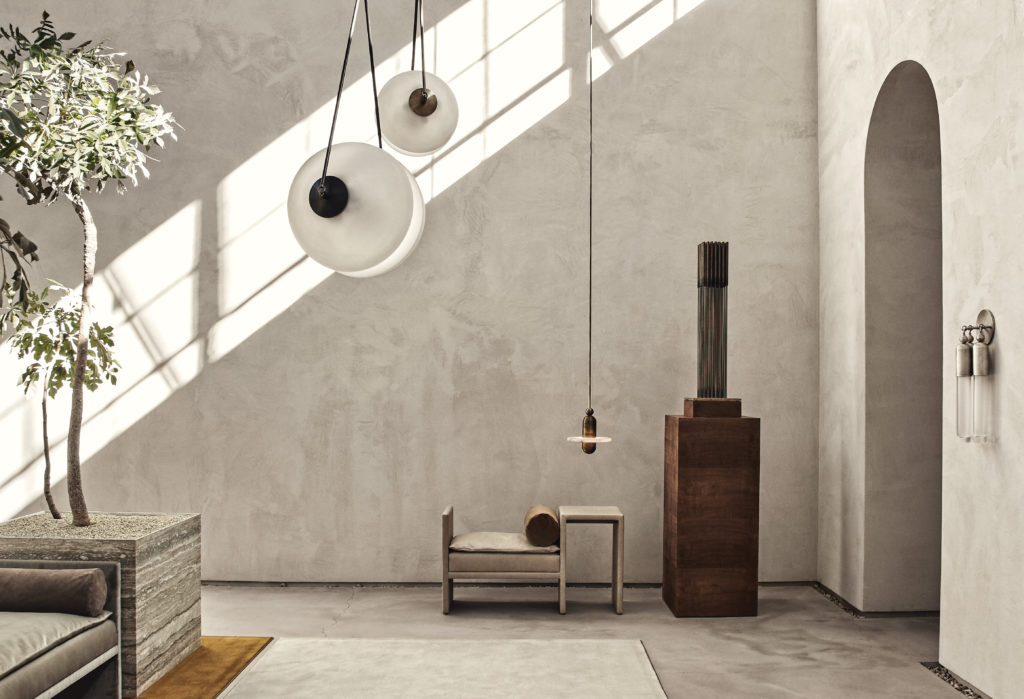 Some may think it’s a little ridiculous to say Venetian plaster is having a moment. Can something that’s been around for thousands of years be considered on-trend? While the material—a mix of limestone and marble—can be seen on structures as ancient as the Pantheon, today’s craftspeople apply it in modern ways to add character. “Because of its origins, there’s certainly an Old World aesthetic tied to Venetian plaster,” interior designer and founding director of METHOD & CONCEPT Chad Jensen says. “The application has stood the test of time due to its longevity and beauty, and if done well, it’s a timeless design element. Though, admittedly, there have been periods in design of gross overuse and distasteful interpretation.”

Rather than focusing on the gold palette and heavy applications found in the Tuscan-inspired homes of the nineties, contemporary applications play with texture, color and placement for a sleek effect. You might see a minimalist kitchen with a standout range hood plastered in bronze or a dining room with contrasting navy and gray matte-like walls. In a Mystique condo, Jensen commissioned Florida-based Venetian plaster master Ron Francis to do a high-sheen white Venetian on the ceilings and the walls surrounding a narrow staircase to make spaces glow.

The term ‘Venetian plaster’ has become a bit of a misnomer—people see plaster on a wall and automatically refer to it as ‘Venetian.’ That would be a mistake, Christopher O’Guin, of Naples-based O’Guin Decorative Finishes, notes. His family has been transforming walls since the 1980s. “There are people who call anything that’s not paint ‘Venetian plaster,’ but true Venetian plaster—stucco Veneziano—is a lime plaster made with fine marble dust,” he explains.

Venetian plaster is a fully natural material that allows you to have the Earth on your walls. As each thin, translucent layer is applied, the plaster is compressed and burnished, revealing an iridescent finish with depth and movement. Francis does the work by hand. “Despite all the new and ‘innovative’ technology, I remain a purist,” he says. He’s been at the forefront of the industry since 2008, showing off the techniques online and teaching classes. “Venetian plaster is translucent,” he notes. “You lay it and lay it and lay it—both consistently and randomly. You’re creating a methodology, and then it’s like having five windowpanes that you can hold up to the sun, and you see can through every layer and get all of the movement. When it’s all done right, you’re pulling out love and movement from underneath, and you’ll see it through every layer.”

The finish can be troweled on until it achieves a high-gloss effect that looks like solid marble. Modern makers have also come up with unique iterations. Kim Collins, co-owner of New York-based Kamp Studios, a leading plaster finishes company, and her team developed a sculptural fluted plaster application, as well as a distressed matte finish that’s made an appearance on recent covers of both Elle Décor and Architectural Digest. “It’s such a great backdrop to everything else; it’s not trying to be the frontrunner. For me, it’s way more interesting. The subtle finish speaks to the architecture, even in a space you might not think is right for plaster,” she says.

For those who can’t choose between shiny or toned-down gloss, Jensen says mixing finishes can work, if executed well: “It’s all in the application, color and movement of the finish, combined with the sensibility of the space. Venetian plaster is also nice to use as an accent feature, as opposed to the entire space.” O’Guin, who has also worked with Jensen, comes up with chic combinations: “A shiny ceiling reflects light beautifully, especially in a beachfront property with good western exposure to the water. It also looks good with cove lighting because of the reflective quality. Then we’ll bring in a velvety Marmorino on the walls.”

A little Venetian plaster can go a long way. Although no one could call artist Michael Browne’s abstract works ‘little.’ His massive canvases get at least 20 to more than 60 layers in various colors and textures. Browne takes commissions and sells his work through Judith Liegeois Designs & Gallery (starting in February, he’ll do demos there every Thursday night). He was introduced to the material’s possibilities when he helped plaster a home office years ago. “The homeowner’s office had a gorgeous view, but his back was to the Gulf,” he says. “We did white Venetian, polished it and burnished it, and then you could see the reflection of the water in the walls. That’s when I fell in love with it.”