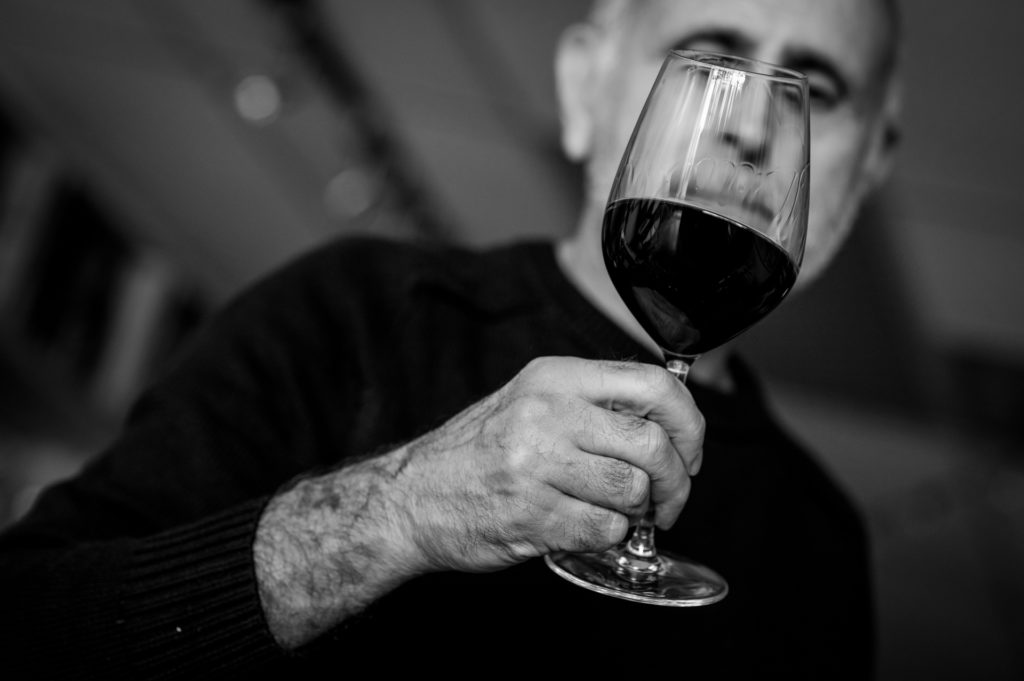 The shift toward easy-drinking wines has diners pursuing bottles from Italian regions. Natural Wine Naples’ owner Peter Rizzo points to vinos like the fruity and floral Foradori Teroldego 2021 from the Trentino-Alto Adige in Northern Italy. (Photo by Anna Nguyen)

Sometimes all it takes to raise a grape’s profile is a box office hit. The 2005 Academy Award-winning film Sideways transformed thin-skin, temperamental pinot noir into a California superstar and boosted the state’s production by nearly 170 percent in the time since.

Over the years, more diners shifted toward light-bodied wines that are easier to enjoy in warm weather like ours. The move opens up a world of terroir-driven wines—some of the most captivating being light-bodied bottles produced in Italy, which offers strong value in the light reds category, thanks to the abundance of lighter-bodied indigenous grapes grown in lesser-known regions.

Red Burgundies are an approachable gateway into the world of light-bodied, lower-alcohol reds: They’re a familiar grape from a recognizable Old World wine region and carry a similar prestige to the grand châteaux of Bordeaux. But, unlike Bordeaux, they’re more food-friendly and easy to sip, even on the most sweltering days.

At Angelina’s Ristorante in Bonita Springs, the Italian-centric cellar offers more than 600 choices. While some regulars want rare, highly allocated pinots, assistant general manager and sommelier Nick Kattman also sees a trend toward the Sicilian varietal nero d’Avola. “Like chardonnay, it can be manipulated to be soft and delicate, or bold and robust,” he explains, adding that lighter nero d’Avolas are great in-between wines, pairing beautifully with fish and lighter dishes, like slow-braised osso buco. “A lot of the time, we’re pushing toward softer reds and introducing guests to varietals they haven’t experienced before,” he says.

Among those is the 2013 Scarbolo Refosco from the Friuli-Venezia Giulia region of northeastern Italy. The family winery is credited with reviving the refosco grape, which was thought to be lost until it was found growing on a neighbor’s mailbox. The resulting wine tends to have soft, silky tannins with blue and red fruits on the nose and palate.

The popularity of Sicily’s Mount Etna wines over the past few years also shows people are looking for wines similar to pinot, but from regions they haven’t considered before, says certified sommelier Piotr Lewandowski, half of the wine team at Naples seafood institution USS Nemo. “The [increasing] price of more famous appellations is making people explore other options,” Piotr explains, adding that wines like Barolo, Brunello and Amarone have jumped in price over the past five years and can now go for about $150 on a restaurant wine list. “Instead of going for that bottle of Amarone, diners will try something lighter in body and tannins, like a simple Valpolicella [red blend].”

Light reds are also a staple of the natural wine movement. “Generally, in the U.S., people like reds more than whites,” says Naomi Biber, sommelier and co-owner of Cape Coral’s Palace Pub & Wine Bar, where they sell three times as many red bottles as white. Palace Pub focuses on natural wines crafted from organic grapes with minimal intervention. Made without chemicals, additives or processing aids, the wines tend to be lower in alcohol and spotlight lesser-known grapes from small vineyards. “Similar to how craft beer exploded, you’re seeing that now with lighter, natural red wines, which are more accessible in average price—and also made by a real person, not in a factory,” Naomi says.

Small vineyards are particularly adept at the trend, says Peter Rizzo, owner of Natural Wine Naples. These producers can delve into different styles because they’re not dictated by the “marketing machines that drove the message of big, bold reds for so long,” he explains. One favorite this season is Vini di Giovanni Il Rozzo, a sangiovese from Umbria, in central Italy. Vintner Giovanni Mesina’s primary business is producing milk and pasture-raised meat from a flock of more than 1,000 sheep, but he also has a tiny wine production. Initially sold only to those in the area, the earthy, juicy red is slowly seeping into the United States.

Exciting discoveries like these are leading people down the path to fresh alternatives. “I don’t know if big wines are over, but I do know there’s an interest in lighter wines, and people are exploring other options,” says Liset Zelaya, a sommelier and the director of wine and spirits at Sea Salt in Naples. “I’m a huge fan of lighter style wines because there’s nothing to hide behind—these wines are so transparent in flavor and origins. They have to be good quality to express themselves the way they do.”