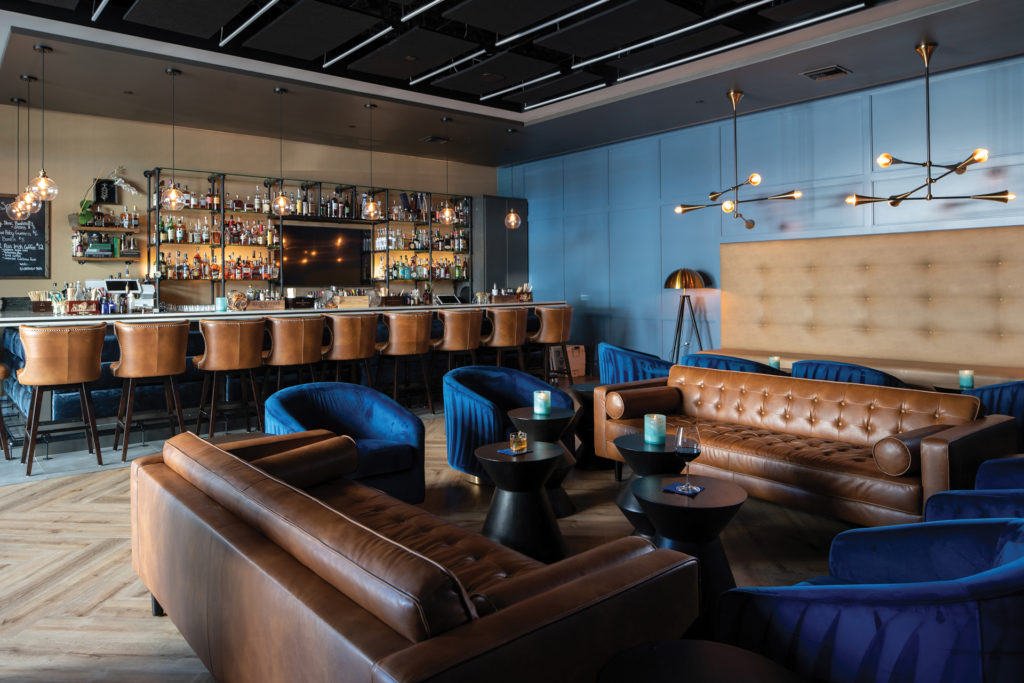 Marty Kenney noticed something missing in Naples: A true cocktail bar. “The majority of people in Naples are transplants, so they’re used to having cool craft lounges and neighborhood bars,” he says. “I wanted to create an atmosphere different from the restaurants downtown.” When the time came for him to fill the void, he pulled inspiration from his travels around Europe and to major cities in the United States.

So, in late 2019, Marty opened Sidebar, a stylish bar that marries elements of the cocktail culture he’d experienced in New York and London. Named after its location on the side of a three-story condo building on Fifth Avenue South, the 1,500-square-foot space was designed by Naples-based Natasha Pereira, owner of NP Interior Design. A lapis-hued wall frames the room, anchored by a white onyx bar with globe-shaped glass fixtures dangling overhead. Cognac leather stools face symmetrical shelves stocked with a curated collection of 250 bottles of whiskey, bourbon and rye, and 50 mezcals. Marty secures hard-to-source spirits, like a 23-year-old Glenfiddich Grand Cru single-malt Scotch and 17-year-old Old Fitzgerald Bottled-in-Bond bourbon. Wine lovers can sip on Coravin pours from $100-plus bottles, including selections from Knights Bridge Winery and Pride Mountain Vineyards. “For being such a small space, we have a large amount of highly allocated spirits,” he says. If you fall in love with something, talk to the bartenders about buying a bottle to-go.

Marty also assembled a dream team behind the counter. Bar manager Angela Dunn has extensive knowledge of tequila, mezcal and rum; Nick Drohan, who also bartends at Chartreuse Craft Cocktail Lounge in Bonita Springs, worked in Nashville and knows his whiskey; Saint Martin-born Chris Wright is on top of the rum trends; and Matt Manziano specializes in bourbon, whiskey and rye. “Every member of my team brings something different,” Marty says, adding staffers often attend major industry events, like Tales of the Cocktail in New Orleans.

That cumulative knowledge helps inform the cocktail menu, which changes a few times a year to reflect the seasons and trends. The team makes syrups, like spicy ginger, sweet mango and nutty almond, from scratch, and sources local garnishes, like dehydrated apple slivers and edible flowers from Farmer Mike’s U Pick, whenever possible. On this season’s roster are the bourbon-based Gypsy Cowboy, with Cocchi Americano and Yellow Chartreuse, and the fruity Viking’s Cure, a blend of aquavit, gin, mango puree, lemon, cashew and Suze. Modern interpretations of classic cocktails, like the recent Aperol-and-gin-based Sidepiece, are strained into coupe glasses, while rum drinks are served in colorful tiki mugs.

On any given visit, the staff-created playlist starts soft and follows the feel of the evening. But there’s one thing that’s conspicuously missing: food. Though Marty has 33 years of experience in the restaurant industry, including as a partner at Joey D’s, Pelican Larry’s and Tavern On The Bay in Naples, he didn’t want to distract from the bar program. “I took the food aspect completely out of Sidebar because I wanted it to have a loungy, sexy vibe,” he says.