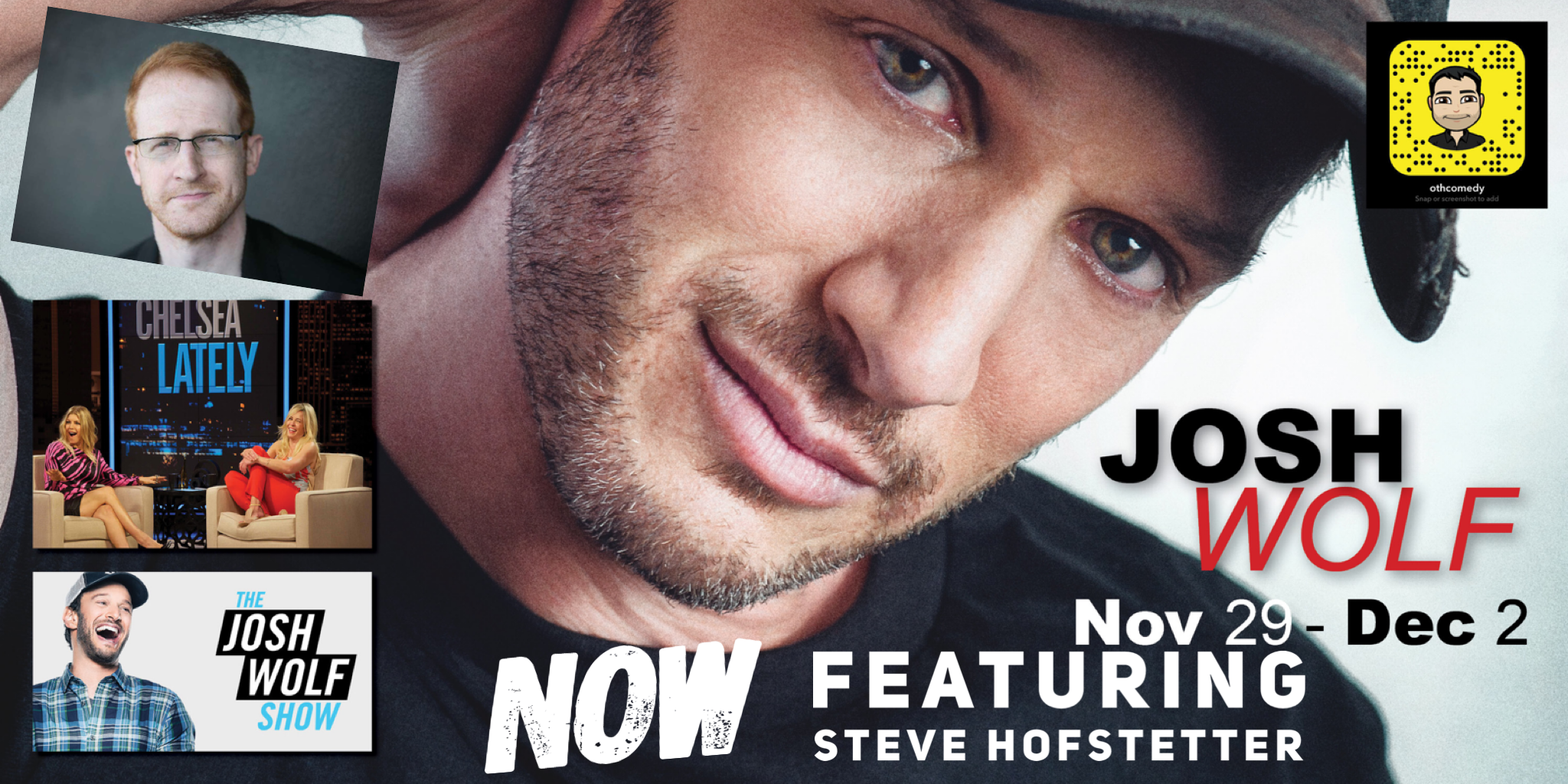 Comedian, actor, and writer Josh Wolf has become one of the most sought after personalities in comedy today. From hosting his own, late night comedy series, to becoming a New York Times Bestselling Author, and headlining stand up comedy tours across the nation, Wolf has proved time and time again he is one of the most d ynamic and multi-faceted comedians in the entertainment business.

In 2015, Wolf can be seen starring on and hosting CMT’s first original late night comedy series, “The Josh Wolf Show.” Set to premiere on June 11, “The Josh Wolf Show”will air nightly (Thursday through Sunday) and feature panel discussions, interviews and sketches with stars from the worlds of country, Hollywood, and beyond. “The Josh Wolf Show” is executive produced by Chelsea Handler, and by FREE 90 Media’s Brad Wollack and Tom B runelle.

Born in Boston, Massachusetts and raised in Amherst- Wolf had a love for comedy and making people laugh from an early age. As a teenager, he took to the stage in the Boston area, performing his first stand up show when he was 15 years old. By the time he was in his mid-twenties, he was ready for a fresh start, and moved to Seattle, Washington in hopes of expanding his comedy career. He was able to get more stage time and practice in the comedy world, as indie musicians were dominating Seattle’s live entertainment scene. In his twenties Wolf decided to make the move to Los Angeles. In 1999, Wolf got his first big break, performing a one man show at the HBO Workspace- which landed him a talent deal at 20th Century Fox, and a deal for his own television series with ABC. A deal with NBC soon followed. While testing the waters on the television front, Wolf began writing for TV, and quickly found it was another aspect of the entertainment business that he loved. He wrote on numerous sitcoms including “Yes, Dear,” Will Smith’s “All of Us,” and “Cuts,” starring Shannon Elizabeth. He soon decided h e wanted to dedicate all his time to writing, and stepped down from stand up, and appearing on camera.

In 2006 Wolf returned to television, appearing on the fourth season of NBC’s “Last Comic Standing.” This also marked his return to sitcoms, recurring on the hit series “My Name Is Earl” from 2006-09, and recurring and writing for “Raising Hope” in 2010-11. 2009 was also a banner year for Wolf, as he started making regular appearances on Chelsea Handler’s hit E! television series “Chelsea Lately,” and he toured nationwide with stand up comedy sensation Larry the Cable Guy. Wolf also found a way to tap into his passion for sports, and hosted two seasons of “The College Experiment,” a comedic weekly online college sports show for Fox Sports. In 2011 Wolf ended his touring with Larry the Cable Guy, and committed to appearing on “Chelsea Lately” once a week, while in conjunction writing for the show. He also became a New York Times Bestselling Author, for his c ontributions to Chelsea Handler’s bestselling book “Lies that Chelsea Hander Told Me.”

Throughout 2013-14, Wolf hosted “Shark After Dark” which aired during the ultra-popular “Shark Week” on The Discovery Channel and it consistently beat out all other late night talkers in the ratings. This led to Wolf being cast as the host of the Discovery late night series “Naked After Dark.” The show immediately followed airings of the network’s hit series “Naked and Afraid,” recapping each episode and featuring celebrity guests, and in s tudio stunts. He is also currently a recurring guest on ESPN’s “SportsNation.”

Wolf may be best known however, for his work as a round table guest and writer on E!’s “Chelsea Lately” and “After Lately” [2007-14]. In March 2013, Wolf debuted “It Takes Balls: Dating Single Moms and Other Confessions from an Unprepared Single Dad” [Grand Central Publishing.] Funny and brutally honest, the book detailed Wolf’s adventures as a struggling stand up comedian, while juggling being a single parent in Los A ngeles.

In addition to his work on television, Wolf continues to perform stand up comedy tours nationally and internationally. He currently lives in the Los Angeles area with his wife, Beth. In his down time he loves to hang out with his wife and kids, Trevor, Kaitlynn, and Jacob. He is also a massive sports fan - a topic he is always ready to chat about! On the charity front, Wolf has a passion for supporting the troops & actively participates with various organizations.