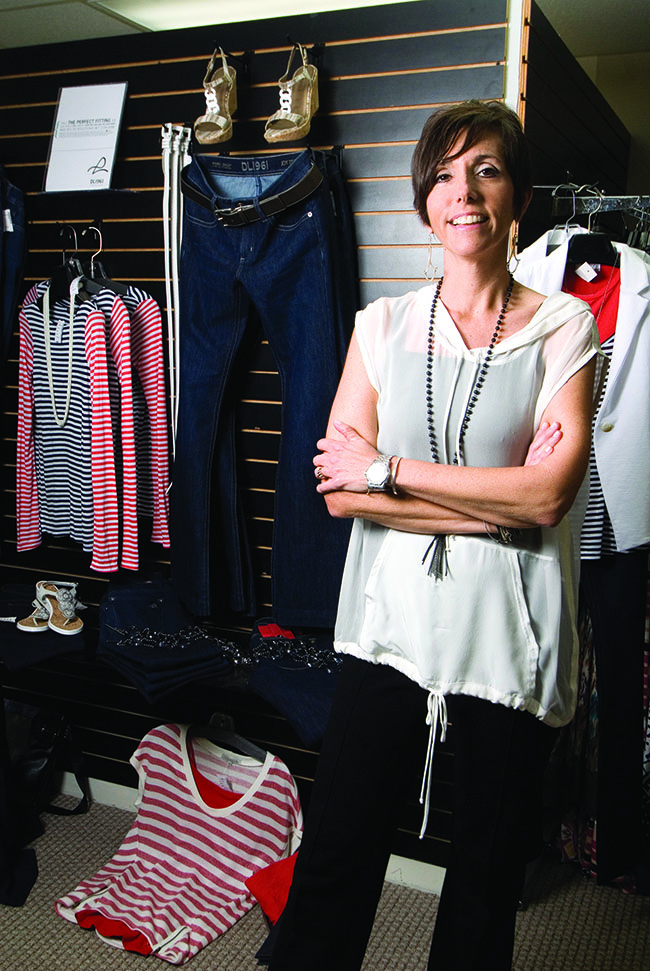 “Pretend these people are guests in your home.”

That’s what Jennifer Williams instructs her retail staff at her namesake boutique in south Fort Myers. And so, at the start of each day, coffee is brewed, a bottle of wine uncorked, spring water chilled and the beverages set out for customers who come to shop and socialize. Jennifer’s, says one client, is the shoppers’ equivalent of Cheers.

Perhaps that explains the shop’s uncanny longevity, tucked into the quaint Cypress Square on the corner of Cypress Lake Drive and McGregor Boulevard well away from regional shopping hubs, primary thoroughfares and strip malls anchored by big-box retailers.

Williams celebrates her 30th anniversary this year. Since she was 22 years old, she’s occupied the same corner unit, though she’s more than doubled her square footage.

“It’s hard to believe,” she muses. Williams never studied fashion. “You either have it or you don’t,” she says. But style seems to be in her genes. Her mother once told her about how as a young woman, working at a $12-a-week job, she purchased a must-have hat for $12. She put it on layaway.

Williams’ own style budded early. She remembers begging for a pixie cut for her eighth birthday, and by high school she was wearing a stylish asymmetric cut when everyone else still touted long locks. That’s not to say she didn’t ever follow the trends—remember the Dorothy Hamill look?—but she relishes the idea of people expressing themselves through clothing, accessories and hairstyles.

In fact, she encourages customers not to buy the kind of things they automatically gravitate toward.

“I’m much happier if someone buys something out of their box,” she says and demonstrates how that morning she had swapped out the plain white top a client selected for a textured black and white piece that added a new intricacy to the woman’s outfit. Williams knows her clients’ tastes intimately.

“I can tell you what people bought 20 years ago.” She laughs and admits she can’t always remember where she puts her keys or wallet, but she remembers who likes what, who bought what, who looks good in what.

That’s part of the shop’s charm. Williams wants to maintain a sense of service and individual attention in a day when discount superstores and national chains dominate the retail scene.

“There is so much less service— everywhere you go, you’re just a number,” Williams says. “I want people to always have a place to shop where their needs are met and they are treated well.” Sanibel resident Jean Halligan, 64, stopped by with friend Cathie Thiede, 69, one Friday morning on their way to Key West. Halligan describes her taste as “trendy” but “a little cautious.”

“I’m in my 60s, but my head still thinks I’m 25,” she says. She compliments the shop’s consultants for helping her cultivate a look that complements her youthful figure but doesn’t cross the line that tasteful older women know they ought not cross.

Here’s the unique thing about Jennifer’s: While Halligan and Thiede departed with their husbands for the Keys, Bonita Springs resident Jessica Must, 36, is up at the register making a purchase. The clothes at Jennifer’s appeal to multiple age groups. In fact, Williams has one longtime customer in her 90s who continues to shop there, her daughter and granddaughter in tow.

"I think I like the fact that it’s on trend but not overly trendy,” Must says.

To be sure, some of the pieces are eye-catching and distinct, but many are classic looks that will outlast the trend du jour.

But there’s still something about a hometown girl—Williams moved to Fort Myers when she was in middle school and graduated from Fort Myers High—running an independent business that appeals to people.

“As someone who grew up in Fort Myers and went to high school with Jennifer, I was always intrigued by her sense of style. She had a way of putting clothing together that just looked great, and I wanted to emulate that,” one former classmate wrote on Williams’ website.

Williams believes in giving back to the place she’s called home for most of her life. Long before things like “corporate social responsibility” and “community engagement” became business buzzwords, Williams was finding ways to help out civic groups.

Today, she donates part of her sales on the first Friday of every month to a nonprofit group.

“I feel like the community has been good to me, and I feel I’ve been blessed in so many ways in my life,” she says. “I feel it’s my moral obligation to give back.”

Occasionally she wonders about her long-term future—if young women will be hooked on the chain retailers who dominate the major roadways and the major shopping plazas.

“I do wonder if we’ll just age out,” she says of her clients, of herself.

But that time isn’t now. In fact, Jennifer’s is going through a major renovation. A wall separating the two sides of the shop has come down. The carpet is coming up. And the drop ceiling is going away for a new, open look.

She promised, though, it would still be “homey.”

The remodeling reflects Williams’ still-burgeoning enthusiasm for her business. She recalls a recent conversation with her 21-year-old son, who was questioning his career choice. Williams told him: “Love what you do.”

Because she does. And perhaps more than any other factor, that is what has sustained her for three decades.

“I love the customers. I love the merchandise. I love the clothing. I love putting people in clothing they never would have picked for themselves.”