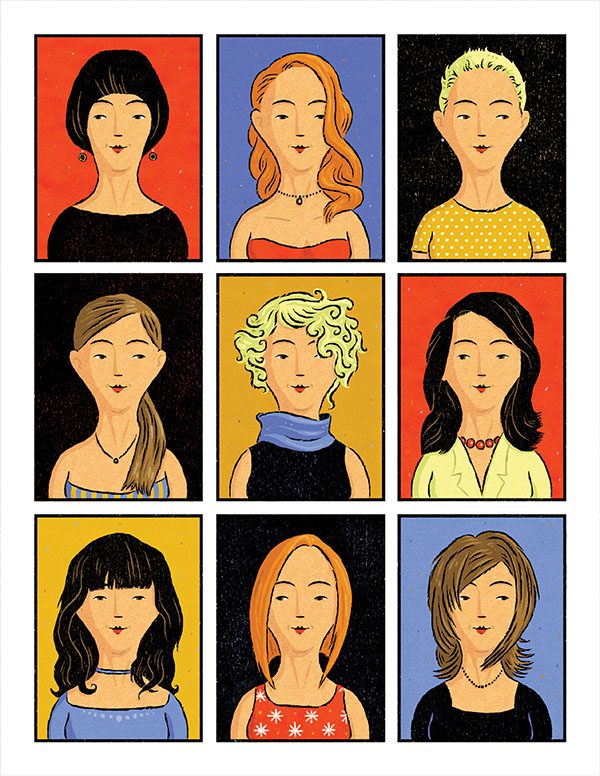 Let’s face it—we’re obsessed with our hair. Of all of the things we think about throughout the day, it ranks right up there with sex, food and losing weight. Is it sticking out funny? Is the gray showing through? Does this cut make my neck look fat? Lord, why can’t I get this cowlick to lie flat? (That last one is part of a country song we’re working on.)

But the truth is your hair is the one accessory you are stuck with each and every day. And it speaks volumes about you. It can tell others whetheryou’re all business, a little flirty, edgy, sensuous, fashion-forward or anchoring the nightly news—though more often than not it alerts people that you’re picking up the kids from soccer. (Shoulder-length bob, anyone?) Yet unlike the rest of the animal kingdom, we get to choose how our plumage represents us to the outside world: spiky, straight, asymmetrical, blond, red or blue, it’s your decision every time you walk into a salon.

But can that haircut actually change who you are? Can someone who’s been sporting a dull, mousy-brown mop on her head for a dozen years become a brand-new woman merely by asking for a (Posh) Beckham wedge? And by “new” we mean a stylish, fashion-forward humorless android. What about asking for a Zooey Deschanel? Will you suddenly begin playing acoustic versions of Buddy Holly tunes on a flea market ukulele?

The answer, of course, is yes. Whoever you are this very minute will be forever altered as soon as your stylist stands behind you with that mirror looking for your approval. Think of it as the follicle’s answer to intertextuality. In fact, this writer got a haircut recently that’s very reminiscent of 1983 Pierce Brosnan and ever since has been trying to solve crimes with the help of Stephanie Zimbalist. (OK, that might be a slight exaggeration, but only because Zimbalist is busy with her one-woman performance of The Lion in Winter over in Boca.)

“Definitely someone’s hairstyle can define them as far as their personality,” says Lisa Reynolds, a master cutter at Naples’ famed Robert of Philadelphia. “I always tell them, ‘Make sure that you’re ready. Make sure you’re really ready.’” (Sure, she was technically talking about people getting bangs. But aside from her repeated, “I still think your premise is flawed” remarks, she seemed on board.)

“A big cut really would change a personality,” says Pamela Stipes, a certified master stylist at Spada Salon & Day Spa in Fort Myers, saving the entire foundation of this story. “A good haircut will build someone’s confidence. If a person feels like they look good, they will stand more erect. They seem more professional. It really will change their psyche. If they just put their hair in a ponytail after they roll out of bed, it seems like their whole day will spiral down.”

Which seems to prove that hair really can change someone’s personality. Just not always for the better.

“A person better be ready if they’re going to cut all their hair off. If not, they could be totally destroyed,” adds Stipes, who’s been cutting hair since 1976.

“I really wouldn’t put that much weight on it,” says Goldye Meyer, a psychologist practicing in Bonita Springs and Fairfield, Conn. (It should be noted that Meyer has a beautiful head of hair.) “However, I do think there is an element that connects these things. The way that we go about trying to present ourselves is profoundly connected with our personality.

“Certain styles say things about the wearer, but we have to be very clear about what we think they’re saying and not to make a judgment based on that alone. But there are things we can generalize. If someone has taken the time to choose a hairstyle, then in some way they admired it.”

“A lot of people came in and asked for the Rachel and the Beckham (back in the day). But it’s not even so much that people wanted the haircut,” Stipes says. “A lot of times they just want to emulate the person. Back in the ’80s, it was Princess Diana. They liked her. They respected her. They wanted a piece of that.”

Arguably, if you are a fan of Gwyneth Paltrow, you may find yourself with a sleek blond ponytail, eating organic and listening to Coldplay. But just as having a specific style might allow passersby to make some amusing general assumptions, having an unkempt ’do from two decades ago might also speak loudly to someone’s current emotional state.

“When I first became aware of the importance of hair style, I noticed I could almost predict the mood of a patient or client I was seeing by their grooming,” Meyer says. “Mostly that was personified by their hair. If you’re used to hearing terms like ‘bad hair day’ or ‘good hair day,’ it’s a way of expressing how you feel.”

Meyer also says that when you see someone sporting a cut that was popular decades ago, it might be a signthat the person is “stuck” and doesn’t welcome or tolerate changes easily. There is something comforting about trying to maintain the same appearance that they have had for years. (Just go on Facebook and look up people you went to high school with. You’ll be amazed that some people have the exact same hairstyle.)

“I’ve seen men and women leading up to an important change—in hairstyle or color—that really has had an impact on their confidence and self-esteem,” Meyer says. “There is research on this: The first impression that we make in a new situation with new people comes from our appearance.”

Of course, that impression is in the eye of the beholder. Cosmopolitan magazine says each hairstyle represents the wearer’s lovemaking style. “While it seems like an innocent schoolyard ’do, ponytail wearers tend to be surprisingly bold between the sheets,” the editors write. Don’t even ask what they say about women who wear their hair in a bun.

“These are really more signals than anything else,” Meyers says. “But they are important signals to pay attention to because they direct you to some of these personality traits. They either energize people or keep them stuck. I have been very interested in working with people to let go of their ‘stuckness.’ No one needs to be stuck (emotionally). One of the biggest stucknesses is in the senior population. I’m very involved in this whole area of positive aging.”

You’re probably running to the mirror this very minute to gauge your level of stuckness.

“The truth is that if (someone) gets a dramatic change, then you may see that person change,” Meyer
says. “But it’s likely not because of the haircut, but rather they were ready for a change. It could be a statement of defiance, of independence, of having some type of autonomy that wasn’t so evident before. There could be an intrapersonal revolution going on.”

And what if someone has picked a style that can be worn different ways? Could they be suffering from multiple personality disorders?

“I would never say to a client, ‘Why don’t you just go and get a haircut?’” Meyer says. “I might be tempted to. But that would not be such great therapy. Sometimes a haircut is just an expression of empowerment.”

And sometimes it’s a cry for someone to rebroadcast Remington Steele.

After a dramatic hair change.

Few people experience the side effects of a new hairstyle quite like television news anchors. And ABC-7’s Courtney Robinson made
quite a splash last year when she cut off her long flowing locks for a more polished bob.

“I’m one of those people who does the long hair thing and then cuts it all off before starting again,” says Robinson, who has previously
donated her tresses to Locks of Love. “I’ve always really wanted to have this short cut—this exact cut. But the thing is that in television news, if you are out and about like I was in D.C. (Robinson joined ABC-7 from ABC’s WJLA in Washington, D.C.), the humidity makes your hair crazy. With long hair you can pull it back. So being here and in a climate-controlled environment, it was perfect timing.”

But before pulling the shears, Robinson talked over the cut with her boss. Since Katie Holmes had just rocked the same ‘do, she got the green light and hasn’t looked back.

“Ultimately, I feel like it is a confident, smart and fun/sassy cut and that’s how I feel most days,” Robinson says. “It’s definitely lighter and more professional.”

So what were the viewers’ reactions?

“I had steeled myself for people saying nasty things,” Robinson says. “People do have their opinions. But in fact, I only received positive reactions. Although, a few men have said, ‘Not my favorite, you need to let it grow out.’ … When you make this type of change as a single woman you think to yourself, ‘Is this going to ruin my chances of catching someone’s eye?’But it has been the opposite. Maybe this makes me more approachable.”

Liz Kellar has had so many hair colors, it's hard for her to remember which is her natural color. But she says it allows her to be who she wants to be.

We hear it all the time. In fact, it has become ingrained into our cultural lexicon: Blondes have more fun. But the truth is that any change in color can be pretty entertaining. And with so many to choose from, why stop at just one?

“I started coloring my hair in high school,” says Liz Kellar, an area freelance journalist. “I had a friend in cosmetology school who dyed my hair and ever since I’ve been tinkering.” That might be an understatement. She’s sported everything from black to pink to gray to red. “It was blond for a long time in my late 20s and early 30s,” adds Kellar, 37. “I would do blond with chunks of brown. But then I went straight bleach for a while—it was white.”

Not surprisingly, that really damaged her hair and she vowed to cut it all the way back to a pixie cut and let her natural color return. “I didn’t even know what that was,” she says. “But when I had my natural hair color I didn’t feel like me. I feel like when I have fake hair colors that feels more like me. I want it to be cartoonish. I don’t want it to be normal. … If you have a certain level of confidence I think you can do more than you think you should (color-wise).”

Of course, that level of commitment requires a great deal of upkeep, and Kellar is in the salon every two weeks to maintain her cut and color. Luckily her current eggplant ’do is feeling comfortable and she plans to keep it—for a while.