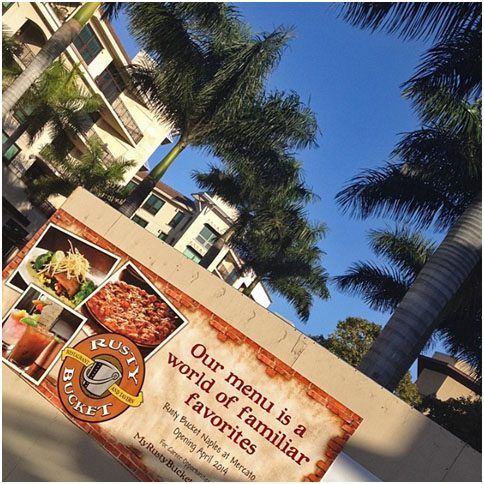 At first, Gary Callicoat probably wouldn’t strike you as a restaurant magnate on a roll. He’s very laid-back, friendly, seemingly in no hurry. But the longer he talks, the more his passion seeps out.

His Rusty Bucket Restaurant and Tavern, which he founded in 2002 and now has more than a dozen locations, has made its way to Mercato. “Finally, a grown-up place to bring the kids,” is its tagline.

Now, many of us never would have thought swanky Mercato would be home to a family-focused restaurant with a mascot called Pickle the pickle. But filling that gap may be just why it succeeds.

“Not to be arrogant, but I think that’s what the center is missing,” Callicoat says. “And if it’s good for them, it’s good for us.”

There may be TVs playing sports, and teams may settle in for a beer and a bite after a game of their own, but it’s not a sports bar, Callicoat says. You won’t see any shots being taken or be put off by obnoxious noise levels. Aside from welcoming children with open arms (they even have a program that earns kids a free meal with every five books they read, signed off by their parents on a bookmark), the restaurant promises to be very involved with community events and philanthropic efforts.

Menu items like a spinach con queso starter and Buffalo chicken sandwich might seem a little “TGI Fridays,” and some might argue that potstickers don’t belong on the same menu as chicken Parm. But Callicoat says the neighborhood concept is more culinary-driven than one might expect. The foods are familiar (think staples like wings, burgers and other sandwiches with added comfort foods such as meatloaf, ribs and roasted chicken), but the quality is elevated above bar food with an arsenal of 90 percent fresh ingredients. The menu includes substantial gluten-free (carefully prepared, Callicoat says) and kids’ choices (their grilled cheese looks straight out of a Kraft Singles commercial—delicious). Callicoat says their pizza will rival the best in town, citing daily-made dough and the more than 100 taste tests that took place before they settled on a pepperoni. A strong beverage program—all bartenders complete a five-month certification—includes Callicoat’s hand-picked bourbons, an extensive list of beers, infused Bloody Marys of varying spiciness, fun cocktails and daily specials.

With existing locations in Ohio, Michigan and Indiana, Rusty Bucket already has a built-in following in Southwest Florida. And Callicoat doesn’t like to enter a market without a minimum of five potential spots in mind, so Mercato’s location shouldn’t be the area’s last.

“We are aggressively pursuing Florida now, both east and west coast,” he says.

After several halts and push-backs, Rusty Bucket Restaurant and Tavern is scheduled to open May 8, between Bravo! Cucina Italiana and The Counter. myrustybucket.com