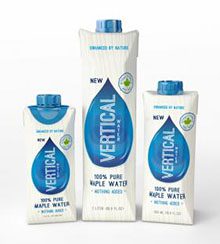 Have you been hesitant to jump on the coconut water movement? Well, if you're close to making the leap, might we suggest something even newer and cooler? Maple water. You might be familiar with its cousin, maple syrup, but they're not the same thing. Maple water is the stuff than comes straight from the tap (in the tree). Instead of being boiled down into your pancake accouterment, it's just bottled by companies such as Vertical Water or DRINKmaple. Why would you want this stuff? Because it's actually a low calorie drink that's loaded with electrolytes, vitamins and minerals. And, oddly enough, it's low in sugar—about half as much as coconut water. It's also got more manganese, calcium and iron. It's perfect for replenishing after a trip to the gym. verticalwater.com; drinkmaple.com