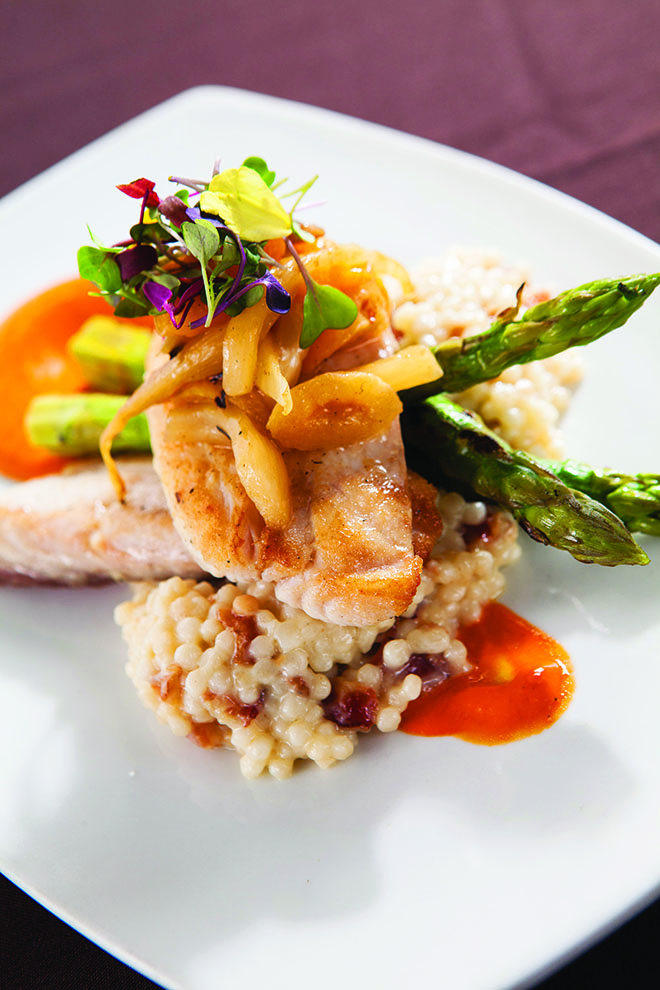 Fuse Global Cuisine is an ambitious restaurant. You get that sense right from the menu. It’s full of dense descriptions with buzz-worthy ingredients, often including appropriate provenance. (Example from the appetizer portion of the menu: Hudson Valley confit of duck, pan roasted and topped with seared grade “A” foie gras. Served with crispy brioche French toast, tart cherry marmalade and mascarpone dolce.)

If you look at Chef Greg Scarlatos’ menu for too long, you could be forgiven for calling it pretentious. One of my dinner guests says it’s food her chef father would call “fussy.”

I see it slightly differently. To me, the menu is documentation of a chef who wants you to know that this is his food. He alone has the requisite vision and skill to create these culinary masterpieces. Cooking, at its higher levels, is an ego-driven exercise. And Fuse is an expression of ego.

That would be disastrous, if it weren’t for the fact that it’s also really tasty. Some will find all the layers of description a titillating buildup to the dish. Others might consider it unnecessary foreplay. The tomato-avocado relish on side with the pan-seared scallops with mojo pork belly ($32) is really just chunky guacamole. But it’s damn fine guacamole that pairs really well with the black beans and plantains covered in melted goat cheese that accompany the proteins.

And so it goes with Fuse. Located in a pale pink building on U.S. 41 in Naples, the Fuse dining experience kicks off well, thanks to a spectacular beverage list. From better-than-most bottled beer choices to a short but good wine list to cocktail offerings that will rival anyone’s in town, Fuse starts off the meal right (if adult beverages are your thing). My party sampled several of the mixed drinks. The delightful Caribbean mule ($7) made with Barritt’s ginger beer was probably the least exciting, which speaks to the high quality of the rest. Of special note: the Green Flash—Hendrick’s gin, lime, sugar and cucumber. A martini with wallop of a cucumber and a bite of acid is a wonderful thing.

Without fail, Fuse’s dishes are full of flavor. In many regards, this is a wonderful counterbalance to the many bland plates I’ve been served locally in the past 10 years. The surprisingly light duck, Andouille and provolone “boules”($11)—deep-fried balls of smoky, fatty, cheesy wonderfulness—were balanced nicely by the acidity of the smoked tomato aioli painted on the plate.

But sometimes it became too much. “You have to love bleu cheese to love these,” my wife said of the crispy pork belly sliders with cherry-cabbage slaw and Maytag bleu cheese ($12). You also had to wish that the pork belly were as crispy as advertised, because the dish was crying out for some textural differences. It ended up being a bit overpowering and too soft.

And by the time you got through an appetizer—we also sampled the restaurant’s signature hog wings, braised pork foreshanks with a chili-tamarind glaze ($11)—and were into your entree, your palate was tired.

It seems silly to complain about too much flavor, but it really was the case with the Thai short ribs ($32) and shrimp and crawfish etouffee ($27). Both were delicious, but occasionally too strong.

Perhaps that’s just a ploy to get you to save room for dessert. Yet, that was where the chef’s desire to play with flavors finally got the best of him. While the avocado cheesecake ($7) sounds like just the sort of delightful twist of savory and sweet that will sing on the plate, it really didn’t. Part of the problem was the cheesecake was too loose, with the texture too close to something you’d make from a box. And the avocado wasn’t well incorporated, with big flecks of white cheesecake popping up in each spoonful. But regardless, the flavor was just off.

Thankfully, the guava bread pudding ($8)—dense and sweet with bright cubes of diced guava—saved the end of the meal.

In the end, Scarlatos’ vision is mostly successful. Even when it fails, his food fails upward by trying too hard rather than lacking imagination. With a little more time, Fuse has the potential to be one of the better restaurants in Naples. As it is now, it’s certainly worth making a reservation.

Open for dinner Monday through Saturday beginning at 5 p.m.