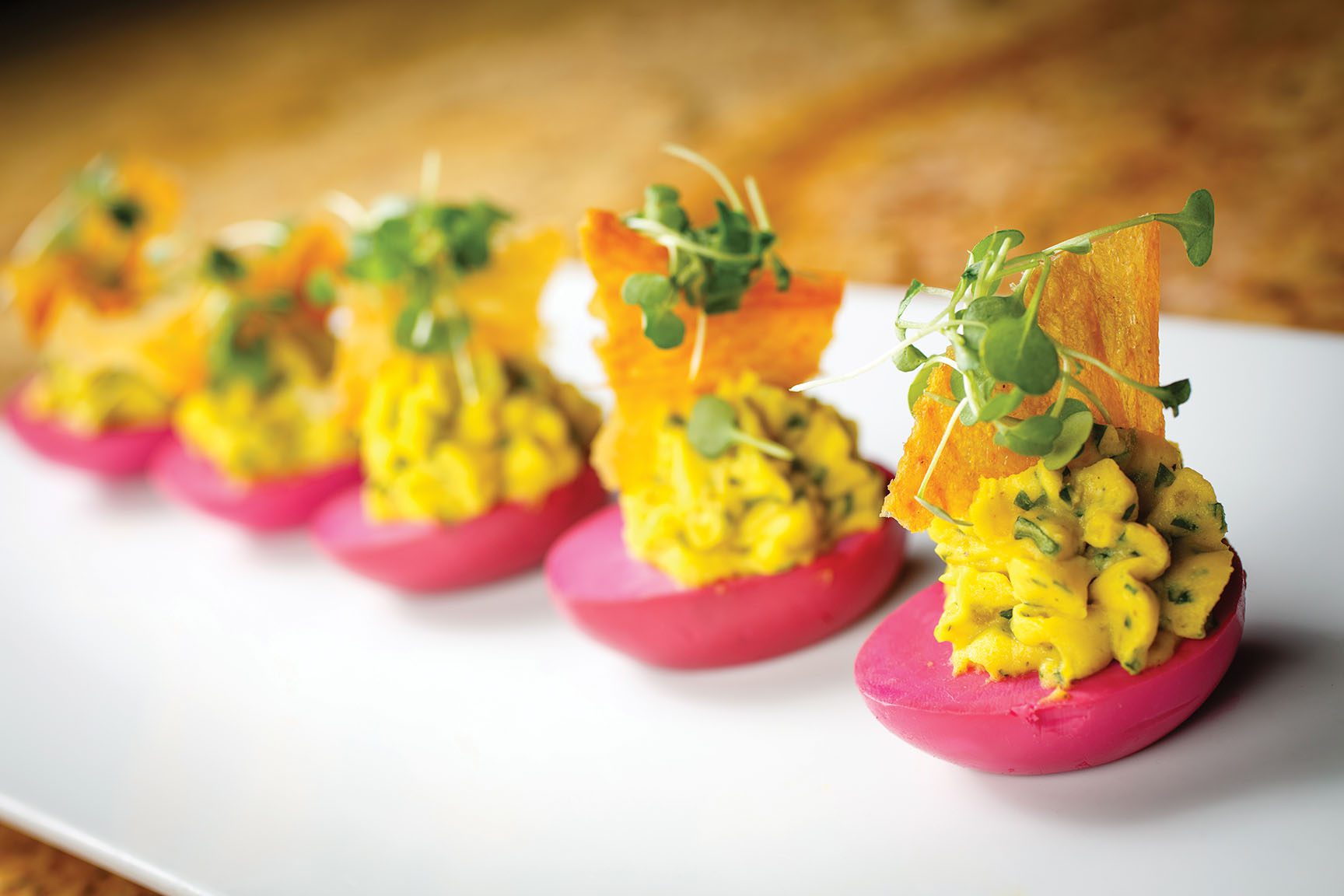 Update (December 2015): The original article below has been edited to reflect changes to what was originally published in the magazine. All businesses in the “Still to Come: Fall” category have either opened or are opening in a matter of days. Saltwater Blues was removed from below after the owners announced its unexpected closing.

What’s old is new again—or in this case better than ever.

Fourteen years ago, Harold’s on Bay, with crazy-delicious creations like blue crab-
banana spring rolls, became an “it” spot in Fort Myers. But when the city bulldozed streets in 2008 to make the River District, chef Harold Balink moved his magic to the Bell Tower Shops, becoming a partner at Cru. It was a role he wore well, garnering attention and praise and developing a cult following. So it was no small surprise this summer when he sold his share to reinvent a classic.

The restaurant opened in early October right after Balink and a team of four other local chefs returned from cooking at New York’s James Beard House. Combining Balink’s trademark penchant for the unusual and his strong relationship with Rosy Tomorrows Heritage Farm, his new Harold’s is bound to make a big splash this season. “We’ll be the first sit-down, farm-to-table restaurant in Fort Myers. In the dirt yesterday, tomorrow on your plate,” he says.

An early draft of the menu shows Rosy Tomorrows’ antibiotic- and steroid-free chicken with chanterelles and house-made linguini; Matlacha clams dotting a sweet potato-curry bisque; and braised fennel and saffron alongside local lionfish (an invasive species the Florida Fish and Wildlife Conservation Commission is hoping people will start consuming by the forkful).

“It’s not going to be your average everyday menu. It’s going to be as eclectic and creative as I can push it,” says Balink. “There’s pretty much nothing that I haven’t cooked in my career. I enjoy trying new things and figuring out how to uniquely prepare them so people will try and like them.”

The scant 38-seat restaurant occupies the former Blue Windows space on U.S. 41. He’s made the bar a bit smaller and adjusted the aesthetics, sound and lighting in the intimate dining room. You can tell he’s having fun with it.

There’s a new place in town for bon vivants—and it’s nothing like anyone, anywhere (even in big cities) has seen.

Paradise Wine is an adult-beverage Eden, a hybrid gargantuan retail outpost and entertainment hub at the Pavilion in North Naples. The supernatural is surely in the details, at least through the vision of co-owners Leigh Benoliel and Blaine East.

Picture the convenience of a nearly 11,000-square-foot big-box store yet the charm and service of a haute mom-and-pop wine shop. A concierge greets guests as they enter, and an accredited sommelier will always be on the floor to guide people through the impressive inventory (3,000 bottles of wine from $7.95 to $6,000-plus; 1,200 spirits; and 8,000 beers, some beach-ready in a 38-foot-long cooler). Now take stock of the two bars: a wine-centric one with tasting flights and 20 by-the-glass options and a 30-seater near the entrance adding in a full cocktail list, 14 taps and an indoor-outdoor setup spilling onto a South Beach-style 3,000-square-foot patio (the lounge will debut later than the Sept. 28 opening). Live music is also scheduled for weekend evenings.

“We’re pouring our hearts into this, and we think it’s going to be a cool place for everyone to go,” Benoliel says.

The pair relocated from North Carolina after East’s 30-plus-year career in shopping center development because they knew Naples was the perfect fit. “We think it’s the American Riviera,” Benoliel says. “We want to cater to locals. The means to that end is to have events all the time.”

One they’re definitely seeing through is a full moon steel-drum party, a tradition they fell in love with while sailing the British Virgin Islands. Crave Culinaire will also be the in-house caterer for the private event space—and chef Brian Roland developed the bar-bite menu served daily (think: crispy fried chickpeas with preserved lemon and mojo-marinated grilled shrimp skewers). The cherry on top? An in-house director of wine education will hold classes every week.

Before Paradise Wine had flooring, Benoliel and East were making inroads in the community. From pouring wine at charity events to scheduling hard-hat tours with local leaders, they’ve worked tirelessly to add another jewel to the crown of their new hometown.

Candy Grandy, Coastland Center Mall, 1790 Ninth St. N., Naples, 262-2621, candygrandy.com. From the owners of Le Lafayette: a serious sweet shop with custom chocolates and nostalgic confections from around the world.

Row by Capt. Brien & Crew, 2500 Vanderbilt Beach Road, Naples, 389-6901, rowseafood.com. Seafood and a raw bar with a focus on New England dishes; also home to Off The Hook Comedy Club.

The Standard, 1520 Broadway, Fort Myers, 219-6463, thestandardftmyers.com. Comfort food and craft cocktails with an edge for breakfast, lunch and dinner in the River District.

Coastal Peruvian Seafood & Grill, 5447 Airport-Pulling Road, Naples, 825-8616, coastalperuvian.com. In a plaza off Pine Ridge, this restaurant will focus on favorites like ceviche and octopus a la plancha.

Taste of Naples Tours, 250-9040, tasteofnaplestours.com. Chauffeured tours with stops at high-end restaurants for food and wine.

Zen Asian BBQ, 10823 Tamiami Trail N., Naples, 250-3985, eatatzen.com. Rustic yet sophisticated flavors of Japan, China and Thailand, plus Korean barbecue, from a master sushi chef; the restaurant will also have a pastry chef.

Palm City Brewing, Fort Myers, palmcitybrewing.com. A fixture at local festivals, it’s about to get a permanent home near Alico Road.

The Crust, 8004 Trail Blvd., Naples, 244-8488, thecrustpizza.net. The popular pizzeria with thin-crust pies is relocating to and renovating the former Big Al’s space, tripling its current size.

Mama Mia’s Pizza, 720 Ninth St. N., Naples, 262-2823, bestpizzainnaples.com. Offering Boston-style pies for the past 40 years, the only thing that’s changed is its address.

Whiskey Park Tavern, 3380 Mercantile Ave., 566-3200. It had many local fans as Grumpy’s Ale House in the Pavilion; now with a new name and location, it plans to add American food with a Cajun twist.

Bleu Provence (261-8239, bleuprovencenaples.com) earned Wine Spectator’s Grand Award for the first time, joining only 80 other restaurants worldwide; Shula’s Steak House (430-4999, shulasnaples.com) was also bumped up to the next-highest level of recognition with local repeat honorees Angelina’s, Baleen, The Capital Grille, Sale e Pepe and Sea Salt … Crave Culinaire (292-1529, craveculinaire.com) is expanding its reach in 2016 with Crave2Go, a casual delivery and catering company, and CraveFit, a healthy meal delivery service. And stay tuned for Venue by Chef Brian Roland, a multi-use event space for 250 people … DeRomo’s (325-3583, deromos.com) opened a gift basket store and will unveil an event space on the second floor of the Promenade at Bonita Bay … Freedom Fine Cigars & Lounge (207-9070, freedomfinecigars.com) is now serving local draft beers plus wines, including port and sherry … Norman Love Confections (866-515-2121, normanloveconfections.com) expanded its core line of signature chocolates, adding 11 flavors … The Ritz-Carlton, Naples (598-3300, ritz-carlton.com/naples) launched the Grow House, a futuristic hydroponic farm on property with a one-acre capacity to supply its restaurants with freshly harvested produce … Sea Salt (434-7258, seasaltnaples.com) built a lounge near the bar and is now the only area restaurant to serve Tambaqui fish ribs from the Amazon—try them and you’ll be in awe.