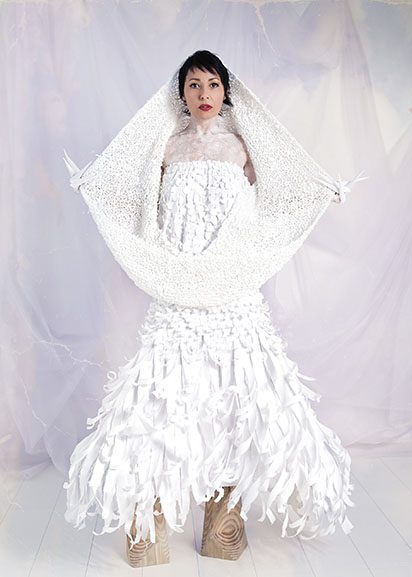 Imagine: you live on the Salento Peninsula, the stiletto heel of Italy’s boot in the province of Lecce, “The Florence of the South,” where stone palaces date to the Middle Ages. Off the coast of this geographic gala of limestone cliffs, saltwater lagoons and golden sand, the Adriatic and Ionian seas merge. Inland are ancient olive groves and fertile farmland loved, conquered or both by Greeks, Romans, Byzantines, Normans and Spaniards, all of whom left sustaining gifts of architecture, art, foodways and language.

You are a woman with a husband and son and extended family in this region of Puglia, about which travel writers swoon.

And if you are Mariapia Malerba, you must leave. You must go to the United States, where your brother lives. This is because you are no longer in the inner circle of the avant-garde because you are not young enough. “In Italy, the age was a big deal,” Malerba says. “You cannot participate in an art show after age 34.”

In the five or so years since she arrived in Southwest Florida, Malerba has become a force on the local art scene, a versatile and visionary talent and an encouraging, generous peer. She is accomplished in theatrical set design, fashion, painting, sculpture and art forms that defy labeling—such as paint placed between two layers of clear plastic, then pressed from the top layer and squeezed into hauntingly beautiful figures surrounded by small red shapes reminiscent of hearts.

Malerba was born in Switzerland and moved with her family to southern Italy when she was 8. She acknowledges a nearly idyllic childhood at Salento. Her mother was a “housewife,” her father a gasoline distributor. “I was 13 and owned this little Vespa,” she says. I was going to the beach always with my friends, and I was so free. From 8 a.m. to 8 p.m. every day in summer, off with just a sandwich. I was a little mermaid in the water. Not preoccupied with anything, with making a living.” She pauses. Then her wide, white smile envelops you like an embrace.

But economic reality happens. Malerba—whose compound first name means “drop of the sea” (Maria)  and “devout” (Pia)—graduated from art school, moved near Milan for a decade, then back to Salento, changing collaborators and locations when it was time to learn more, “when I thought my story was done,” she says. “I was a pretty crazy wild horse when I was younger.”

Then in about 2008, Italy joined the rest of the world in recession. Even in the culture capital of the world, art is not necessary for survival. Work became harder to find.

But Malerba’s early success working for such designers as Versace, Dolce & Gabbana and Moschino allowed her to bank the two years’ worth of living expenses and the high cost of a work permit required to emigrate to the United States legally. “When you come here legally it is so hard,” she says over a glass of pinot grigio on a recent evening at Cru in the Bell Tower Shops.

She had finished the workday at Chico’s, where she is a senior designer for White House/Black Market. Weekdays belong to her employer; weekends are hers. The stable income is critical, she says, because of her son.

It is a far cry from 2009. New in this country, her marriage fell apart. Her husband moved back to Italy. For income, she painted signs. For clients, she looked for bare shop windows and convinced proprietors they needed her work. She spoke no English.

It’s then that you fully comprehend the survival instinct and drive to create that exist in this 4-foot-11, 100-pound package.

Today she shares a renovated 1975 house, barely out of the shadow of Cape Coral’s Midpoint Bridge, with second husband Anthony Gartner and her son, Giulio, 14.

A visit to her uncluttered, art-filled home feels like shopping trip in a favorite store. A few steps, then halt to admire the painting of an old woman with water falling from the bowl she’s made of her hands. A few more steps and bright red poppies on textile demand attention. Browsing takes you to a piece she created for an animal advocacy fundraiser, a martini glass with flame made of resin swirling up and holding a baseball, to commemorate Roger Clemens, “The Rocket.” In another, chocolate splashes up from a glass containing a strawberry in a piece named for Norman Love. You imagine your new art wardrobe culled from this home full of painted fabric, canvases, glass sculpture, more.

On this sunny Sunday afternoon in November, Malerba leads you to a white staircase cocooned with white walls, up to a large, airy room with a white wood floor that serves as a studio, dining room and gallery. Its purposes are perfectly synchronized: fine dining on a sleek table in a gallery.

The room is spare. She explains: “I have to work in a clear space. There the energy flows. In life we carry a lot in our minds, between work, family, what our society wants from us. When I come home I have to find a peaceful, empty space where I can rejuvenate my thoughts, find solutions.”

Sliding doors open to a deck Gartner built. It overlooks the backyard, where Giulio and a friend take turns gliding back and forth on a U-shaped skateboard ramp Gartner also built. Malerba’s husband is a landscaper with an artist’s mentality; he had been a graffiti artist in Chicago before moving south in the ’90s. They met at work in 2010, while he was art director for a company that designs dresses for ballroom dance competition. She was a designer. He applied Swarovski crystals to gowns made of her painted textiles.

He recalls their meeting. “I was transitioning into airbrush, and painting. Mariapia came along, popped through the door and looked at me and what I was painting like, ‘What are you doing?’” They both laugh at the memory. Gartner continues. “At this point she didn’t speak any English, and I didn’t speak any Italian, but she picked up a brush and somehow conveyed, ‘Can I do something with this painting?’ And from the minute she started and I saw what she was doing I just backed off.

“After that, thanks to Google Translate, we were able to communicate. And then she sacrificed herself and married me.” They laugh again.

Art is a way of life

In the kitchen occupying a corner of the white room, Malerba retrieves refrigerated coffee brewed that morning, zaps two cups in the microwave and sits at the table. Painted directly on a side wall are two beautiful blue eyes; an ear will go near the receiver now playing early jazz, she says, a mouth somewhere in the kitchen.

You wish to be in two places at once: One is right here, listening to her sophisticated ideas about creativity spoken in sweetly malaprop English. While you discuss empathy and love as creative advantages, she says artists feel too much, really: “I’m so sensible … it’s a double-knife kind of situation.” You feel pulled to the room’s far corner, where you want to examine a white, armless mannequin with the head of a horse, wearing a hoop skirt made of so many black mesh back rests and covered with a swarm of paper butterflies. You wish you could be sitting and engaged in this great conversation but also standing before a slice of wood as tall as a person, depicting an angel watching over a mother and son that you instinctively know by now is Malerba and Giulio. This she confirms. “I was in a family moment. My son was 3 or 4. That’s what I had to do. That was in my head.”

The hoop skirt was in a 2013 fashion show of Malerba’s gowns made of recycled materials that included tissue paper, catalog covers and ostrich feathers. She brought more to a 2014 show in Naples, where photographer Mila Bridger was stunned by Malerba the artist as well as Malerba the person.

“I knew about her, knew her collection,” Bridger says now, as if still starstruck. “Then I saw her at LiveArts!, I think it was. And I was thinking she is not even going to talk to us, she’s so amazing. And then we started talking! And I went to her (later) show at the botanical garden and sent her some photos I took.”

The women now are friends, collaborating on a series of creative portraits featuring Malerba’s dress collection.

“Whatever she does now, she just blows everybody’s mind,” Bridger says. “Her work is just amazing. … To the power of 10,000 amazing.”

That last word comes up a lot.

“I love Mariapia! She’s amazing,” says diorama artist Stephen Hayford. “We met when I was looking to get photographs printed on canvas for an exhibit. … She casually mentioned she was a painter. I asked to see some of her work and was blown away by her talent. We talked art for more than an hour. Her personality is so vibrant that she sent me home totally jazzed to create. She’s so grounded, so humble and so generous with praise and feedback. I remember after meeting her I excitedly called my wife and told her all about Mariapia and that she had to meet her. They hit it off immediately.”

The families quickly realized they lived very near one another and their sons went to the same school.  “Our friendship really took off then,” says Hayford, now at work on images for Star Wars: The Force Awakens and LEGO.

“She speaks a universal language, from abstract to realism,” says artist Marcus Jansen. “Her (artistic) vocabulary is large. All of her cultural influences come out in her work. She’s a very close friend and a true artistic bright light. She’s extremely talented from a creative standpoint. I’m a huge fan.”

Jansen spent his early years living in Germany and came to Southwest Florida as an adult. His shows again take him all over Europe. He understands why Malerba would leave such a historic and beautiful place for the United States. “For commercial opportunities, this is the place to be,” he says. “And in the end, commercial success is what moves an artist forward.”

Malerba has more shows on the horizon and plenty of opportunities to collaborate, learn, experiment and talk art.

She’s not in Italy anymore. She’s in Southwest Florida, and there’s no place like home.