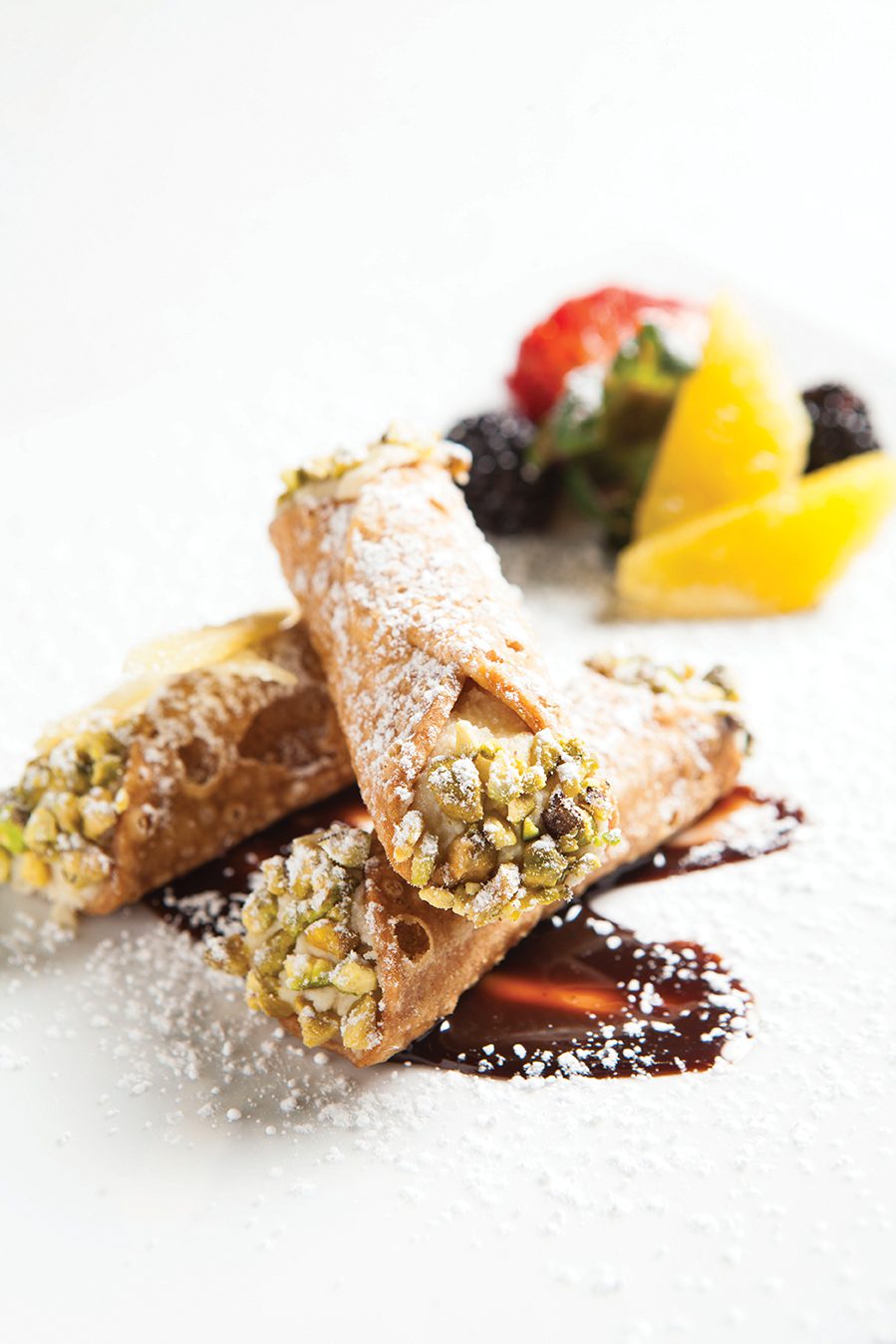 From the moment I stepped into Teatro, the elegant Italian-inspired restaurant connected to the Southwest Florida Performing Arts Center in Bonita Springs, it was impossible not to notice the star power behind the establishment. Chef Michael Psilakis, who owns five restaurants in the New York City area and has received a Michelin star, is everywhere here. His poster board-sized headshot sits by the front door, his red-ink signature is on every menu, and his bio is listed before the appetizers. He brings a certain celebrity status to the dining experience, and his expertise is undeniably present in the flavor and boldness of his dishes.

Our appetizers included a plate of grilled octopus served over chickpeas ($14) and a bowl of Prince Edward Island mussels ($14) that my friend called “maybe the best mussels I’ve ever eaten.” The octopus was tender and lightly flavored from the grill, while the chickpeas were dressed with olive oil, yogurt, lemon and a black olive puree. The rich tomato broth that soaked the mussels was punctuated with sliced garlic, sautéed onions and fresh dill, perfect for sopping with grilled bread.

Our main courses, too, had a particular flair, with an inventiveness and presentation that spoke of the chef’s talent. My companion ordered the sushi tuna glazed with agridolce ($28), a traditional Italian sauce made of both sour and sweet components. Initially the combination seemed odd, especially because I associate sushi-style tuna with saltiness and umami from Asian cuisine. But the agridolce paired well with the seared tuna, and the eggplant caponata that accompanied it enhanced the dish’s Italian flavors.

When my chicken piccata ($19) arrived (left), it had such an unexpected look that I thought for a moment our waitress had brought me the wrong plate. The chicken was cut into strips and fried. The pieces were served with whole marinated artichokes over house-made linguine. Though the appearance was surprising, the classic piccata flavors were all there—lemon, butter, capers—and the original take proved to be outstanding.

The restaurant’s interior is sleek and cool with high ceilings, a mostly white color scheme and round white globes hanging overhead. The space feels both modern and urban, the sort of venue you might come across in a larger city. It’s lovely, and it was unfortunate we were the only diners from our 7:30 p.m. weeknight reservation until the restaurant closed—I hope that was just a hiccup.

Teatro’s wine list touts a solid sampling of varietals, and the cocktail list is fun with updated twists on classics like the Moscow mule. I enjoyed my Victorian ($14), a blend of champagne, peach liquor and house-made vanilla syrup.

For our dessert course, we split a plate of three miniature cannolis ($9) filled with whipped ricotta and sprinkled with pistachios, as well as an ice cream cookie sandwich ($10). From the earlier dishes, I had come to expect a certain panache that the cannolis lacked. The sandwich, on the other hand, was constructed of a chocolate-covered wafer, chocolate gelato, hazelnuts and sea salt, and it arrived on a cutting board with a knife sticking out of it.

“This is a serious dessert right here,” my friend said.

Teatro makes for a dramatically good dining experience. It’s the perfect place to eat before a show, but it’s also worth a visit even if you don’t have tickets.