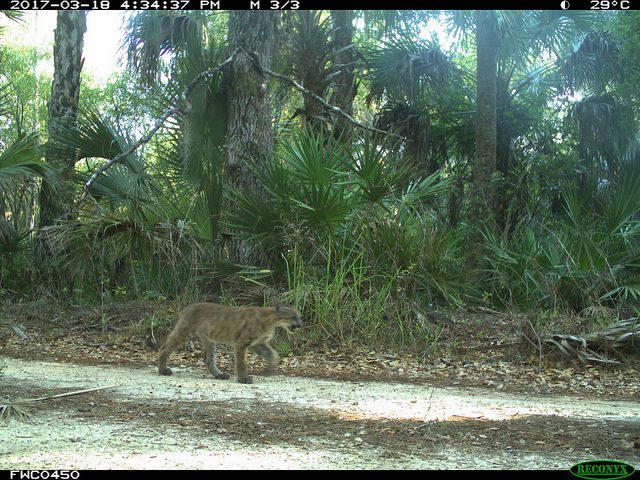 A couple of months ago, state wildlife officials confirmed the first sightings of a female Florida panther north of the Caloosahatchee in 40 years. In conservation circles, this was huge: Males had long been known to roam northward, but their potential mates did not, limiting the species’ range and long-term viability.

Monday, the Florida Fish & Wildlife Conservation Commission announced even bigger news: That same female panther is presumed to be the mama of at least two panther kittens, the first babies documented north of the river since 1973.

To put this in perspective, we caught up with conservation photographer Carlton Ward Jr., who incidentally spent this past Friday at Corkscrew Swamp Sanctuary meeting with conservationists, private land owners and others about the importance of preserving contiguous land for the wide-roaming panther and other imperiled wildlife. Ward is a founder of the Florida Wildlife Corridor, a 15.8-million-acre swath running through the heart of Florida.

“These panther kittens at north of the river are a great sign of hope for the recovery of the species and also a big call to action,” Ward said following the announcement. “Not enough land that is available to them is protected. Right now, there is a large enough connected landscape for panthers to recover throughout the state of Florida once make it over the barrier (the Caloosahatchee), but half of those lands are working farms or ranches.”

That puts the land at risk of development as generational ranching and farming families transition out of the business. Currently, 9.5 million acres of the corridor are protected.

That’s what brought Ward to Naples last week—to continue a dialogue among conservationists, policymakers and private landowners about how to achieve the dual interests of conserving land and protecting financial interests.

“There are more cattle ranchers and farmers interested in conservation than there is funding to realize those opportunities,” said Ward, who comes from a ranching family. “This is a unique moment in time. That landowner interest will not be there forever.”

Florida could grow by as many as 15 million new residents and lose 5 million acres worth of rural and agricultural land by 2070, according to the recently updated Florida 2070 report by the University of Florida, state Department of Agriculture and Consumer Services and the 1,000 Friends of Florida. State land acquisition is only one tool; Ward hopes to see more initiatives such as conservation easements in which the state essentially compensates landowners to keep the land wild.

At Corkscrew Swamp, panther sightings are up, though Director Jason Lauritsen cautioned against interpreting that as a sign of recovery. Rather, he said, it’s because the once-dominant male panther is absent from the region, and other males are vying for the turf. A male panther needs about 200 square miles worth of territory. “It’s a wonderful thing to have a female panther up there and possibly spread the population,” Lauritsen said.

Both men hope Floridians see the panther as a symbol, representing the fragility of wildlife and the need for conservation. Ward, the recipient of a National Geographic expedition grant, is working at the Florida Panther National Wildlife Refuge to photograph the panther; he’s hoping to produce a magazine article and documentary spotlighting the endangered species.