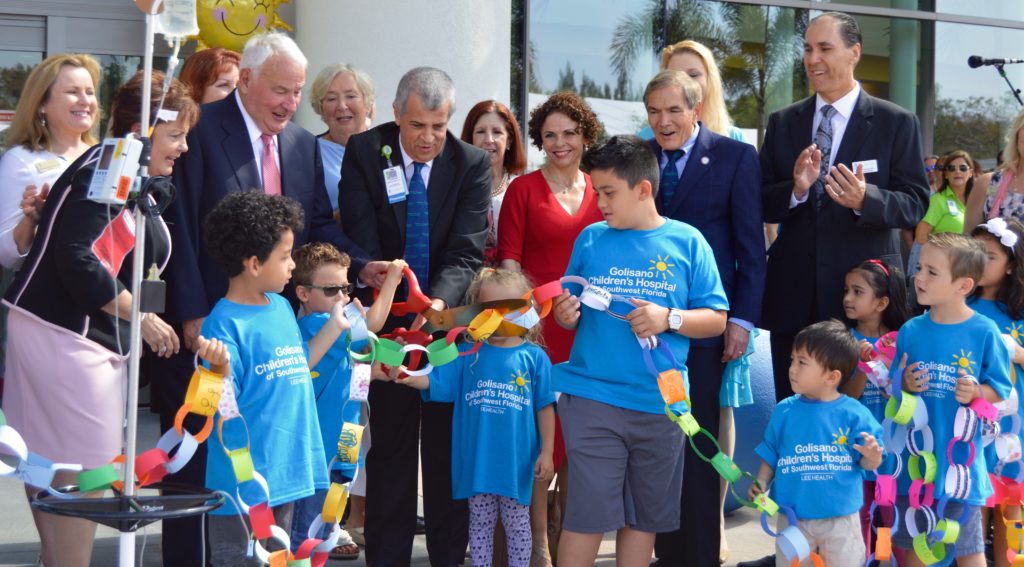 “It is the greatest gift we can give our children.”

The public remarks had just ended, the ceremonial ribbon (a hand-crafted paper chain) had just been cut, and Dr. Emad Salman stood on the first floor of the new Golisano Children’s Hospital of Southwest Florida and thought about what had just transpired.

“I think it is a hospital built with love,” said Salman, a hematologist/oncologist and the hospital’s medical director.

Some 14,000 individuals—including school children—donated to the construction of the $100 million project, which officially opened Saturday morning in a celebration that drew thousands of families, employees, civic leaders and curious residents. Jim Nathan, CEO of parent company Lee Health, noted wryly that the system’s board of directors bypassed consulting firms and financial feasibility studies and went on gut instinct—that Southwest Florida residents would pull through and make it happen.

“Many people were skeptical about building a children’s hospital; some thought it was impossible,” Nathan reflected. “Thankfully, there were others who knew we had to try because of our community’s rapid growth and most importantly because of significant emerging life-changing and lifestyle and lifesaving changes in care delivery for children—new technology and skilled pediatric talent. All these changes have resulted in more children to be cared for, and more care needed to be provided as close to home as possible.”

In 2012, philanthropist and part-time Naples resident Tom Golisano pushed would-be donors to open their wallets by issuing a $20 million challenge grant. A little more than a year later, the community had matched it. Organizations such as SWFL Children’s Charities, the organization behind the Southwest Florida Wine & Food Fest, and Barbara’s Friends, a foundation run by a couple in their daughter’s memory, kept up a steady flow of funds.

“There is nothing more emotional than a father or a mother who know that their child is having difficulty physically and need help,” Golisano said. “That is the essence. That is the most important thing. To know that I’m involved in it … it’s just so important, and (if) I have the ability to do it and to help, why shouldn’t I?”

The hospital’s initial opening in 1994 represented a giant leap for pediatric medical services in Southwest Florida. Previously, critically sick children had to go to Tampa and Miami for advanced care. In the two decades since, Lee Health has added specialists and technology as population growth and medical advances dictated. But the existing children’s hospital is actually a hospital-within-a-hospital, located within HealthPark Medical Center. It met the needs of kids and families, but its staff had long known that it could do much more in a kids-only facility.

And that’s what the new hospital is.

The decor is light and bright and decidedly non-threatening. Hundreds of meetings yielded the 300,000-square-foot design and its accouterments. Those include everything from a laundry room, kitchenettes and lounges for families facing long-term illnesses; to playrooms for children; to in-room storage for staff to maximize hands-on time and minimize inefficiencies.

And while the place is designed for emotional well-being (lots of picture windows, cheerful colors and playful photos), it also acknowledges emotional hardships. One room of the hematology/oncology floor doubles as a hospice suite. It was installed because many families don’t want to leave the familiarity of the doctors, nurses and other staff who have seen them through their devastating losses, Salman explained.

Outside, 5-year-old twins Leo and Lola Grabinski romped through a play area. They’d been born prematurely, weighing less than 2 pounds each. Their father, Matt, credited the neonatology staff with saving the babies’ lives. He was among the speakers at the grand opening ceremony.

“Typically when I travel, no matter how nice the destination or fancy the accommodations, I usually miss home within a day or two,” he told the crowd, quoting from an email he’d sent to friends and family during the twins’ ordeal. “Laura and I haven’t missed our house since we checked out of the hospital and moved into the Ronald McDonald House. If home is where the heart is, then our new home is NICU C, third floor HealthPark.”

Staff will spend the next month preparing to move patients, practicing with new technology, familiarizing themselves with the building, finalizing protocol and emergency plans, and combing the place for anything that could create a glitch in patient care.

In early May, a dream decades in the making will fully spring to life.

“It’s a place where children can thrive and where miracles can and will happen,” Nathan said.