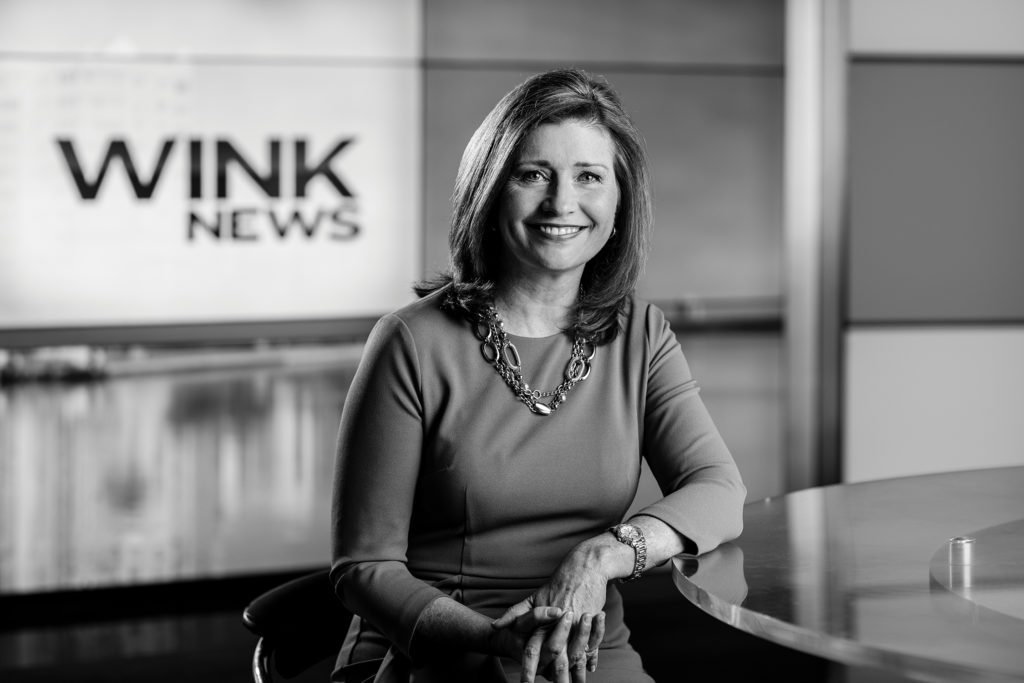 Journalism is in turbulent times. The phrases “enemy of the people” and “fake news” have become common political rhetoric. A shooting at the Capital Gazette newspaper in Maryland killed five people—and threats continue against major news outlets such as CNN. Surrounding this is an economic downtown in the industry; the number of newsroom employees is down about 25 percent over the last decade, according to the Pew Research Center.

WINK anchor Lois Thome is one of the most experienced journalists in Southwest Florida. The Wisconsin native has worked at WINK since 1992. Here, she shares with us her thoughts on the challenges facing the industry.

This attitude of the press as the “enemy of the people”—do you see any of this?

“In one respect, no. We are hyper-local. We cover local issues that are important to Southwest Florida. But I can’t say it’s been completely removed from my life. I do a lot of community events, and I’m often approached by people in the public who put me in a group of media that can’t be trusted. Sometimes I find myself trying to defend my profession. I can’t say I’ve had that happen to me before (now). To me, this is a big shift in how the media is treated. I don’t believe I am the ‘enemy of the people.’ I see myself as a pure journalist trying to provide unbiased information to people on a daily basis.”

How do you combat the “enemy” image?

“We have to continue to do our job well. Do we make mistakes? Yes. We need to correct them as quickly as possible. We need to do all the things our basic journalism principles tell us to do. We have to do journalism in our purest form. That hasn’t changed. We just need to be hyper-focused on that.”

People say, “I don’t like the media.” But their perceptions change when asked about specific news outlets.

“When I go to the grocery store, for example, I only receive positive feedback from people. People who say, ‘Oh, it’s so nice to meet you.’ … When you talk about ‘the media,’ I do have an opinion about how the media has changed since I’ve been a journalist. Smartphones and those things have changed since I started. People have become a lot less critical of where they’re getting their information. We should have a little more of a cynical eye on what we’re reading and hearing.”

What’s the biggest misconception you hear about your job?

“Some things are silly, like, ‘How do you memorize all that stuff?’, not realizing we have teleprompters. Other things are like, ‘You do the 5, 6 and 7 o’clock news, so you must get in at 4:30,’ not realizing all the work, and all of the people, that it takes to put on a newscast.”

Working in print, I don’t worry about my appearance. But you have that worry on top everything else.

“There’s a lot of pressure in that, especially for women. Hair, makeup, clothing—those are a lot of the emails or phone calls you get. The more experience you get, the more you accept it’s just human nature. You see someone on the screen and think, ‘She looks nice today.’ There’s nothing wrong with that; it’s how we work as human beings. But there is a lot of pressure. Here I am, a 53-year-old woman, working with people half my age. I do feel pressure for how I look. The older you get, the more experience you get and the more comfortable you get. You realize (appearance is) not what it’s about. It’s about experience and perspective. When a major story breaks, my knowledge of Southwest Florida will be what’s most important, and what I can bring to that story.”

How do you feel about the future of the industry?

“When I was a kid, my parents didn’t miss the 5 o’clock news. People had appointment television. We don’t have that anymore. The one niche that local newsrooms have is (being) local. We have the ability to cover our communities and cover stories that are vital to the local community. I don’t see that changing. I do see a more on-demand feature, where the 5 o’clock news isn’t the only thing you go to. Where you can build your own newscast—watch the stories you want when you want. But local news isn’t going away. We want our communities to be successful and we need to be informed. Local news isn’t going away. It’s our niche and it’s a powerful one.”