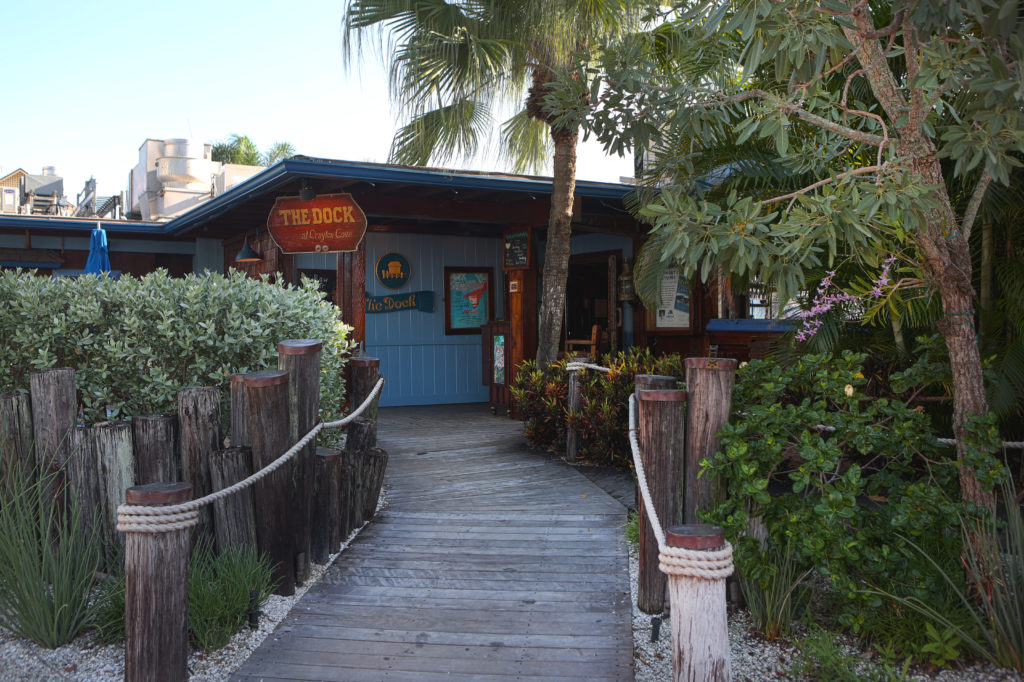 Even though it had been 43 years since Vin DePasquale opened The Dock at Crayton Cove, a landmark on the water serving cold drafts and a mean locally caught grouper and chips, people were stunned to hear that he had sold the iconic restaurant earlier this year. The good news now, several months beyond what could have been a seismic shift, is that DePasquale’s hand-picked successors are a father-son team from Naples who not only have promised to preserve pretty much everything that gave the wood-paneled seafood spot its character, but also are longtime friends of his and are having him stay on in an advisory role. Gulfshore Life sat down with DePasquale; Doug Traina, CEO of Traina Enterprises (the company includes marinas, boat businesses and restaurants in other states); and Dan Groom, co-owner of The Dock, for the full scoop.

GL: Dan, we heard you’ll be running the day-to-day operations. Have you started yet? Can you also tell us a bit about your background?

Dan: I’ll be hands-on all day starting in August. I’m currently finishing up my job in New York City with Blackstone and moving to Naples. The idea of working with Doug, to be honest, was something we had been kicking around for a few years now. But it was important for me to go out and have my own experiences. I was fortunate enough after graduating from the University of Notre Dame to first work at Morgan Stanley and then at Blackstone. Then my dad’s and my conversations became, “What’s next?” The first idea we had was for me to start at TEI [Traina Enterprises Inc.], and then this opportunity came up to make something happen with The Dock because of our relationship with Vin. Having grown up in Naples—I went to CSN [Community School of Naples] from first grade to 12th grade—and being familiar with the restaurant and its landmark status, it was too good to pass up.

GL: Vin, what motivated you to sell the business at this juncture? Why now?

Vin: Well, the answer is kind of surprising. For years I’ve been getting offers on the restaurant, and I’ve never paid any attention to them. When Doug came along, we were entertaining another offer, and as we started to talk, he started to make more sense to me that maybe this would be the right thing to do even though I wasn’t in the mindset of selling. It was because we were good friends, and his intentions were so similar to mine. It seemed like a great opportunity not only to maybe part from the company—although I’m still not ready to do that because this is a passionate business for me with longtime relationships with employees and clients and the other downtown restaurateurs—but Doug has a similar passion to keep this restaurant exactly as it is. I’m not saying it won’t change a bit with trends or with Dan coming on board, as he’s younger, but it seems like the vision we had was the same.

Doug: It’s an amazing set of circumstances, a perfect piece to the puzzle—Vin and I being friends for decades and Dan wanting to get into entrepreneurship. All of it combined and kind of came together. Everything just fit very well.

Vin: I thought it would be a great way to introduce the next chapter of The Dock, and Doug offered me the opportunity to consult for a few years, and maybe I can ease myself out gracefully [laughs]. Any other way, it wasn’t really attractive to me. They’re making it very easy for me to continue to be a part of it and continue to help transition—to get the staff familiar, the accounting familiar, the marketing. There’s an ease for me, as well as an anxious desire to hang. I’m looking forward to it, and it’s working well—we’ve been working together now for three or four months.

GL: Doug, what is your vision for The Dock’s next chapter?

Continuity—what the experience is already. You can’t go anywhere in town and speak to someone who hasn’t been to The Dock. As Vin said, there will likely be some changes, small tweaks with the trends, but the look, feel and atmosphere will basically stay the same. A big part of the recipe for success has been unbelievable service from the staff. We obviously serve delicious seafood, the atmosphere is casual and lively, and the view is irreplaceable. Given the location and history as part of Naples’ downtown, I hope to carry the torch and continue that vision.

GL: Will the same chef stay on board?

Doug: The chef [Corey Heath] is definitely staying on. He’s been there for 15 years, and he’s excited. He will also help with our other restaurants, too.

Vin: We will continue to develop the menu as we always do, changing it with the seasons. We’ll be introducing our happy-hour menus that will start at the beginning of May. We’ll start to peel back the full menu for the softer season with a select couple of items that might reappear in the fall. This is what we’ve always done. We also plan to keep our promotions, like Sunday brunch with the bloody mary bar and the Dickens Fest in December, and coordinate them with Dan. Again, if Dan might have different ideas, we’re open to them. Fresh eyes are very important.

Dan: I couldn’t agree more with everything you’re saying. As we continue to sit down, if there are other promotions, events and opportunities to pursue, we will, but we don’t envision making changes to the events that are already done.

GL: Is there anything else you’d like to add?

Doug: As you know, Dan’s last name is Groom. There was someone else there—Dan’s father passed away when he was younger. I fell in love with his mother, and Dan is officially my son. It is incredibly exciting for me to have that father-son relationship in my business. I have four other children, this is my 38th year in business, and to have Dan in my life and to have him working with me is just astonishingly wonderful. I’m really looking forward to that and many years to come working together.