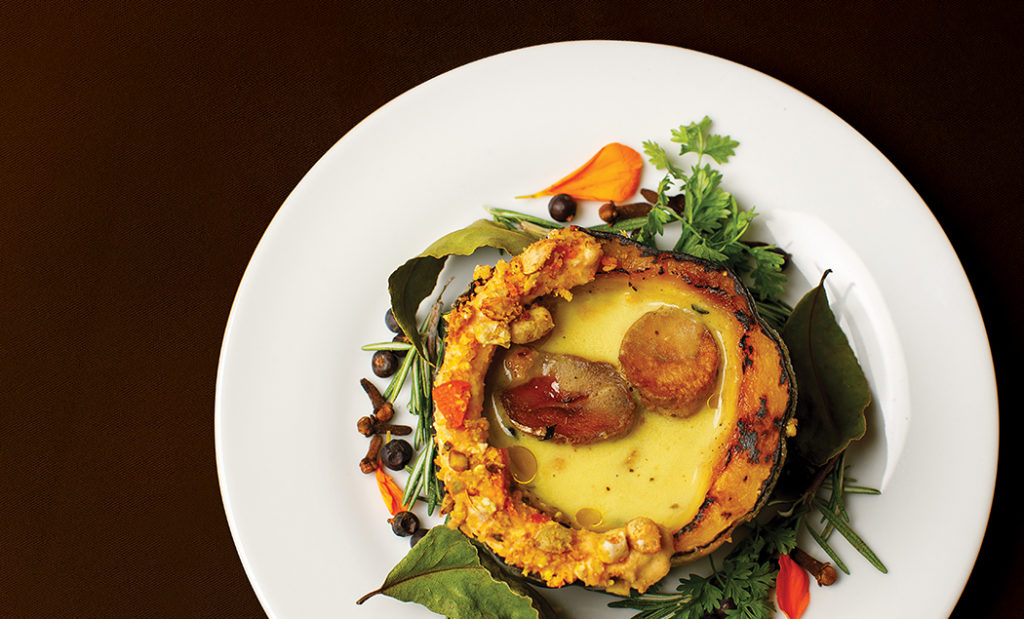 A giant 9-month-old owl flapped its wings from its majestic perch and gazed upon the dining room.

His guests numbered 98, many clad in zebra-print scarves, leopard Valentino flats and hats from actual treks in the birthplace of humanity. They sat at eight-person rounds under a towering canvas tent outfitted with camp furniture and bronze giraffe sculptures sourced south of the Sahara—and none of them could take their eyes off him, either, until the food started showing up. 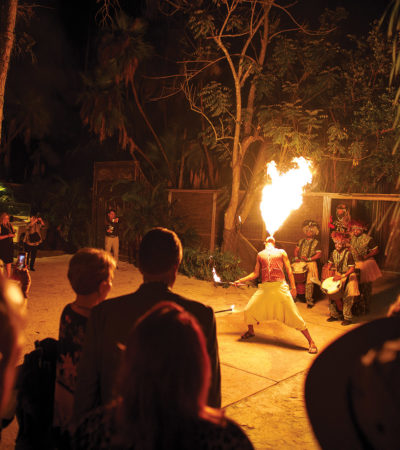 As the first plates were placed on woven rattan chargers next to glasses of 2015 Tokara Chardonnay from Stellenbosch in South Africa’s Western Cape, the masterpiece about to be consumed was another sight to behold: a Lesotho winter gourd soup, with notes of coriander and cumin. Slices of fingerling potatoes bobbed in the curried broth, and toasted fenugreek with ground nuts, seeds and freeze-dried corn were meticulously, artfully scattered along the rim of an edible vessel held in place by an apple puree. “I don’t get to say this often, but by all means, when you’re done, eat your bowl!” encouraged the chef, Brian Roland of Crave Culinaire.

Just moments before, Roland and his team were racing behind the scenes to make sure everything was perfect for each of the four courses paired with wine. The stakes are always high with his clientele of Naples epicures. But these were higher than usual, because this dinner on Feb. 6 was billed as the event of the season for the Naples bailliage (or “chapter,” in French) of the Chaîne des Rôtisseurs, a gastronomic society dating back to 1248 with more than 25,000 members around the world. The Naples chapter, with 143 members, is largest in the United States. And its leader, or “bailli,” Roger Weatherburn-Baker, has been on a perpetual quest since taking the reins several years back to make each dinner bigger, better and more spectacular than the last—which is how he came across NGALA Wildlife Preserve and reached out to its owner, Donovan Smith, a year ago to plan it.

“Most people in the Chaîne can go to any restaurant any time of the year, and most have traveled extensively,” Weatherburn-Baker says. “I decided that we needed to do things differently. We started to do themed dinners—a Venetian Carnivale, a Chinese New Year, a Sicilian Godfather experience. And this dinner, too, is a perfect example of how our food and wine is more specifically coordinated with entertainment and décor.” 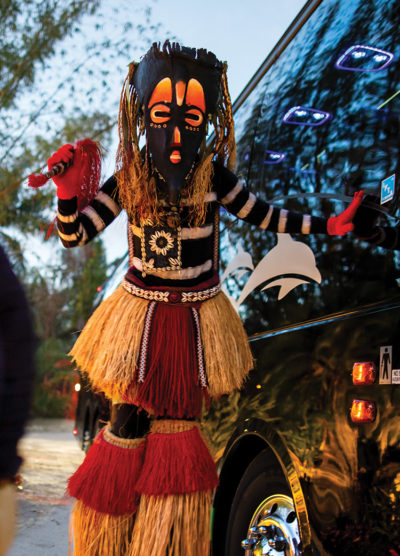 The magic started on chartered luxury coaches that whisked the attendees from North Naples to the NGALA grounds in Golden Gate Estates. It was an extra touch, along with a playlist curated by Weatherburn-Baker to get people in the mood (with Ladysmith Black Mambazo, Soweto Gospel Choir and African Tribal Orchestra, to name a few). He thought transport was appropriate (and wise), given the driving distance and heavy amount of South African wines to be consumed. (For events closer in town, guests are urged on the invitations to use Uber.)

The chapter has annual dues that people pay on a local and national level, but all events have an up-charge to cover the rest (tickets usually run in the $200 to $300 range per person). It also keeps a wine cellar, but during Weatherburn-Baker’s tenure as bailli, he’s changed the strategy. Rather than perpetually buy great wines at discount prices and storing them for future use, he has kept a rather lean 800-bottle collection in favor of picking out specific wines for his themed events (German whites for an après-ski soiree or, here, from Cape Town’s leading producers).

That night, upon stepping out of the coaches, most people had a we’re-not-in-Kansas-anymore moment. Stilted performers in full costume greeted the buses by a small waterfall near the tent’s entrance. Servers in safari gear passed out deceptively sweet African Rum Runners and a vintaged Cape Blanc de Blanc Brut from 2014, as well as bite-size potato cakes with mango chutney, piquant peanut chicken skewers and piri-piri shrimp.

In addition to the feathered friend who graciously posed for pictures, the grounds were open for ladies and gents to stroll past drum circles and fire pits to pet a white rhino (whose dry, dusty pelt felt and looked a lot like that of a cantaloupe). Another popular stop was to let a very, very hungry giraffe slurp up carrots with his coiled gray tongue—he ate enough to have fed an entire bunny burrow throughout winter. And, a perk with all Chaîne events, a professional photographer roamed the party taking pictures for members to later download. 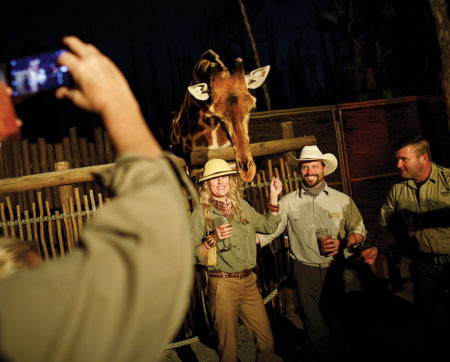 “This is a one-of-a-kind experience. I just love the theme,” says Ingrid Aielli, the group’s vice conséiller culinaire, a position that puts her knowledge as a restaurateur to good use. (She with her husband, Fabrizio, are the owners of Sea Salt, Barbatella and Dorona.) “It is unique and really special. Roger told me I had to come to this one, and so I made sure I did.”

Longtime members of the group say the events take on the personality of the bailli. Aside from the obvious changes to how the dinners are structured, Weatherburn-Baker, a proper British gentleman with an exceptionally warm demeanor, used his powers of observation as a former Financial Times journalist and communications executive for IBM to make some operational shifts—growing the board two-fold to help keep the ideas fresh and the chapter running like a well-oiled machine. “We went from planning a month or two ahead to planning 12 to 18 months ahead,” he says. “I figured the more we could get people involved in the events, the more we become a group. And once you have a team in place, you can delegate and get things done way in advance.”

NGALA, which in Swahili means “den of the lion,” has been rescuing animals and opening its grounds for private social events and weddings for ages.  Smith jokes he got a turtle at age 8 “and there was no turning back.” He courageously worked with firefighters to guarantee all 45 animals in his care survived when a brushfire razed the property in April 2017. Smith escaped, but not without being covered in second-degree burns and needing to spend a month in the hospital and three more rehabilitating at home. But he brought his precious cargo back and made a full rebound.

Roland’s company, Crave Culinaire, is the exclusive caterer for the space. He and his team have set menus with varying influences that NGALA clients usually choose from, but for this brisk February evening, they came up with four unique courses, a challenge with which Roland was familiar. 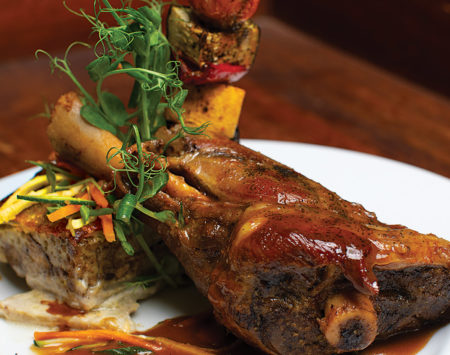 Roland, who is a member of the Chaîne (the organization globally is open to both culinary professionals and passionate civilians), rose to the task. He knows he has cooked at least five and “probably closer to 10” of the group’s dinners during his career. He’s best recognized for pyrotechnics and feats using foam and liquid nitrogen, but in this case, he made a deft move and kept the bells and whistles subtle to pump up the focus on authenticity. His South African sous chef, Leon Davis, helped inform many of the choices, like suggesting bobotie, a beef and potato pie, to go alongside a roasted lamb shank. The shank had been in a sous-vide bath for 14 hours until it fell apart with the prod of a fork; its aromatic spice blend included cumin, green curry, cinnamon, cardamom, coriander, turmeric, ginger, paprika and cayenne. As a sum, the meal felt like what you might expect of a five-star contemporary dining establishment in Cape Town—nuanced African flavors presented with panache.

Weatherburn-Baker, who handles everything when it comes to the Chaîne with the precision of a master chef and the soul of a Gospel singer, admits he does feel pressure at times. “You know,” he says, “it’s hard sometimes coming up with events every single month. I’m worried I might run out of ideas.”

But given his track record, the members don’t doubt he’ll keep reinventing the wheel. After the NGALA event was the annual induction ceremony in March to bring new members into the fold. Not only was it to be at the exclusive Bay Colony Golf Club with its new chef, Timothy Recher, but Weatherburn-Baker came up with a “Banquet in Versailles” theme with a special collaboration. Weatherburn-Baker arranged for Recher to team up with Reimund Pitz, his coach for the 2020 International Culinary Exhibition (more commonly known as “the culinary Olympics”), bringing together two experts in classic French cuisine for a four-course showcase. And to attract younger families to the group, the board is staging an April picnic with an extreme waterski show at Sugden Park that’s specifically welcoming of kids.

That late February night, however, as stars glowed in the distance and owls hooted closer-by, Weatherburn-Baker sat next to his wife, Paula, under the cathedral-ceilinged tent. Member after member came up to congratulate him. Don Mann, who joined in 2015, put his hand on Weatherburn-Baker’s shoulder and marveled, “This is your best ever—this is a really, really cool dinner. I wish I invited 10 of my friends.” 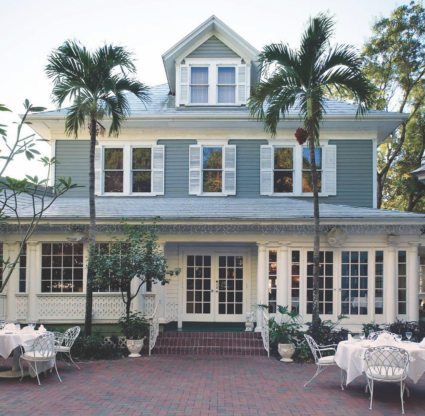 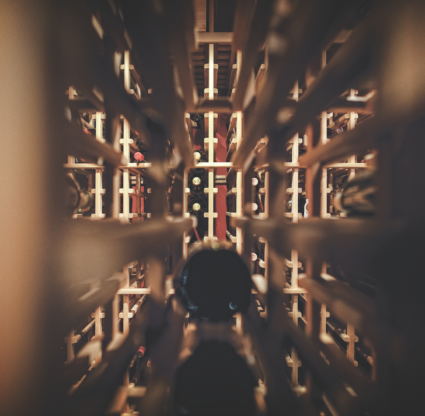 Naples Fine Wines’ Larry and Cheryl Andrews refine the palate, one glass at a time.
Menu
About