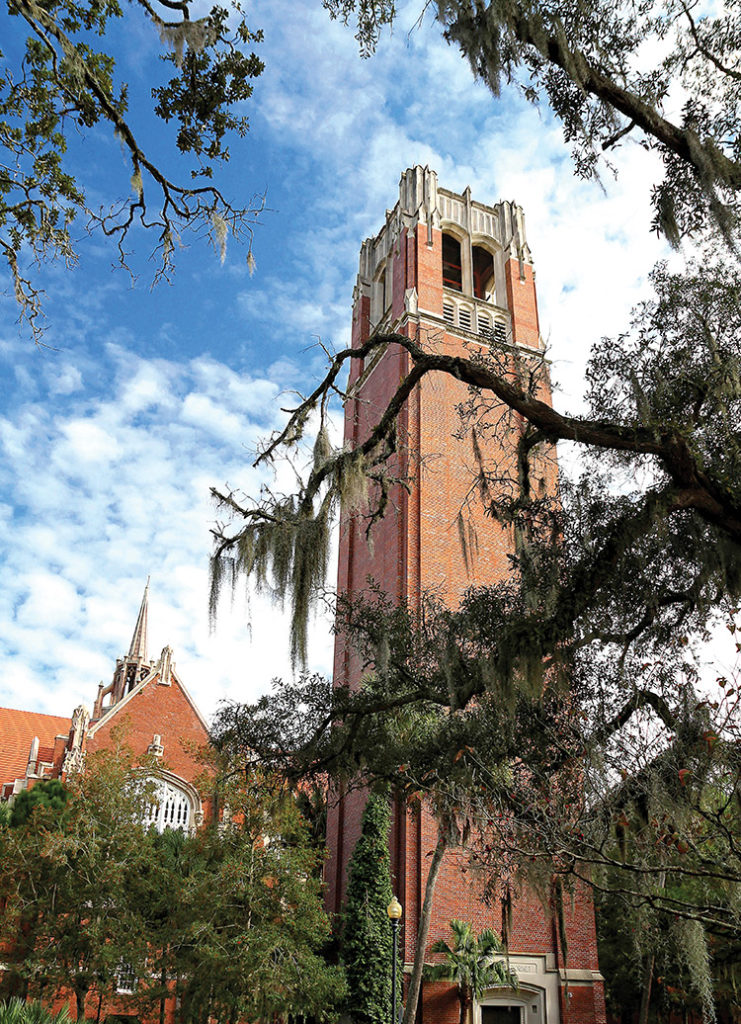 Gainesville, Florida, USA - November 20, 2015: Century Tower Carillon located in the University of Gainesville central campus, built as a memorial for alumni who perished in World War I and World War II.

My sister, who loves patchouli and crystals, recently convinced me to go to Gainesville for a women’s retreat.

“You’ll need a drum,” she informed me as I was packing.

I arrived in Gainesville in the late morning with a day to explore this college town seemingly in the middle of nowhere. Willie Nelson was singing Blue Eyes Crying in the Rain on the radio in my car when I pulled into town, and he was playing inside Satchel’s when I took a seat in Gainesville’s famous hipster pizzeria. Long a staple for locals and visitors, Satchel’s offers its pizzas and salads, plus homemade sodas, in a quirky-cool setting. There’s even an old VW bus in front outfitted with seats and a table. I ordered a personal pizza topped with ham because that would be the last meat I’d see for days.

Gainesville itself is filled with large oaks hung with Spanish moss and the kind of coffee shops and diners that dot small towns across the South. The downtown is quaint and bustling, mixing trendy spots among hints of history and more stalwart haunts. Near the University of Florida’s main campus, though, it suddenly becomes urban. The diners give way to Burger Kings and Chipotles, and the streets—wide and open and empty on the outer edges of town—are packed with coeds. But the campus is the heart of the city. With its rolling hills, gator-filled lakes and more of those stately oaks, the campus feels equally like a seat of higher education and a testament to Old Florida. People flock to its bat house in the early evenings to see thousands of bats take to the night skies, they listen to the bells from Century Tower played twice daily by music students, and they share in the vegetarian Krishna lunch held on the lawn each week. The 34th Street Wall with its layers of paint from years of public art stands out as a bright graffitied monument to remembrances, marriage proposals, birthday wishes and advocacy.

“I can’t figure this place out,” I said to my sister when I picked her up on the outskirts of Gainesville. She’d ridden from the other coast in an RV that smelled like nag champa and tahini. “Is it a small country town? Or is it a college town?”

We drove past stately houses, freshly painted and bright when we were closer to campus and then faded and more dilapidated the farther we got from the university. As we left the college behind us, small businesses cropped up again—Low Budget Muffler, a junk shop, a dive bar called Ole Barn—and the live oaks took over. In this part of Gainesville, old pickup trucks filled parking lots and the lush greenery of central Florida pressed in on all sides. The nearest highway was a 30-minute drive.

Outside of Gainesville, there’s even more to visit—Paynes Prairie with its miles of hiking trails plus herds of wild horses and bison, the massive sinkhole and waterfalls of Devil’s Millhopper, and the crystal-clear, perfect-for-tubing waters of Ginnie Springs. But on this particular trip, we had other plans.

In the passenger seat, my sister flipped through the retreat booklet which had a schedule of the weekend’s activities and a “What to bring” list.

“Did you pack your compass?” she asked me.

I glanced at her. “Why do I need a compass?”

“For the vision quest.”

I kept my eyes on the road and my mouth from laughing.

“My phone has a compass,” I assured her.

I could feel her stern gaze. “This is a technology-free weekend,” she said in her best big-sister voice.

In that moment my phone, as if in protest, piped up. “You’ve arrived.”

We glanced around. We were on an isolated country road surrounded by tall trees and impenetrable bushes. A rutted dirt road stretched in front of us. We looked at each other, worried, and my sister scanned the booklet.

“Ah,” she said in a relieved voice. “It says the GPS will say we’re here when we reach the dirt road, but—this is in bold.” She read out loud: “‘Please continue on the dirt road. It is bumpy, but that means you’re in the right place.’” Her face beamed. “We’re almost there.”

I took my foot off the brake and eased us forward over the rough road. The green forest closed in.