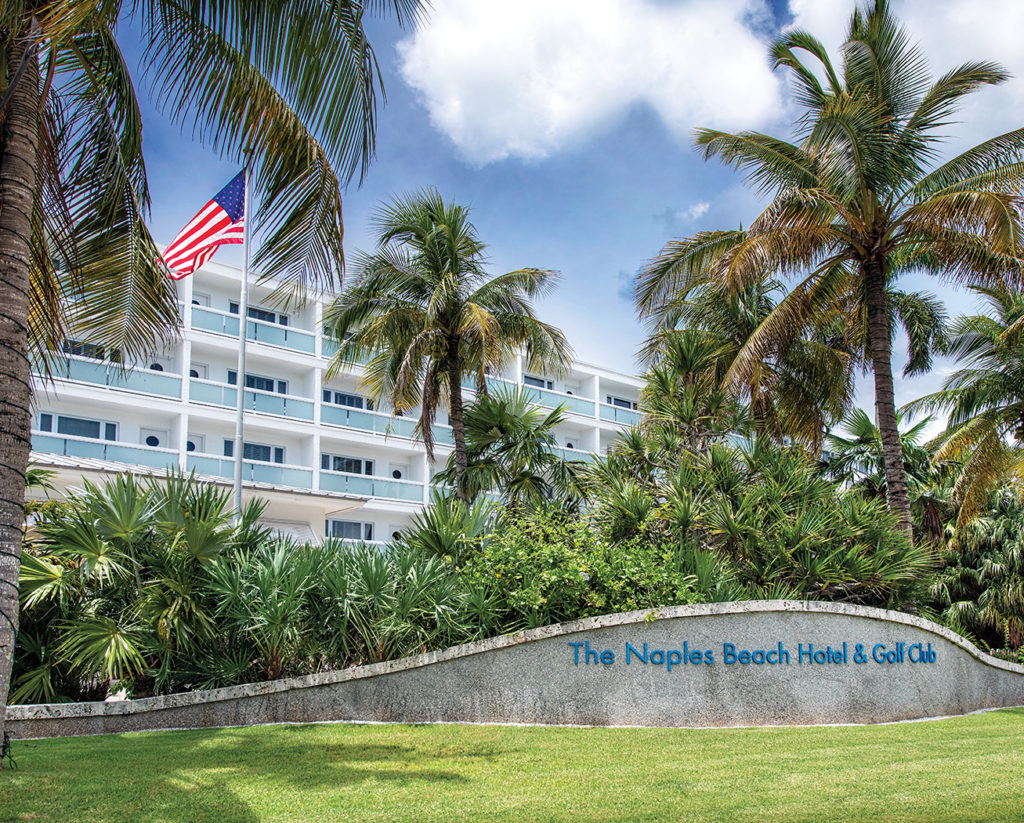 While patrons come and go from the Naples Beach Hotel & Golf Club, there was always one constant: the fair-haired, boyish Mike Watkins, one of the co-owners of the resort his family bought in 1946. When he served as the general manager, he would be there parking cars and circling the dining room refilling water glasses and busing tables. Few owners lead by example to that extreme, but that’s the legacy of stewardship and service the Watkins family established in its more than seven decades at the helm of the storied hotel.

Throughout the years, the Beach Club, as us locals call it, has meant so many things to so many people. I, for one, have been covering stories there as a journalist since 1979. I learned to play golf on its greens—one of the most iconic courses in Florida—back when it cost $300 for the entire summer. I socialized there after-hours at the The Brassie and Sunset Beach Bar, where I also met my wife 33 years ago. We still make it a point to stop by the poolside bar when we go to the beach.

For longtime locals, any mention of this hotel is personal. That’s why there’s been intense interest in its fate since October 2016 when the Watkins announced they were thinking about passing the torch to new owners. Talks about plans to raze and enlarge most of the property were endless—and sometimes heated. This spring, the Watkins said they’d be selling to The Athens Group, a Phoenix-based developer and builder of world-class resorts such as the Inn at Palmetto Bluff, Four Seasons, Ritz-Carltons and several Montage hotels. The group is planning for a total rebuild, but they promise to maintain the public access to the golf course and restaurants.

It’s a testament to the goodwill the Watkins have fostered in Naples over the years that this community, which usually resists such change, is trusting the Watkins’ belief that Naples is not losing a friend; it’s gaining a new one.

When I came to the Naples Daily News as a junior editor, Collier County was about one-fourth the size it is now. Naples was the population hub and the Beach Club was at the heart of it all. “Almost every charitable fundraiser took place at the Naples Beach Hotel, and almost everybody in the room knew everybody else. It was a wonderful time in this extraordinary small city,” says Corbin Wyant, who spent a lot of time at the hotel when he was the Daily News’s general manager and publisher from 1977 to 2002.

Back then, the newspaper was located on Central Avenue, near the hotel. I’d often hop over for lunch or to interview visiting dignitaries. I recall shadowing 1980 presidential candidate George H.W. Bush in his hotel room one afternoon when he was in Naples for a fundraiser that netted a then-astounding $90,000. James Baker was the campaign manager at the time. A year later, I helped map out the coverage of Bush’s first official trip as Ronald Reagan’s vice president. One of the greatest highlights was when I interviewed Governor Bob Graham over sodas in a lobby bar after he was feted by the Conservancy of Southwest Florida. He gave me a national scoop when he told me the Pentagon would join the war on drugs. I jotted everything he said down on a paper napkin. The next day, we broke the story.

I had a seat at countless Forum Club of Naples luncheons, too. Henry Watkins Jr., Mike’s dad, offered to host these high-power meetups. Over the years, the lineup of speakers has included U.S. Army generals, the CEO of the New York Stock Exchange, mayors, and head football coaches. Former Naples Vice Mayor Alan Korest was there when they hosted the organizational meeting for the Forum Club 35 years ago. “It has become arguably the greatest source of valuable information, perspective and camaraderie within our community,” Korest says. “Although it seems likely that other bookings would be far more profitable for the hotel.”

I spent a lot of time in this resort. Many  of our newspaper’s Christmas and retirement parties were spent in the Sunset Terrace room playing guitar with an impromptu band led by our publisher.

I’m not alone in my affection or longstanding memories of the Beach Club. “I remember paying all of $6 to play one of my first rounds there when I was 10 years old,” says former state Rep. Dudley Goodlette. “That was more than I could earn in two days shining shoes at Rice’s Barber Shop.” Naples matriarch Lavern Gaynor points to the fact that the Watkins not only shared their property but their time. After her father, Lester Norris, passed, Mike Watkins advised her on how to run the Keewaydin Club. Gaynor was the lone family member in town and didn’t know the business. “He gave me confidence at a stressful time,’’ she says.

Naples historian Lodge McKee put it best when he told me: “For many of us, it was a centerpiece setting. It was much more than a hotel. I and many of my cronies met our future spouses there. Our children attended classes there for dancing and social graces. It truly was the engine of tourism, entertainment and commerce.’’

“Through all the years the Watkins family members have left their fingerprints on much of which has made us recognized among America’s most marvelous communities,” says Mike Reagen, former CEO of the Greater Naples Chamber of Commerce.

A lot of what we see in the city today can be credited back to the Watkins family. When Henry Watkins, Sr. bought the hotel with some friends, the deal included 2,200 acres—most of Naples back then. He developed housing, donated land to build parks and the hospital, and helped create a plan to assure beach access, forbid high-rises and create sidewalks. And the hotel continues to give back today. Through the Learning Independent Functional Employment program, the resort prepares developmentally disabled high school graduates, ages 18-21, for hospitality industry jobs in food service, desk work, groundskeeping and event set-up. Some 250 students have participated since the year 2000.

The Beach Club’s influence is wide-reaching.  Yet at one time, it seemed threatened when The Ritz-Carlton, Naples arrived in 1985. Instead, the two bolstered each other. The synergy helped lead to the creation of the Resort & Hospitality Management program at Florida Gulf Coast University. “The Beach Club established a laid-back atmosphere,” says Ed Staros, part of The Ritz-Carlton’s founding team and the current vice president and managing director of both Naples properties. “We just formalized it. The Watkins family name represents the birth of the local hospitality industry.”

To really understand a place, it’s important to look back at its history. In my research, I learned more about the hotel than I thought I knew.

The resort’s predecessor, the Naples Hotel, a three-story wooden structure built in the late 1880s, was accessible to guests only by boat via the Naples Pier, a few blocks west. The property was part of the awakening of Southwest Florida, providing lodging for hardy tourists interested in exploring Florida’s “last frontier” and potential investors looking to claim their stake in the fledgling region.

Over the next half-century, the property expanded modestly while catering to an elite clientele. At the turn of the century, the hotel was the geographic and social center of Naples. The golf course, the city’s first 18-hole championship course, came about in the late 1920s, and though it wasn’t part of the original hotel, it would later become its cornerstone.

After World War II, Henry B. Watkins, an Ohioan manufacturer of steel dollhouse furniture and toy guns, bought the Naples Hotel. His grandson told me Henry then became a contractor selling real guns to the U.S. government. He “sold high” after the war and decided to invest in this tiny town with a single-page phone directory after visiting on fishing and hunting trips with friends a few years earlier. An avid golfer, Watkins bought the golf course and clubhouse, which sat across the unpaved Gulfshore Boulevard. He expanded the hotel to include lodging near the course. After Hurricane Donna came through and rendered the aging grande dame down by the pier irreparable, the family rebuilt around the golf course. The club became the foundation for the hotel we see today.

The 125-acre, seven-building Beach Club campus went up in stages through 2000—hence the quaint, eclectic blend of old and almost new. But the owners always worked to retain a Floridian sense of place. Browse the main lobby and you’ll see planks from the original wooden hotel, Clyde Butcher photos and wildlife murals.  The Watkins are proud of the region and have always wanted visitors to know they are in Naples, not Anywhere USA. The Athens Group shares the same ethos, which is partly why the Watkins chose them among nearly a dozen suitors.

It’s a lofty and weighty endeavor. “The Naples Beach Hotel is Naples,” says Myra Daniels, founding CEO of the Naples Philharmonic. She recalls the many fundraisers she hosted and attended there. “We always felt welcome, and the Watkinses knocked themselves out to be good hosts. It is important for their successors to continue that kind of sharing.”

The Athens Group’s Jay Newman gets it: “We are honored and privileged that the Watkins family selected us to reimagine and improve this iconic property for future generations, especially since the family was instrumental in making Naples the warm and wonderful community that it is today.’’

As Newman prepares for the future, those of us lucky enough to have known and loved the Beach Club have two more years to reminisce and offer our private goodbyes. The last time I was in the main lobby, I felt as if I were in church surrounded by the spirit of a higher power. Go see for yourself and breathe in the magic. What The Athens Group will build on that hallowed site is bound to be a lovely, new landmark. But there cannot be another Beach Club. That storied place will reside safely and soundly in our memories.