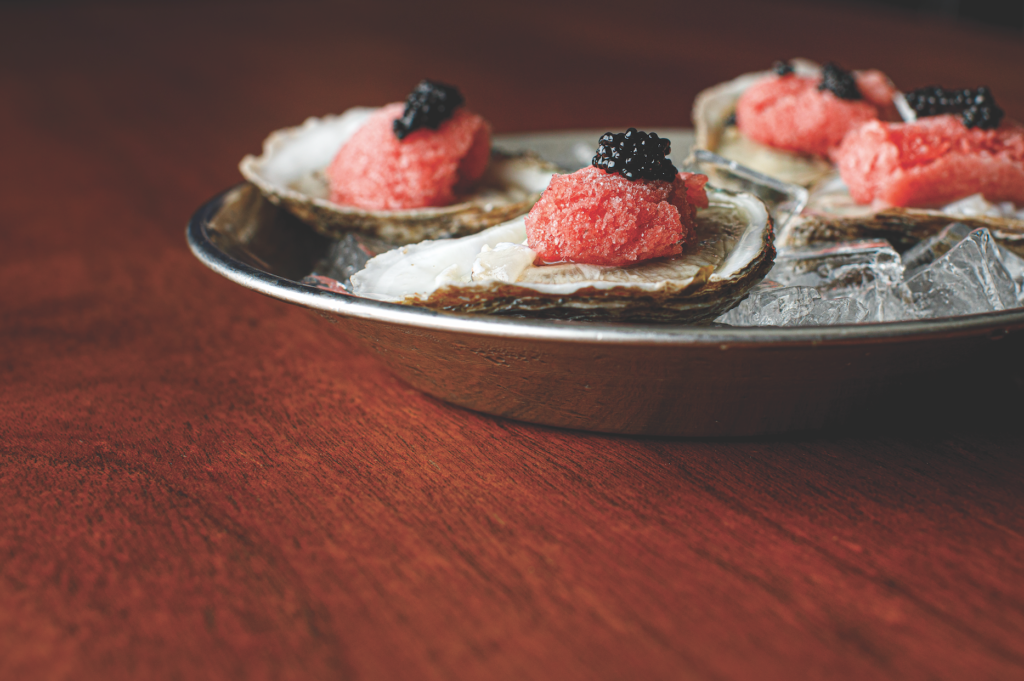 The Fancy Oysters, a quartet served with a strawberry-pepper granité and caviar, at Blue Pointe Oyster Bar & Seafood Grill in Fort Myers. (Photography by Brian Tietz)

When you live in an area rich with shellfish, the best date nights often consist of going to a good raw bar to partake in the sea’s finest delicacy.

Sure, oysters may not be as pretty (or attractive to eat) as other foods, but, as with any romance, it’s what’s beyond exterior appearances that counts. In this season of amour, there’s nothing like a freshly shucked dozen to rekindle your passion for these slightly salty treats from the sea.

Fortunately, the Gulf is bountifully stocked with seafood options—whether you’re in the mood for Apalachicolas from the Gulf, Cedar Key’s Pelican Reefs, Eastern Oysters or a little from both coasts, these three spots for lovers serve up the best of what legendary cook James Beard called “one of the supreme delights that nature has bestowed on man.”

Since Blue Pointe opened its doors back in 2003, the population of Fort Myers has increased by more than 25,000 people. That’s not to say that this restaurant brought in all those new residents, but as the city continues to grow and develop, it’s pleasant to have established favorites that diners can still count on, alongside the exciting new options. And since Blue Pointe underwent an eye-catching renovation in 2014, it’s now familiar and fresh at the same time—just look at the modernized decor, the menus on interactive tablets and the trusty raw bar specials.

Guests are drawn back for the food. Chef Andy Brown’s creations and ingredients are top-tier—from the Georges Bank sole to Little Neck clams, the restaurant prides itself on 100 percent traceability to reputable suppliers of sustainable seafood, which helps ensure their oysters are choice grade.

The selection rotates daily, so check with your server for specifics to know you’re getting the really good stuff. The “Fancy Oysters” are always highly recommended, though: a quartet on the half shell served with caviar and a tart strawberry-pepper granité. The order is an outstanding lead-in to the house special seafood paella—truly a perfect match.

Explicitly inviting comparisons to “The Great Gatsby” is a bold move, but you have to give credit where it’s due: The Fitzgerald quote on the wall is just the tip of the Jazz Age-style iceberg at Marco’s The Oyster Society. This 2017 addition to the Carvelli Restaurant Group (think DaVinci’s and Marco Prime Steaks & Seafood) evokes casual-luxury, like when Lady Elegance lets down her hair to enjoy live music, killer drinks and a magnificent seafood menu. If you have a particular oyster in mind, the restaurant is stocked with a broad selection, and your server will happily walk you through the best bets. Then again, you’d also be wise to leave it in the hands of the experts: The Chef’s Dozen offers a daily selection of three oysters apiece in four varietals, to give your palate a savory spectrum without having to debate over choices. The accompanying suite of sauces is also a highlight—and if raw isn’t a must, the combination of chorizo and Manchego cheese on the Spaniard-style baked oysters is extremely tempting.

The view at The Bay House is spectacular—whether you’re looking down on the Cocohatchee River from a wooden deck or in hungry admiration at one of the immense seafood towers from chef Jamie Knapp’s kitchen. The true pearl for oyster lovers, though, is The Claw Bar. Pounds upon pounds of seafood on ice offers its own visual appeal. The bar has been so successful, it yielded its own spinoff last year with a location inside the Tuscan-inspired Bellasera Resort in Naples. While the restaurant’s Old Florida atmosphere is a pleasure all its own, the second locale is an excellent option for diners who are in the mood for a sleeker, more chic ambiance with the same mouthwatering seafood.

The oysters at both locations are as fresh and flavorful as they come, whether you choose East Coast or West—and with the price break that comes from ordering a full dozen, you have plenty of incentive to experiment. Even if you’re here to tackle The Claw Bar’s oysters, nothing says you can’t save a little room for a bowl of corn and crab bisque. And finish with an order of Crescent City beignets or Key lime cobbler.