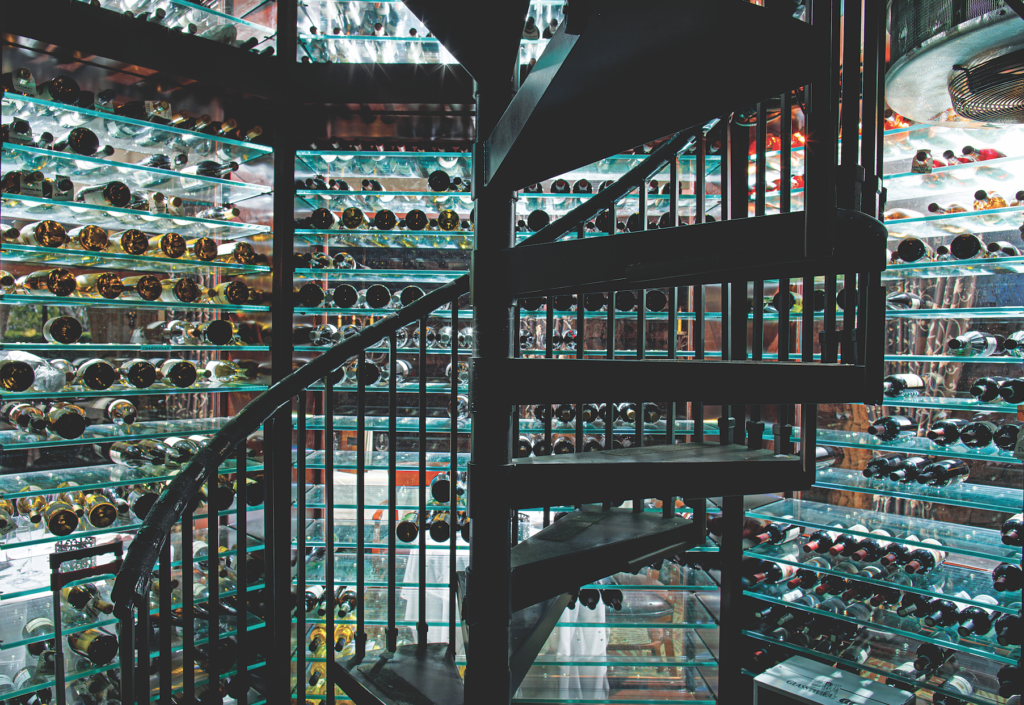 The Bonita restaurant has a 30-foot wine tower that stocks more than 4,000 bottles at any given time. (Photo by Brian Tietz)

As far as wine lists go, Angelina’s Ristorante’s in Bonita Springs is pretty stellar. When diners enter the restaurant, they’re met by a 30-foot-tall, Art Deco-style tower stocked with thousands of bottles that speak to a menu that features no less than 600 varieties of wine. One label that’s been on the menu since day one: Napa’s Terra Valentine.

The restaurant’s wine director, Dinah Leach, is particularly fond of the winery’s 2014 cabernet sauvignon. “A lot of people want to do Champagne or rosé on Valentine’s Day, but this is a great pairing for people who love red wine,” she says, adding the wine goes well with dishes such as the veal chop, pork osso buco, veal marsala and veal agnolotti pasta. Plus, she says, Terra Valentine’s wines always “over deliver for the price.”

To find how the wine fits such a tall order, you have to look to its rough-and-tumble origins. When second-generation winemaker Sam Baxter started working at Terra Valentine in the late ’90s, conditions at the vineyard were rustic, to say the least. The area was remote, with limited space and no running water or electricity. Small patches were hidden in dark forests or along the steep slopes with vines planted at different elevations, where grapes ripen at different times and under different conditions—some receiving morning fog, others warm afternoon sun.

Instead of trying to tame the vineyards, Baxter opted to work with them. Hand-tending vines on this mountain 2,000 feet above  the Napa Valley is a challenge, but grapes that struggle produce juice that is powerful and concentrated. Plus, the vineyards’ location in the Spring Mountain District allows cool temps to naturally stabilize Terra Valentine’s wines, which are stored in a stone cellar carved into the hills.

This cab, in particular, pulls from two of Terra Valentine’s estates, planted on four distinct soil types. “It’s a real mountain cabernet with great structure that makes it distinct from cabs from other parts of Napa Valley,” Baxter says, adding that the ancient ocean beds and volcanic clay create complexity and depth.

Born and raised in Napa, Baxter grew up in a winemaking family. His father, Phil, was one of the pioneering forces in the area back in the ’60s, when California started to gain traction as a world-class wine region. He was hired as a consultant by Terra Valentine in the  ’90s. After Sam graduated with a degree in fermentation science from the University of California, Davis, the younger Baxter, took the reins as winemaker and general manager at the winery and produced his first vintage that same year.

The 2014 bottles are particularly special since “the long and even growing season that year made for a rich and lush structure and are a little softer than other years,” Baxter says. He notes that the cabernets drink best five to seven years from the vintage date.

Hailing from the steep, rugged Mayacamas Mountain terrain, this is a full-bodied wine with a high 14.9 percent in alcohol, but it’s not overpowering. The natural acidity, which comes from the vineyards’ locations in a cool area, pairs nicely with food. “This cabernet sauvignon has nice, ripe blackberry and black plum flavors, and there’s also a bit of red fruit in there, like raspberry,” says Leach. “It’s aged in French oak barrels, so it has a vanilla-cocoa powdery note, reminiscent of chocolate-covered strawberries—very romantic.”

Achieving a balanced elegance while allowing the intensity of the mountain fruit to shine through is definitive of Baxter’s minimal-intervention winemaking style, where there’s little use of additives like colorants or sugar. Making balanced wines is something Sam picked up from his father, who taught him how to ensure all the elements—the tannins, ripeness, alcohol, acidity—sing harmoniously together from fermentation to bottling—and then in the glass.

After perfecting his techniques at Terra Valentine over the past two decades, Baxter is ready for a new challenge. Five years ago, he acquired the winery and purchased an additional 112 acres in the hills at the top of Spring Mountain, overlooking the Pacific. Right now, the area, which straddles the border of Napa and Sonoma, is just as bare bones as Terra Valentine was when he started 20 years ago. It’s another blank slate, which he eagerly embraces as he dives into his next venture: a winery (slated for 2022), which he’s calling “Terra Valentine 2.0.”