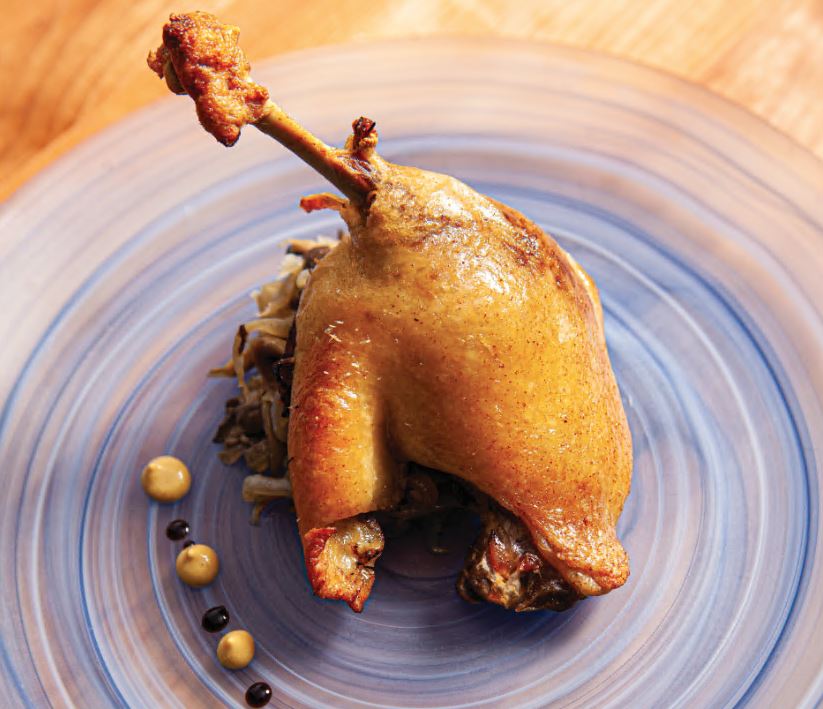 Mystery is a key ingredient at Liberty in Fort Myers. And that’s 100% intentional. Owner-chef Bob Boye says the theme carries throughout the restaurant—from having no sign outside to the delightfully ambiguous menu to the lack of advertising. “Ads just drive up the plate price for consumers,” he says. “My advertising budget goes to the food I put on the plate.”

The chef believes in making the food accessible to create new fans of his boundaries-pushing style of small-plate cuisine. The demure sign painted on the restaurant’s door, not visible from the parking lot, calls the menu “alternative.” The website refers to the restaurant as a “culinary workshop.” The sharp terminology, the mysterious aura, the bold food pairings: It all combines to make customers feel like they’re in on some incredible secret. At least that’s how I felt when I bit into perfectly seared scallops in caramel sauce, served with slices of celeriac.

Spoiler alert: There’s a good chance that you will never be able to taste Boye’s dishes exactly as I describe them here. The kitchen is forever reinventing and upping its game. While a staple item, like the scallops, will always be on the menu, the team will change how they are prepared and presented. The second time I visited, for instance, Liberty’s terse menu description for scallops was “Curry. Coconut. Tomato.”

Other constants include a variation on baby potatoes, usually with truffle oil; short rib done with the chef’s version of Mexican mole; Parisian gnocchi (i.e. made sans potatoes in the style of Thomas Keller’s Bouchon Bistro); and beef tartare. My first encounter with Liberty’s tartare sunk home what the kitchen is about. The cubed, raw strip steak tasted of fresh tarragon, while the deviled egg mentioned on the menu came entirely pureed as something like a pate accompanied with crispy flatbread.

This kitchen embraces risk-taking, and since Boye first opened the restaurant in August, the chef has become increasingly daring with his culinary experimentation. He and some of his staff came from the former Cru restaurant, revered for its maverick style. Yet, he says, he brought nothing of that with him to Liberty, named for the sense of freedom he felt to let his creativity loose on local palates.

Nor did he bring his faithful clientele along. He attributes that to the fact that Liberty only serves wine and beer, which tends to draw a more serious crowd looking first and foremost for the gustatory, rather than boozy, experience.

The drink menu typically lists 12 to 20 above-ordinary wines and about a dozen canned craft beers ranging from Fort Myers Brewing’s High Five IPA to ones I’ve never heard of with names like Clown Shoes and Schwarzbier.

The beverages complement the originality of the cuisine—dishes such as foie gras bread pudding, warm brie with kimchi or, on my last visit, duck confit that still makes my mouth water when I think about it. The leg portion fell from the bone, its fatty richness counterpointed by thick wedges of carrot first cooked with simple syrup then caramelized with the duck. I’d fork a bite of duck meat through an underlay of Dijon-tanged sauce, gathering up sauteed leeks and one perfect fresh blueberry that added pop for a taste unlike any other.

Around me in the sliver of a dining room, I was witnessing similar expressions of appreciation bordering on disbelief. Minimally decorated, Liberty’s design scheme centers around the kitchen, as if you’ve dropped in on a friend for noshes. Ten counter seats are the first to be reserved on any given night. The rest spread among five booths. There’s also a backroom space for private dining with reservations. For parties who call a week in advance, he creates special menus, seizing the occasion to try new dishes that may make it to the next lineup, whenever he decides to change things up. Recently, Boye started serving up one or two nightly off-the-menu items that reflect the team’s latest experimentations.

The service staff, entirely engaged, informed and eager to share recipes and techniques, recommend three to six small plates per couple. They expertly suggest wine. My Cheverny blanc from the Loire Valley not only did high justice to the duck, but made it to my list of go-to whites with its touch of citrusy sauvignon blanc balancing the fruitier chardonnay notes.

Boye says he feels lucky that he hasn’t had to shift on his original vision for Liberty: “People have been very accepting already. I didn’t know that would happen.” Critic reviews rave about Boye’s brave new world, and most nights, the 30 upfront seats fill with reservations, at least until after 8 p.m., when walk-ins may have a chance.

One change, and I thank the culinary gods, is the addition of more dessert options. The goat cheesecake with berry sauce is divine. Now there’s also vanilla bean and sea salt chocolate chip cookie bars, “served medium rare,” the menu says. Another mystery, and another reason to return.