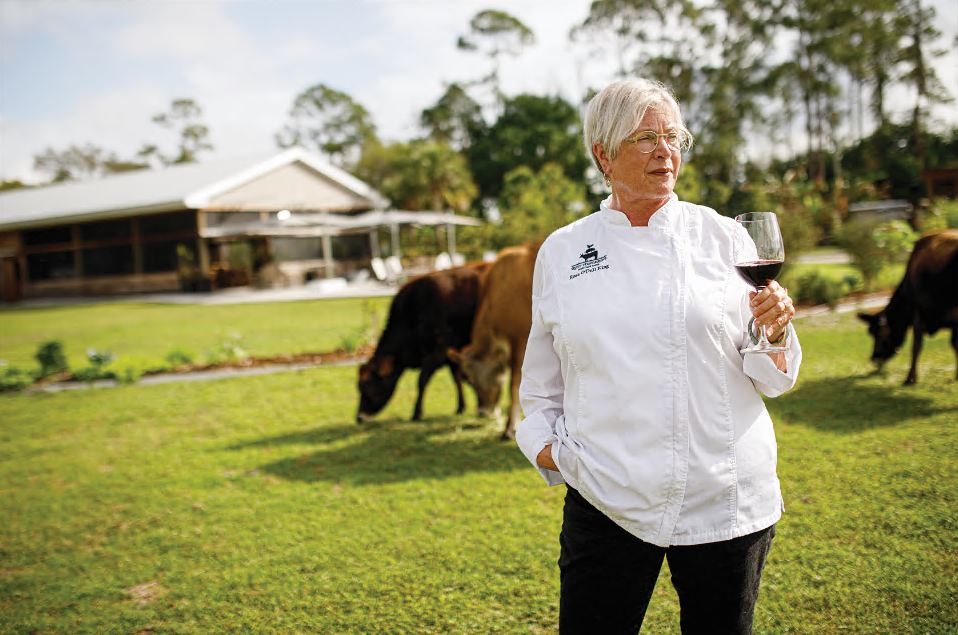 The thoughtfully sourced ingredients used in the seasonal menus at Rosy Tomorrows Heritage Farm in North Fort Myers deserve a wine that follows the same ethos of craftsmanship. For owner Rose O’Dell King, that translates into a syrah from Bibiana González Rave, winemaker and owner of the Santa Rosa, California-based Cattleya Wines. O’Dell King says Cattleya’s Soberanes Vineyard Syrah is one of the finest syrahs she’s ever tasted: “It almost defies description. Taking that first sip is an emotional experience; the finesse and elegance of it is stunning and unparalleled.” She likes that it’s a highly allocated wine made in small batches, much like the other bottles on Rosy’s menu, which is made up of labels diners won’t easily find elsewhere. The wine illustrates obvious parallels between the two women. O’Dell King founded the Southwest Florida chapter of Slow Food to help connect small farmers with buyers. She also sources most of her restaurant’s ingredients from her farmstead. What’s more, as she advocates for local production of produce and proteins, she’s helping to strengthen bonds in the community and celebrating the region’s often-overlooked farming heritage.

Similarly, González Rave sources fruit exclusively from California vineyards. Each presents her a new opportunity to craft her vision of an ideal wine from that particular region—in this case, the Central Coast’s Santa Lucia Highlands. Her Cattleya Soberanes Vineyard Syrah is the one wine for which she sources fruit from her husband’s vineyard, where she notes the farming is flawless. She has been getting grapes for this syrah from the same Soberanes  Vineyard block since 2011. “It’s a very gravelly soil, very mineral; it’s a very cool site,” she says. As her relationship with the plot has deepened, she’s been able to emphasize nuances in the wine and coax forth the complex deep berry fruits and layers of spice syrah is known for. The peppery notes of the wine, along with its structured, yet silky tannins, match perfectly with the heritage beef ragout on Rosy’s menu.

Although González Rave didn’t have much exposure to wine during her childhood in Colombia, the historical context of the beverage, and its ability to link the past with the present, attracted her novice palate. Calling it “a symbol of culture and of humankind,” she says wine has a gravitational pull on her.

Initially, she went to school for chemical engineering in Colombia, but switched gears after two years. She moved to France, where she received a degree in viticulture and oenology. For her first internship, she made syrah in Côte-Rôtie—a Northern Rhône region known for its elegant expressions of the grape. Despite winemaking stints at storied estates such as Château Haut-Brion in Bordeaux, as well as far-flung locales, such as South Africa, she never forgot her first love.

Once settled in California with her winemaker husband, González Rave worked in the Russian River Valley, Napa , the Central Coast and Sonoma

before starting her own project, with a focus on making wines that are pure and terroir-driven.

To her, syrah’s potential is unending. She loves the color and the structure of the wine, and thinks its aging potential—often overlooked—is one of its greatest assets. “I know that people in the New World don’t tend to drink old syrah,” she says. “When you start drinking syrahs that are 20 or 22 years old—or even more—they actually get really close to pinot noir. I love the white pepper character, I love the licorice character, the violets. It can be very floral and it can be very fruit-driven, like really dark cassis or blackberry.” The characteristics combine to make for richly layered and complex wines that she believes are as collectible as Bordeaux or Burgundy.

In the wine world, González Rave is considered somewhat of a prodigy in her craft: In 2014, she was named one of Wine Enthusiast’s “40 Under 40,” and was bestowed the title of “Winemaker of the Year” by the San Francisco Chronicle in 2015. Accolades aside, she feels she has a responsibility beyond making good wine. As an immigrant and a working mother, she’s found that her story speaks to many people. “The articles make me realize I have an obligation to tell my story and to inspire people to be better and to show that hard work pays.”