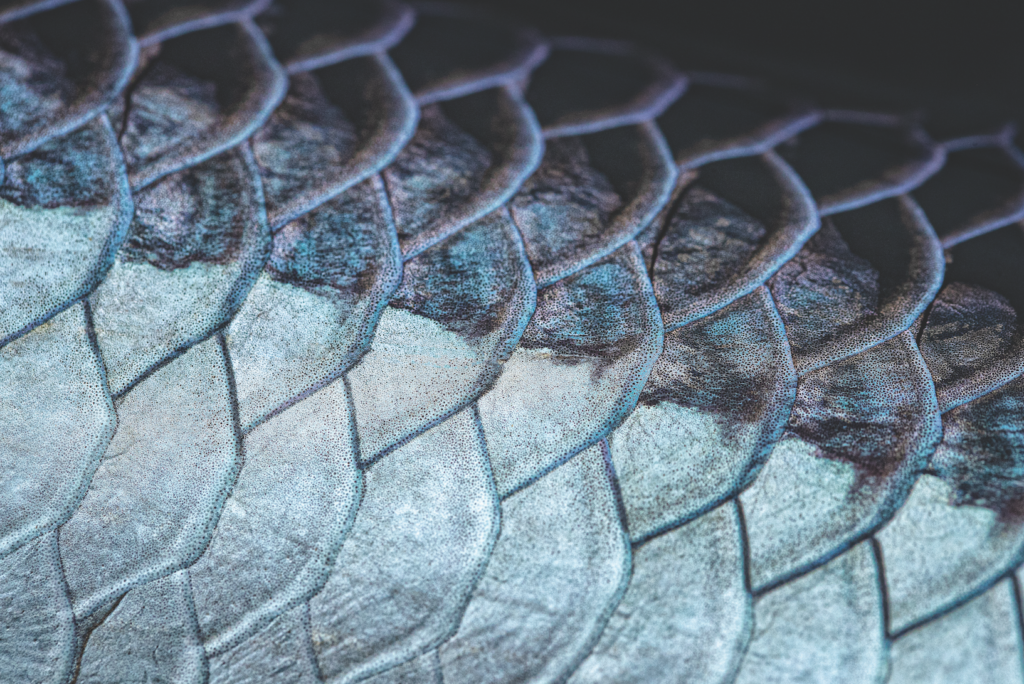 The memory of an epic tarpon battle will remain etched in Jimmy Burnsed’s mind forever. 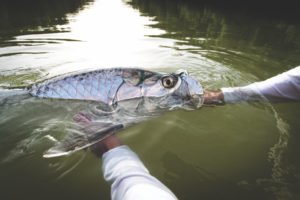 The day had started off typically enough for him and the family he had taken out on a guided fishing trip to Boca Grande Pass. But then it happened—a gigantic tarpon chomped one of the baited hooks, causing a rod to bend like a horseshoe and line to melt off the reel as the animal made its first bullish run. A  heavyweight prizefight ensued, with all aboard wide-eyed while witnessing a series of spectacular aerial acrobatics and surface-exploding head shakes.

Jimmy, a lifelong fishing guide,  knew from decades of experience that even in this area where big tarpon are often encountered, this was no ordinary fish. When the tarpon finally succumbed to boat side for a safe release, Jimmy admired the fish’s length and estimated it to be well over 200 pounds. “I’ll never forget it,” he says. “They’d never seen anything like that—I’d never seen anything like that.”

The reaction is a typical one anglers express when they go toe-to-fin with Megalops atlanticus, the Latin name for tarpon. The big bruisers sport oversized eyes, a prehistoric maw and huge silvery scales. Their majestic appearance and massive size have earned the species the appropriate nickname of silver kings. They represent the quintessential sportfishing quarry. 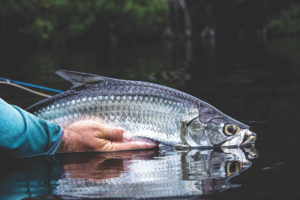 While tarpon can grow to over 200 pounds, the hook-and-line world record is 286 pounds, 9 ounces. They’re commonly encountered in many warm-water, coastal locations from Virginia to Key West, all along the Gulf of Mexico to Brazil, in the Caribbean and Bahamas, and even across the Atlantic Ocean to the west coast of Africa.

Anglers frequently duke it out with specimens in the 50- to 80-pound class. That’s the case in most locations, except for Southwest Florida, where behemoths lurk in the emerald-colored waters.

Boca Grande Pass, in particular, and nearby shallower areas, present silver kings reaching 150 pounds or more. This deep pass between two islands flushes saltwater between Charlotte Harbor to the east and the Gulf of Mexico to the west. During spring and early summer, the currents produce a tempting table d’hote for tarpon consisting of crab, mullet, shrimp and other baitfish.  “Boca Grande Pass is a very unique, special place,” explains Jimmy, a member of the Santiva Saltwater Fishing Team. “It’s the deepest water within 25 miles, and in April, May and June, tarpon congregate there as they migrate down Florida’s west coast.”

Jimmy’s father and mother started the Captiva-based charter company nearly 40 years ago, and over the decades, the Burnseds have cemented a stellar reputation for putting anglers into great action. They’ll catch any of the hundreds of types of fish found in these productive waters, but silver kings reign this time of year.

The advent of recreational tarpon fishing in Boca Grande began in the mid-1850s, when the introduction of stouter rods and reels for big-game fishing replaced primitive spears and gigs. During the late 1800s and early 1900s, wealthy visitors and residents of Fort Myers, such as Thomas Edison, George Firestone, Henry Ford, the du Ponts and the Collier family, discovered the thrill of playing a huge silver king.

Soon enough, a bevy of pioneering fishing guides, known then as boatsmen, began transporting anglers in wooden rowboats to the area’s best fishing locations, including Boca Grande Pass. Charter fees were as low as two bucks per day, and one’s pocketbook decided whether to hire a boatsman, rent a small skiff or fish from shore.

Once the railroad connected from points north to Fort Myers and Boca Grande, fishing resorts sprouted such as Mrs. Potter Palmer’s Useppa Inn, in 1910, and the Gasparilla Inn, in 1912. Famed journalists such as Zane Grey and Ernest Hemingway came along in the 1930s and 1940s, extolling to the world their fishing exploits. Gasparilla Island, in particular, became a playground for the rich and famous.

As the sport of tarpon fishing progressed, tackle and boats greatly improved, too. In addition to tarpon, which still take top billing, anglers learned the waters were also ripe for jousting with redfish, snook, trout and other gamesters.

The future of the Burnsed guiding dynasty took root in the 1970s when Jim Burnsed started to vacation on Sanibel Island. To him, it was akin to an art lover discovering a Rembrandt in the attic. Jim was entranced by the green coastal waters, the tranquility of island living and the excitement of a growing tourism industry centered on fishing. In his baggage was the promise of a healthy, outdoorsy lifestyle for his family and the inheritance of being a quick learner. It didn’t take long for Jim to move his wife and young kids from Orlando to Sanibel.

Originally hired to caretake a small marina and cottages at Blind Pass Bridge on Sanibel Island, Jim oversaw sales of bait and tackle and rentals of small johnboats. Many guests expressed interest in going fishing, but they didn’t know the best places. Jim gladly obliged, and soon he was getting paid to explore Pine Island Sound, Boca Grande Pass and other nearby waters.

He excelled and became a highly sought-after guide. His wife Laura pitched in to run the marina and cottages. Soon, brother Joe Burnsed and his son Joey arrived from Jacksonville to help. The happy property owner signed Jim on to run the marina for another few years.

In the ensuing years, Jim built a home on Sanibel, and he and Laura added to the family by adopting a son named Tommy Reed, a boy with Down Syndrome. For decades, until Tommy passed away in 2013, Jim and Tommy were inseparable. “If you fished with my dad in the ’80s or ’90s, you fished with Tommy, too,”Jimmy says.

As the family grew, what evolved is a formidable guiding crew, known far and wide as the Santiva Saltwater Fishing Team. “A lot of the professional fishermen you see out here today  got their start with my dad,” Jimmy says, noting that his father has always been generous in sharing his know-how with young anglers.

Jim Burnsed is also among the oldest fishermen still working in the area. “There are some other people, like Philip O’Bannon in Boca Grande—he’s at the top of the totem pole with some other guys whose families have been fishing here for generations—but in Captiva my dad’s the last samurai,” the younger Burnsed adds. 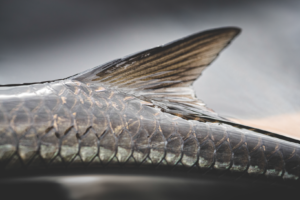 An outgoing tide is usually best, especially during new and full moon phases after an afternoon thunderstorm churns the bay bottom and carries numerous crabs in the current through Boca Grande Pass toward the Gulf of Mexico. Tarpon await head-first in the pass, floating in place to let the current flow edibles their way. “Our clients come to us at the marina and we reach the fishing grounds within five to 20 minutes, depending on where the action is likely to be,” Jimmy says. “We get lots of families, and we really enjoy seeing children of all ages catching their first tarpon.” Not surprising, the Burnseds show up on many Christmas card pictures.

Laura Burnsed, also known by her childhood nickname Dall (pronounced Dowl), says a lot of the team’s success comes down to her husband’s pioneering spirit and the familial approach the team takes in running the business: “The relationships with our clients begin from the first moment I receive a phone call inquiring about charter reservations. We get to know their families—even the children’s names. We all love fishing and love people.” Their location on Captiva, with easy access to the Pine Island Sound and Boca Grande, doesn’t hurt, either.

There’s a good reason this entire subtropical stretch of the coast, from the Ten Thousand Islands to just north of Tampa Bay, is rife with tarpon from April to June. Dr. Philip Stevens, a fish biology specialist for the Florida Fish and Wildlife Research Institute, an arm of the Florida Fish & Wildlife Conservation Commission, explains that the area provides extensive mangrove and marsh habitats for juveniles with a low risk of winter freezes. In spring, Boca Grande becomes one of the most productive tarpon nurseries in the world.

The Boca Grande Area Chamber of Commerce pays homage to its fabulous silver king heritage by sponsoring the World’s Richest Tarpon Tournament, which dates back to the 1980s. Dubbing Boca Grande as the “Tarpon Capital of the World,” the chamber’s live-bait-only tarpon tournament offers a first prize of $100,000. 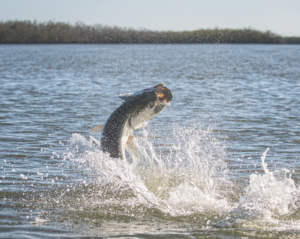 Jimmy Burnsed believes the tony, seasonal population made it possible for an event of this caliber to develop in Boca Grande. “The town not only has the tarpon, but it has the money,” he says. The entry fee runs $5,000 per boat, covering four anglers, and most participants drop another $5,000 on gear and bait. Most also hire a guide, like one of the Burnseds, to captain their team.

A seasoned guide is key for fishing tournaments. Even the most productive waters won’t do an angler much good if they don’t know where to go. Tarpon fishing, in particular, requires additional finesse to land the famously hard-to-hook animal.

The Santiva guys’ scorecard and history in the area makes them attractive captains for the many tournaments that take place. Oftentimes, the men are all hired onto different boats and end up competing against each other. “There have been many instances in which my dad places first and I place second, or vice versa,” Jimmy says.

In 2019, the tournament attracted teams of anglers in 25 boats with 20 silver kings released. But there’s a lot more action that takes place during the two-day event. The tenacious monsters often jump repeatedly and dispel hooks or the lines break off during the strenuous battles.

Then again, if catching tarpon wasn’t such an angling challenge, it wouldn’t be as popular. Due to the coronavirus pandemic, the chamber has canceled this year’s event. But, if proper Centers for Disease Control and Prevention guidelines are followed, there’s no reason why an angler has to miss out on tarpon season. Be-sides Boca Grand Pass, many other fruitful nearby fishing areas include Pine Island Sound and shallower waters in the east of Sanibel Island, Captiva Island, North Captiva Island and in Charlotte Harbor.

Jimmy likes to call tarpon a “blue-collar gamefish” for its accessibility. Unlike other prizefighters like sailfish or marlin, which live in deep water and require a large boat and longer journey out to sea, tarpon are often spotted in depths of four feet or less or when rolling at the surface to gulp air. You can sight-fish for them with a fly, cast out from a small canoe or kayak, or find them in deeper locales on a larger skiff.

Whatever the method, vehicle or venue, no matter if it’s the first or 100th tarpon, the thrill of getting into the ring with one of the world’s great aquatic boxers never tires. And, if you have the Santiva Saltwater Fishing Team in your corner, your odds of winning are that much higher. 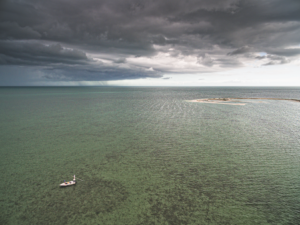