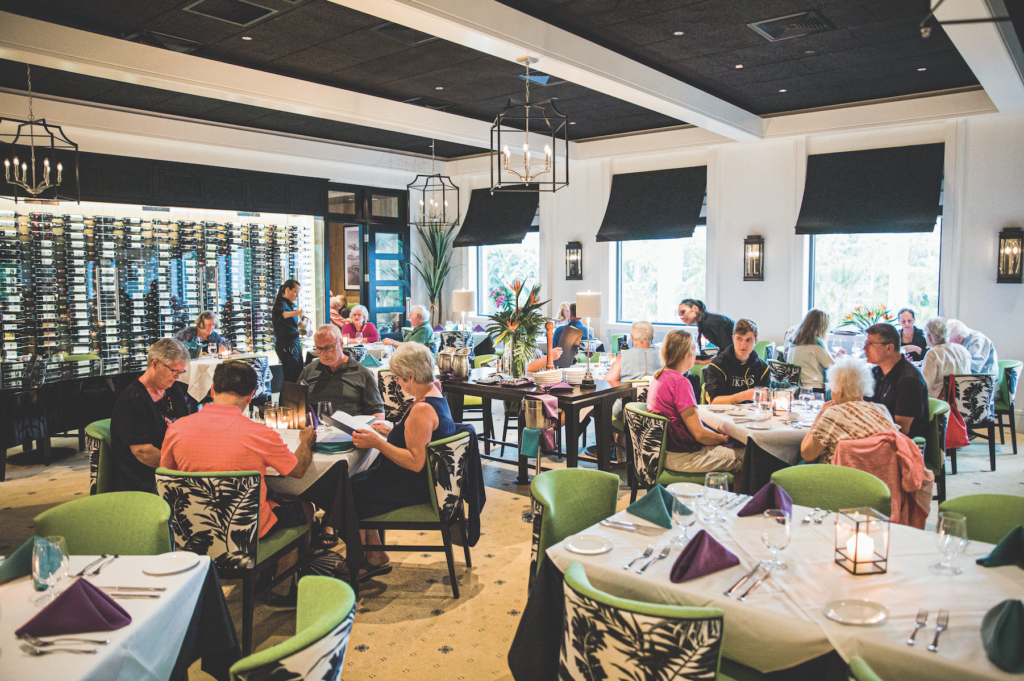 Sanibel’s Cielo dining room is modern, and comfortable, with its tropical-chic decor and a floor-to-ceiling wine wall; Photography by Scott McIntyre

After being closed for six months, the “Il” had disappeared from the sign of the restaurant on Sanibel’s Periwinkle Way, when it reopened in December. I had also read that the former Il Cielo expected to gain 249 square feet of interior space and 12 seats from its extensive renovation. It seemed like a big price to pay—a total gutting and new everything—for extra chairs and losing “the” from its Italian name, which translates to “sky.”

Then I walked in the door, and it all made sense. If Il Cielo had been a stylish showpiece, Cielo is a stunner.

The restaurant first opened in 2011 to great fanfare and gained an appreciative following for its kitchen culture that reaches above the island’s reputation for traditional seafood and tourist-targeted settings. As evidence of its elevated cuisine, the restaurant has hosted three James Beard Foundation events in the past three years.

The makeover takes the much-admired restaurant to another level, with a modernized design, refreshed menu and an expanded bar that exudes heightened character.

When I visited in early January, the couple dozen chairs around the U-shaped bar were filled with islanders happy to have back their favorite upscale haunt. Now improved, and with a flashy new list of fanciful cocktails.

My husband and I ordered the latter two. The inside of the gin drink came wrapped with thin cucumber ribbons and chilled with a single column of ice, while snowball-shaped ice chilled the tequila and rum cocktail.

Although the bar takes up its own space, drinks influence the Cielo dining experience more than ever. One climate-controlled glass-encased wall in the dining room holds tiers of wine bottles, and the restaurant has invested in an Italian wine dispensing system that makes eight prestigious bottles, such as a Tuscan Le Serre Nuove dell’Ornellaia and Napa PlumpJack Reserve Chardonnay, available in 2-, 4-, and 6-ounce pours.

The reconfigured dining room feels uplifted, too, and is divided in three parts: a generously sized main room; an alcove with three high-backed booths, plus a couple of tables; and a smaller dining room with French doors, which can be closed to create a private area.

The separation of the lively bar makes for a quiet dining experience, and the soft classic rock tunes emitting from the shiny baby grand piano now get their due. It’s all quite elegant, with more than a nod to island style: chic lime-green chairs with a black-and-white palm frond pattern on the back, potted foliage and black awnings above each window.

Cielo’s ascension doesn’t end with its good looks, though. Chef Melissa Akin boosted the cuisine after a summer spent investigating global trends and connecting with local farms. “The closing provided a great opportunity for her to expand her wings and thoughts,” says General Manager Marcus Preece.

Early in our visit, servers brought focaccia and citrus-infused olive oil dip and chatted unobtrusively about the new Cielo, suggesting their favorite dishes from a menu that feels just the right size in these times when restaurants seem to go either minimalist or maximalist.

Plucked from the starter selection of a couple of soups, three salads, wagyu meatballs, charcuterie and mussels, we sampled ahi tuna poke and escargot Rockefeller. As rich as the namesake family, the escargot arrived casserole-style, hot and creamy with the medley of traditional flavors—bacon being the most pronounced, cheese and spinach playing backup. The marinated tuna dice rested on fried wontons with bits of avocado and a creamy sesame vinaigrette that balanced nicely.

Among the four seafood entrees, we ordered the restaurant’s signature jumbo scallops dish, which gets a complex flavor punch from a dusting of fennel and salty-sweet pancetta jam woven with strands of red onion. Our other order, the veal scaloppini Marsala, reflected the kitchen’s Italian inflections. Its pan-seared disks of ricotta, referred to as “ricotta dumplings,” brought a twist and dimension to what could otherwise be an unremarkable dish.

Service was well-paced and unhurried, allowing us time to enjoy the piano music and fine details, like real candles, stylized flatware, soothing seascape art and the refined architectural elements. These all set the stage for a leisurely meal that bears lingering over with after-dinner drinks or, as we decided upon, the adult sundae. Studded with crunchy pecan brittle and pieces of brownie, its “adult” quotient comes from squiggles of bourbon caramel and one standout brandied cherry.

The menu and name changes at Cielo may be subtle, but the physical makeover leaves no doubt that a summer without it was worth the wait.