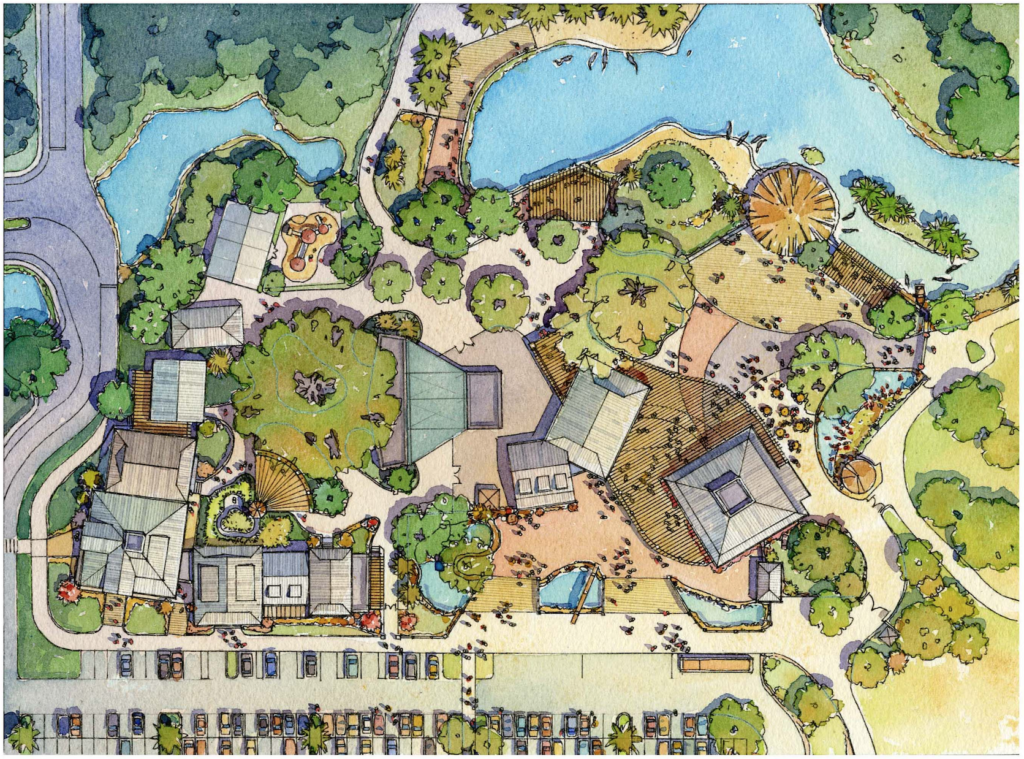 Over the last 100 years, Naples Zoo at Caribbean Gardens has grown to its current 43-acre footprint. As part of its $25 million capital campaign, the zoo recently introduced the Glass Animal Hospital and Smith Animal Commissary. Now, the team is working on the renovation and expansion of the entrance and welcome center, along with new education and volunteer centers, all of which will be housed in Old Florida-style buildings.

Tim Tetzlaff, director of conservation at Naples Zoo at Caribbean Gardens, recalls earlier days at the zoo as a young kid when his father, Larry—better known to many as Jungle Larry—would give impromptu walking tours for guests when the zoo’s three trams were at capacity. People would follow the 6-foot-6-inch tall Larry on foot as he moved between exhibits, identifying animals and recounting stories of his travels through the wilderness of Australia, Africa and South America.

Although the walking tours usually lasted three times as long as the tram tours, Tetzlaff recalls that people always stayed until the end. “He truly delighted in being with people and welcoming them into his wild world where jungles weren’t just movie backdrops, but real, fascinating places with extraordinary creatures and unusual plants that were all part of our common heritage,” Tetzlaff explains. “Spending time with him brought guests closer to those places.”

Locals’ fascination with the zoo hasn’t waned over the last 50 years, and that has a lot to do with Larry and his wife, Nancy, also known as Safari Jane. Their decision to run the zoo as an experience first, and a business second, still draws generations of people whose fond memories of early visits drive their commitment to funding its growth and preserving its mission of conservation.

Just last November, the 43-acre zoo debuted its Glass Animal Hospital and Smith Animal Commissary, and recently the team started work on its new entrance and welcome center. All of this is part of a $25 million capital campaign, proof of the zoo’s lasting commitment to education and conservation.

Even before the Tetzlaffs, there was Dr. Henry Nehrling, a celebrated naturalist from Central Florida, who bought the property in 1919 as a place to keep his tropical plants through winter. By the end of his life, he’d turned the previously empty lot into a full-fledged botanical garden with more than 3,000 plant species.

After more than 20 years of the gardens lying dormant, Julius Fleischmann—of the Fleischmann Yeast empire—acquired the land in 1951 and rejuvenated the gardens, adding trails (most of which remain the same to this day), new plantings and animals.

The garden’s prominence was starting to grow when Larry and Nancy visited in 1967.

The couple leased the property in 1969 and built onto the new Caribbean Gardens, raising fences and concrete buildings as a haven for their collection of wild animals they’d acquired on their travels through the world.

Jungle Larry and Safari Jane had already made a name for themselves through their appearances on the children’s television series The Captain Penny Show and with their charismatic school assemblies in which they shared footage from their trips to South America and Africa with students in their native Ohio. They replicated this model at Caribbean Gardens.

As the zoo grew throughout the 1970s and ’80s, the animal presentations became more circus-like, with chimpanzees wearing clothes and the animals performing tricks. The Tetzlaffs started to feel that the experience was veering from the original mission. “The tricks were to highlight the natural abilities of those animals,” Tetzlaff explains. “It wasn’t lining up with where our heart is and what we want people to appreciate.”

They established the Safari Canyon open-air theater in the 1990s. On mounted TVs, they’d screen videos of animals in their natural habitats, before bringing out the live dingoes, leopards, ocelots, macaws, eastern diamondback rattlesnakes and a host of other fascinating animals for guests to meet.

With the interactive programming, Naples Zoo’s attendance increased 146% between 1994 and 2019. Their accreditation as part of the Association of Zoos and Aquariums (AZA)—a seal only held by 240 institutions worldwide, including places like Bronx Zoo and Monterey Aquarium—came in 2001.

But it wasn’t all smooth sailing in the early aughts. Between 2002 and 2004, the Tetzlaffs fought to save the land that the zoo was sitting on. The fate of the zoo found favor with Collier County residents—73% of whom voted for the zoo to be purchased for public ownership.

Over the years, the zoo became not just a cultural attraction for families but a prominent factor in the social scene. Current CEO Jack Mulvena came on board in 2013 with fresh ideas to stir up a new wave of support. He introduced a more laid-back, festive format for the previously existing Feasts with the Beasts Fundraiser, turning it into ZOObilee, an event in which people stroll the grounds after-hours, sampling food and beer from area restaurants.

Then, Zoo Gala came about in 2018. First known as the Black and White Ball, the gala was the brainchild of Terry Edwards and Jody Lippes. The friends, both equipped with substantial experience chairing other events in town, fell in love with the zoo and its many conservation programs, but felt it needed a broader patron base if it was to continue growing. The two decided a formal, tented affair on-site would allow prospective patrons to experience the zoo’s efforts firsthand.

After a groundbreaking first year, the zoo decided to go annual with the event. Last November’s gala raised $1.3 million, tipping the scales to $21 million of the capital campaign’s $25 million goal.

Last fall, the zoo debuted its animal hospital. As an AZA accreditation requirement, the on-site hospital was part of Mulvena’s initial master plan. The nearly 10,000-square-foot facility—designed and built by GATES Construction—is a big step up from the garage-sized “vet-shed” previously used. It’s complete with a surgical suite, hospitalization rooms, diagnostic labs, a pharmacy and a holding area for animals in the event of a hurricane.

Next up on the zoo’s continued expansion is the new welcome center, volunteer headquarters and education center, which will all replace the current ticket building and gift shop. Old Florida-style buildings will house the new centers, while giving a nod to local heritage with the historic-inspired design. Mulvena calls the education center the “centerpiece” of the expansion, noting that it will quadruple the number of kids who can participate in the programs.

Landscape architect Ellin Goetz is charged with redesigning the entrance’s grounds—a major feat for an institution that celebrated 100 years as a botanical garden last year. The zoo’s historic plant collection is paramount in the plans. Goetz plans to incorporate a variety of shade trees and a combination of native and non-native vegetation, water lilies and tropical flowering vines, to represent the local and international plant and wildlife species preserved at the zoo for decades. She says: “We’re going to respect and tell the story in the landscape of the native Florida coastal habitat we sit in.” 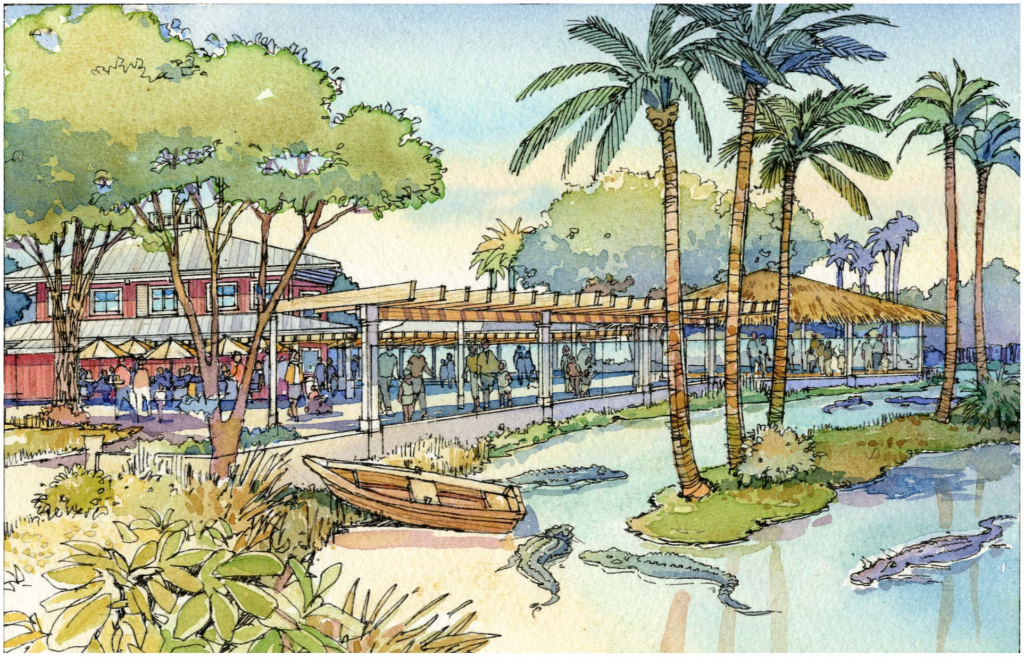 Photography and renderings courtesy of Naples Zoo at Caribbean Gardens