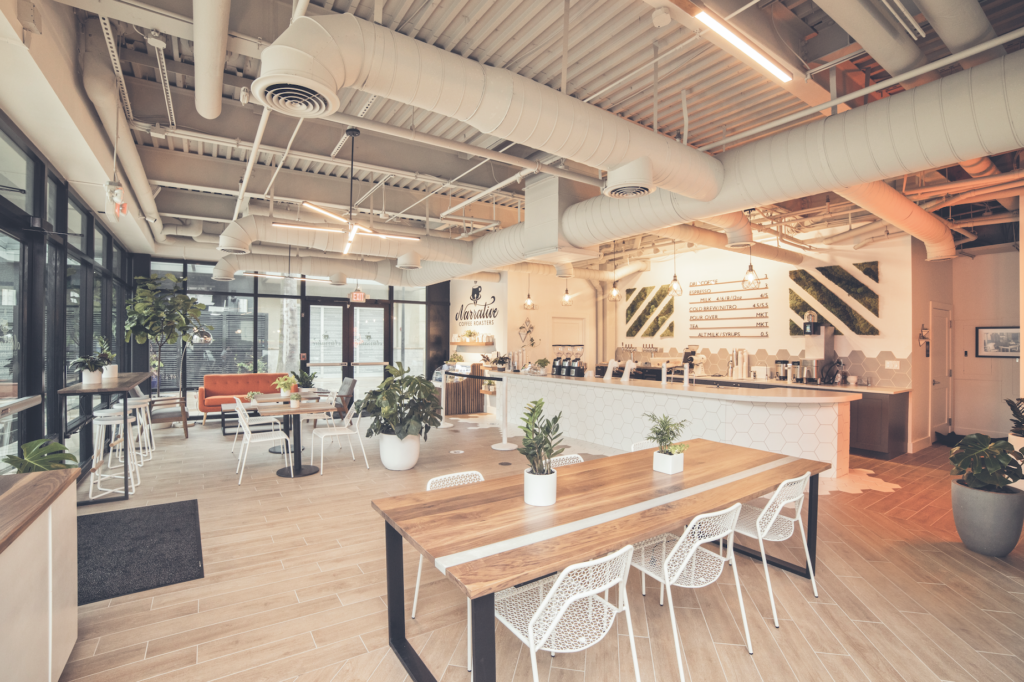 At Narrative Coffee Rosters in Mercato in North Naples, there’s a heavy emphasis on the story of the coffee and the flavor profile of the brew. The customer experience is key, along with having complete transparency on the coffee’s origin. Top, right: Co-owner Caleb MacPherson.

Java lovers have identified a third wave of coffee shops, since sipping coffee has gone from being a utilitarian pursuit to an art. This third wave crests with indie coffeehouses that remold the concept with technology, craftsmanship and thinking outside the cup.

Plenty of brew news has hit our streets lately, thanks to independent coffee purveyors like Shift Coffee Bar, with its roving carts in Fort Myers and jugs of oat milk mocha lattes, or Narrative Coffee Roasters, which recently went from a pop-up format to a brick-and-mortar. Here, we look at three places changing the caffeine game in Southwest Florida. 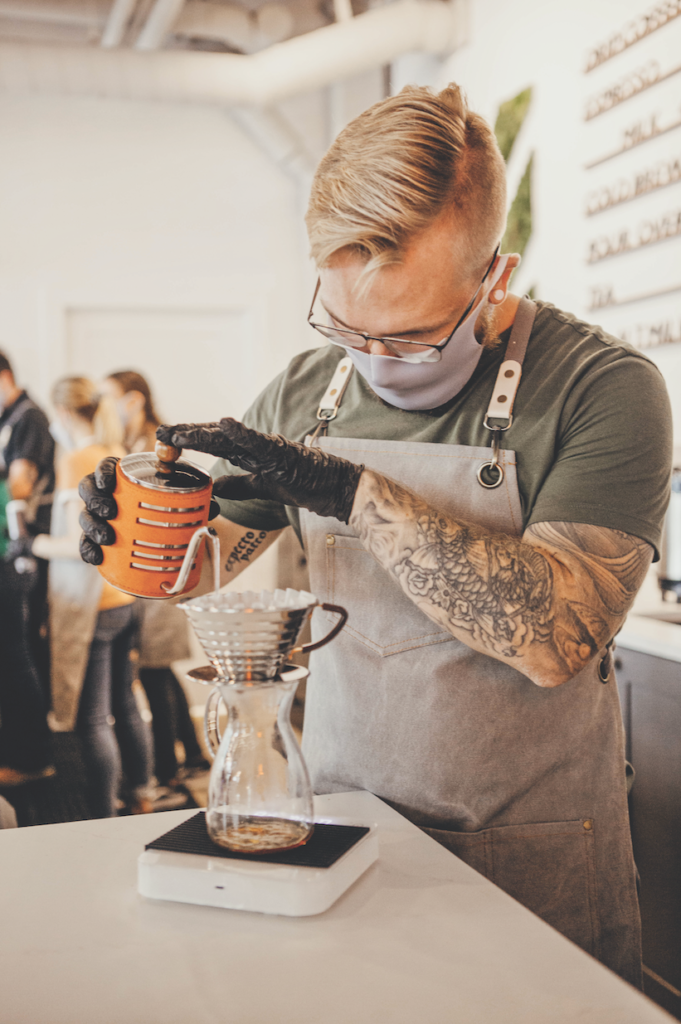 Caleb MacPherson, co-owner of Narrative Coffee Roasters, believes he and partner, William Diaz-Garcia, stand at the rise of fourth-wave coffeehouses. “Heavy emphasis is on the story of the coffee—thus the name ‘Narrative’—and its flavor profile,” he says. A self-confessed “coffee nerd,” he started Narrative as a coffee roaster in his garage in Cape Coral three years ago, then expanded to a lab facility nearby, and in June opened an industrial-chic shop in Mercato.

Diaz-Garcia, the fifth generation in his family to be involved in the coffee supply chain, joined the operation early in 2019. “The brick-and-mortar coffee shop is all about the customer experience,” he says. His face lights up talking about their Cyclops, a brewing system that relies on a vacuum pump to dry the grounds and then steep them several times before blending the final drink. Narrative’s is said to be the first one in the state.

He points to the white marble coffee bar, the focal point of a spacious, sleek, windowed space with black-and-white design and outdoor patio tables. “We intentionally eliminated big machinery to bring the customer into the coffee experience,” he says. Instead, the hot beverages issue from tap-like fittings, where customers can watch and interact.

“We’ve also increased the level of transparency when it comes to the coffee farmers,” MacPherson says. The two work with ethical importers to find single-origin beans and pay hefty premiums to the farmers. Black-and-white photographs hang on the wall in homage to growers from Costa Rica to Ethiopia. MacPherson’s and Diaz-Garcia’s part of the story begins with the beans they roast fresh daily.  “We’re able to share that narrative from bean to end,” Diaz-Garcia says.

As much as Narrative is techy, Downtown Coffee and Wine Company is just that homey. The building occupies a sliver of a space at the corner of Old 41 and Abernathy Street in downtown Bonita Springs, with counter service and a couple of small tables inside. Most of the scene happens on the patio among potted plants and a mural, under bistro lights and with a view of the historic cottage’s picket fence across the street. Craft coffees from Black Tulip, scratch-made flavorings and milk offerings from goat to oatmeal set the brew standard.

“You’re not going to be sitting alone on your laptop here,” says Caitlin Emery-Schewe, who opened the shop in August 2019 with her husband, Brandon Schewe. “You are forced to be social. It’s not a place to separate from the world.” To broaden the social aspect and lengthen their hours, they decided to bring select, rotating wines into the business plan, based on Caitlin’s bartending experience at The Capital Grille and Roy’s Bonita Springs, where she worked closely with sommeliers. Brandon, who worked in the kitchens at The French, Osteria Tulia, Baleen and other fine restaurants, wanted to offer elevated food sourced locally. “Anytime Fare,” as the menu states, includes smashed avocado toast, chia pudding, turkey club with espresso mayo, and pastries from plant-based Green Bites bakery.

“There was a line out the door the first day,” Caitlin says. Sharing the revitalized neighborhood with the firehouse, library and local businesses brings the coffee crowd; live music and wine events keeps things lively at night. “Everyday workers, nurses, all different walks of life come here,” Brandon, who grew up in the area, says. “It’s not about us, it’s about the community.”

“When I went to college in Asheville, just that act of holding a coffee mug made me feel less homesick,” says Stephanie Bunnett, who operates Kunjani with her mother, Nicola, and an all-woman team. “It felt safe, like home.” That’s what Bunnett hoped to create in North Naples–a safe place for coffee, conversation, connection and conscientious commerce. She’s achieved that vision with sustainably sourced coffee, house-roasted beans resulting in zero emissions and a comfy living room setting. Her mother, who has experience in Naples galleries and who fled political strife in Zimbabwe with her then 16-year-old daughter, had visions of a fair-trade gallery to help African women. 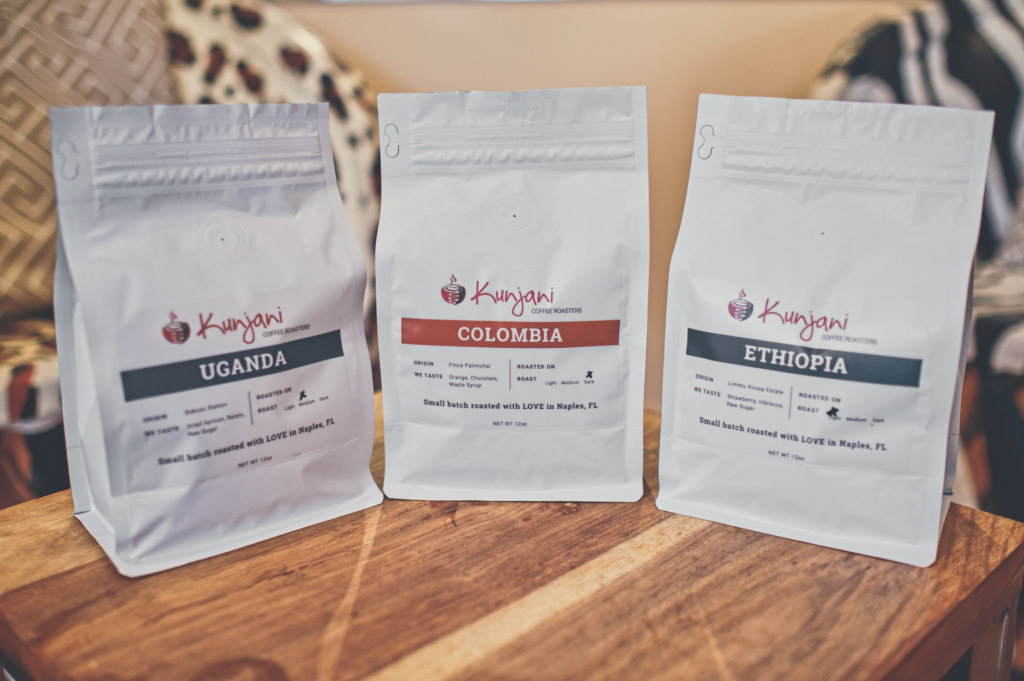 Hence, the duo opened Kunjani—named for a greeting in the Zulu and Xhosa languages—in 2016 to “bring back the cup to the people,” Stephanie, a former Starbucks employee, says. The connection is global, with a mission to economically empower artisans and growers through programs such as Tip the Farmer, where farmers receive a percentage of patrons’ tabs and any added designated tips for online beans purchases. The small retail area also stocks wildlife paintings, baby toys and handmade linens—all of which fight poverty through direct trade with its producers.

The various missions do not detract from the quality of the coffee experience, either. Beans are of single-source origin and roasted in small batches. “Freshness, grind, weight, temperature and time all play an important part in the flavors extracted during the brewing processes, and so it is important for us to be vigilant in all of these aspects,” Bunnett says. 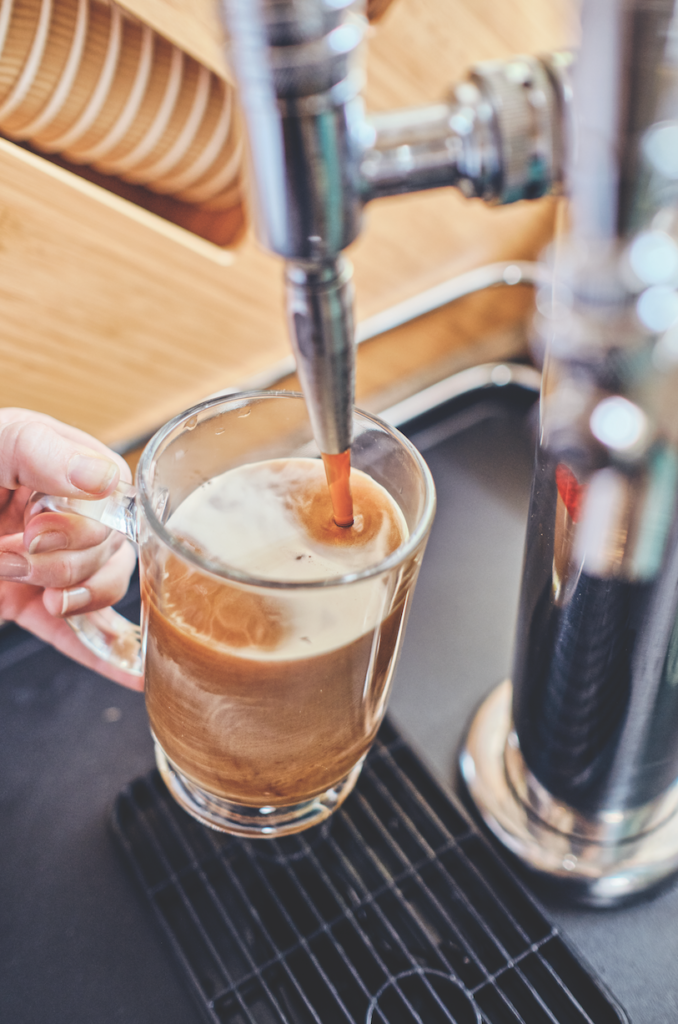