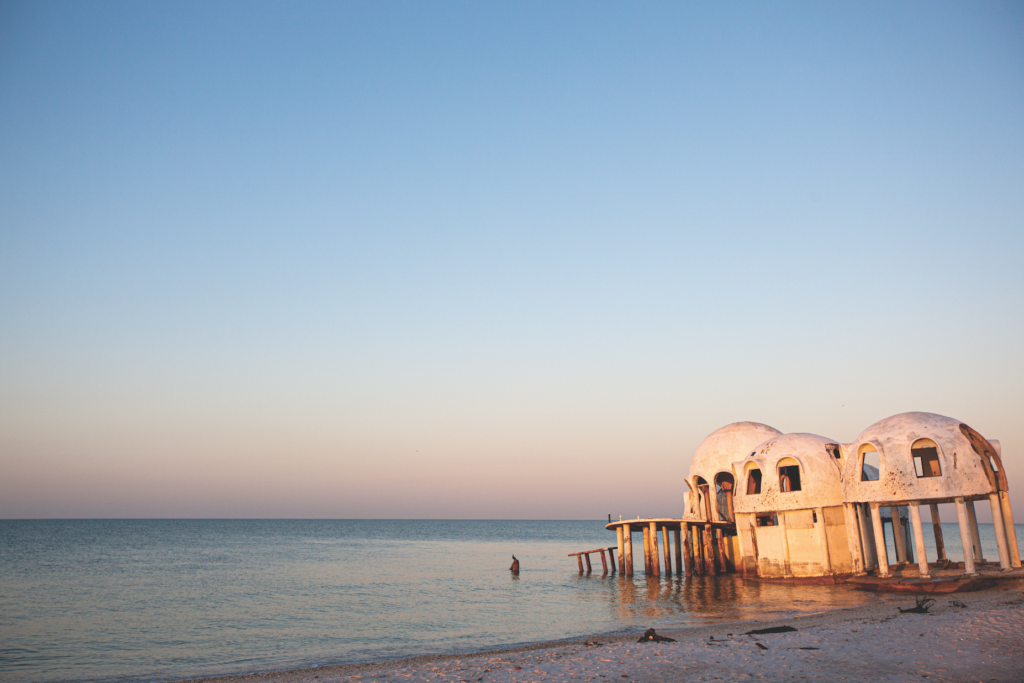 Rising from the turquoise waters of the Gulf of Mexico are a set of gleaming white domes. They’re far enough from the nearby island to look as if, one day, they simply stood on their supporting pillars and took a stroll into the water and stayed.

The Cape Romano dome home inspires artists, storytellers and curious travelers. It’s become a tourist destination, a fishing hotspot and an iconic part of the Southwest Florida landscape. The domes weren’t built by aliens, as a few imaginative storytellers have proposed, nor were they guarded by armed settlers. Instead, the six-dome home was the realized dream of a retired independent oil producer from Tennessee with a passion for invention and the perseverance to bring his vision of sustainable living to fruition.

Bob Lee began purchasing lots on Cape Romano Island in 1978. Around the same time, he was working on a prototype for a self-sufficient home on his property in Gatlinburg, Tennessee. “He was always building something,” his daughter Janet Lee Maples explains. She watched her father construct giant steel forms that served as a mold for the Tennessee domes prior to their transport to Cape Romano. Lee purchased a barge to ferry all of the needed supplies to the island when the build started in 1980. 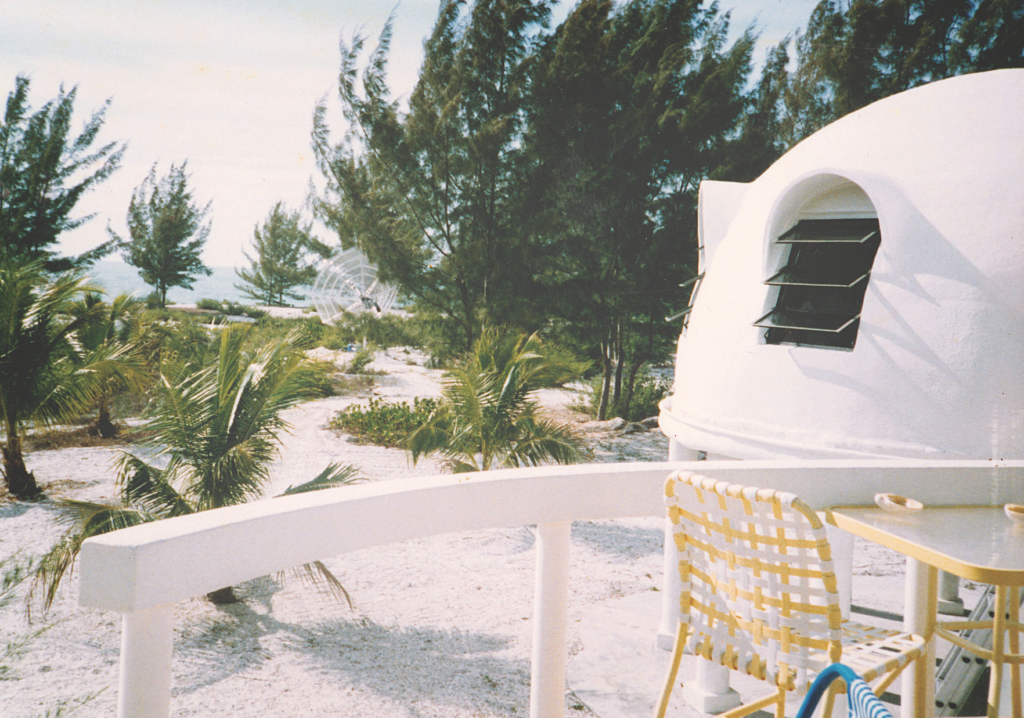 The home’s famous dome shape was designed to work with, not against, Mother Nature. The rounded domes had no corners for the wind to grab, making them as hurricane-resistant as possible and, when it rained, water would run down the domes into
a gutter system that filled a 23,000- gallon cistern under the center dome to supply the house with fresh water. The cement used to form the six domes was crafted using sand from Cape Romano mixed with fresh water. Once completed, the 2,400-square-foot house was self-sustaining, featuring solar panels, back-up generators, hot water, air conditioning, ceiling fans, a refrigerator, satellite dish, hot tub, gas barbecue and two lighted wooden walkways that led to a lagoon on one side and the ocean on the other.

The Lees sold their vacation home in 1984, but took possession of it again in 1987 when the owner encountered some financial difficulties. After renovations, the Lee family returned to the domes. During her time living on the island in the early 1990s, Maples’ favorite spot was the front patio. “I can remember sitting out there with dad, the wind in the trees, watching boats. It was really beautiful,” she says. She also enjoyed walking down the long path to get to the beach, which stretched much further than it does today.

The island eroded naturally over the years, helped along by strong storms including Hurricane Andrew. The dome home only sustained minor damage from Andrew in the form of blown-out windows, but the landscape of the island was changing and Lee took note–a seawall was needed to prevent the continued erosion of the beach. Mother Nature was creeping in and, as the years passed, so were the regulations that would prevent such a seawall from being erected along the shore.

In 2005, the John Tosto family, of Naples, came into possession of the home and thus began years of battles between the family, the Department of Environmental Protection and Collier County Code Enforcement. Fines piled up as the beach retreated and the domes appeared to slowly creep toward the ocean.

Photographer Mila Bridger was passing Cape Romano on a friend’s boat the first time she saw the domes rising from the shore. She grabbed her camera, and the photo she took sparked an obsession. “It is such a unique architecture, and I knew there had to be a story,” she says. “I wanted to find out what they looked like in their prime.” Bridger started a Facebook page, Cape Romano, asking people to share photos of the domes. Two years later, Maples reached out to her. Bridger connected Maples to local journalist Natalie Storm, who published the first history of the Cape Romano dome home in the Coastal Breeze News in 2012. Maples shared photos with Bridger, who painstakingly scanned each one to create a digital library for the domes, which she then shared on the Cape Romano Facebook page.

By 2014, the six domes were in the water, the beach continuing to erode behind them. Bridger swam around each of the domes with her GoPro. “People thought I was crazy,” she recalls. “I tried to climb in and see what was there.” As technology advanced, more adventurers shared their photos, aerial footage and videos on the Facebook page, creating a timeline that showed the domes continuing their slow stroll into the Gulf. In September 2017, Hurricane Irma made landfall first in Marco Island. When the storm clouds cleared, curious fans of the home found that two of the domes had succumbed to the storm and slipped under the sea.

Today the remaining four domes stand approximately 300 feet offshore, making them part of Rookery Bay Aquatic Preserve. While the structures are still privately owned, the land belongs to the state. Their future, however, is still unknown. While the domes still stand, you can book a tour of the seascape around them. Lee’s daughter, Janet Lee Maples hopes that the remaining domes can sink into the ocean and provide habitat for coastal sea life. For Bridger, the dome home remains a source of inspiration and subject of her photography. “They are my favorite landscape,” she says. “They are so unique and original and completely different from anything here.”