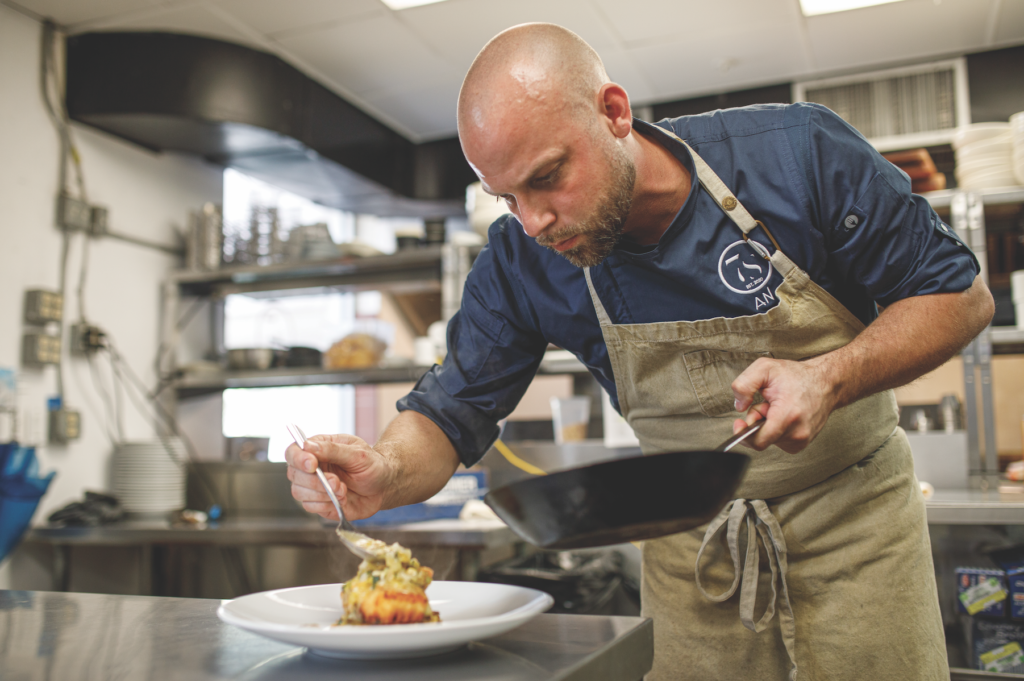 One of the most exciting restaurants to debut amid the COVID-19 pandemic, Seventh South Craft Food + Drink in Naples is led by chef Adam Nardis (above) and bartender Barry Larkin. (Photography by Brian Tietz)

Two blocks away from Fifth Avenue South, the new Seventh South Craft Food + Drink is a short walk from the downtown action, but a languid evening on its bougainvillea-bordered patio can feel like a world away.

The owners are a pair of industry friends: Adam Nardis, who had been the executive chef at M Waterfront Grille for eight years, and Barry Larkin, who most recently was the bar manager at the restaurant that directly preceded theirs in the same location, 7th Avenue Social. The two met through Nardis’ wife, Erin, when she and Larkin helped open The Continental’s bar in 2014. 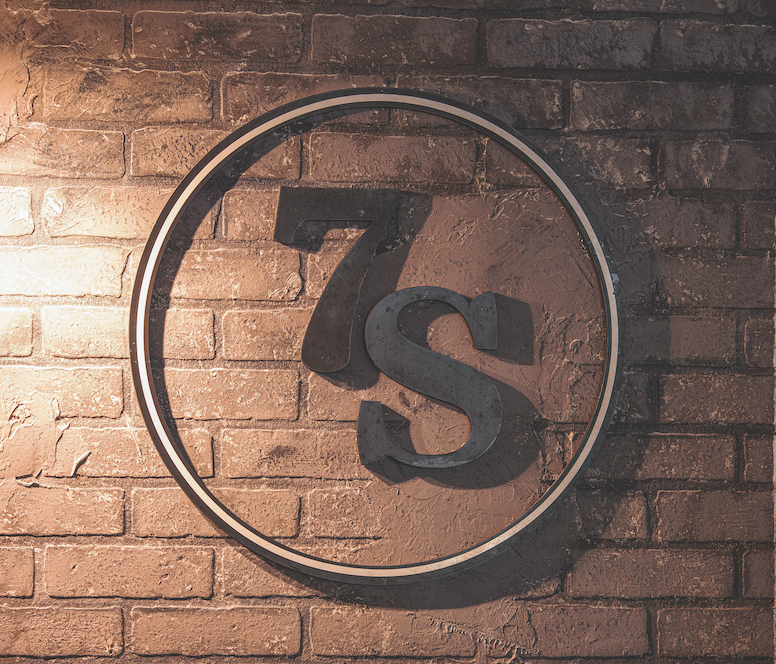 They were drawn to the space because of the location, which is the first element of its name; the second half is a nod to their mission, and their efforts to bring out the best in each other. The executive chef and bartender teamed up to have the kitchen and bar work in tandem to put an equal emphasis on quality, made-from-scratch cuisine and cocktails. “There are collaborations of kitchen and bar, chef and bar manager, all over bigger cities. It doesn’t then become so front-of-the-house and back-of-the-house. We wanted to idea-share—that’s the main concept of this restaurant,” Nardis says.

Nardis and Larkin aren’t the type to take themselves too seriously; the two  aim for whimsy in what they do. But, “damn, do we focus when we’re making something for a customer,” Nardis says.

They put in a lot of sweat equity over the summer to transform the space, laying bricks to extend the patio area, designing and installing wood wall panels for the interior and sourcing art and furniture that reflect a traditional American brasserie with a modern touch. The food and the drinks came together organically, some inspired by the local ingredients available, such as day-boat fish. What’s reeled in that morning ends up on your plate, served, depending on the season, with perhaps a piquant romesco sauce or a seven-herb pesto. Inspiration also comes from the herb and lettuce garden Colusa Farms helped them install at the restaurant.

The story of how the pair decided to plunge headfirst into restaurant ownership in the middle of  a once-in-a-century pandemic is as much a tale of the interconnectedness of the local dining scene as it is of anything else. You could call it luck, fate or crazy coincidence, but the advent of COVID-19 arguably helped Larkin and Nardis embark on this journey. The two had been on the same trajectory: Each had for years wanted to open his own restaurant. Nardis, who was mentored by Chris and Peter Sereno of M Waterfront Grille since 2005, had been looking at properties for the better part of a decade. Larkin, who dove deep into the world of bespoke cocktailing as the bar manager at The Continental, left there about two years ago. At his interview for the job at 7th Avenue Social, Larkin says he looked its owner Jerry Alajajian in the eye and said, “In two years, I want to own my own restaurant.” Alajajian answered back, “I hope I can help you do that.”

Fast-forward to the pandemic, and Alajajian closed 7th Avenue Social with the intention of reopening in October (he also owns Hogfish Harry’s, another restaurant that opened in 2020 to rave reviews, and Island Gypsy Cafe & Marina Bar). Sensing opportunity amid the global chaos, Larkin called Nardis and asked if he wanted to open a restaurant with him. Oddly enough, Nardis’ wife had a dream a month before that the two had started a restaurant together. He naturally said yes.  Larkin met with Alajajian on July 5 and asked if he’d sell them 7th Avenue Social.  Later that week, the three were meeting to discuss the deal.

Knowing what it takes to open and how important it is to launch before November to catch the start of the season, Larkin and Nardis plowed forward, picking a name, designing a logo and writing recipes before the ink was even on the paper. They signed the deal Aug. 30, and the rest was history—the pair met their internal deadline by welcoming their first guests Oct. 13. “People would ask me if it was borderline cocky to open a restaurant in COVID, and I’d say ‘Yes, but we saw it as an opportunity,’” Nardis explains. “Usually there are 30 restaurants that open every season, and this year there are six.” In a way, the pandemic provided a fortuitous moment to enter the competitive Naples market.

Another unintended, but happy, consequence has been fewer crowds at the beginning, a make-or-break period for a restaurant. “COVID has extended the honeymoon period for us—we were fortunate that it was slower,” Larkin says, noting it helped them find their groove and perfect their consistency.

Ambitious by any yardstick, Larkin and Nardis set Seventh South’s hours to be round-the-clock. They’re doing lunch and dinner service daily, plus weekend brunch and late-night dining. You can order truffle butter-crumb-and Gruyere-dusted oysters or crisp fritters dripping with melted goat cheese and blood orange-pecan marmalade into the wee hours because, as they note, almost nowhere else is offering it.

Because the duo is dedicated to changing their menus regularly, what may have stunned in February won’t be available now. “You’re not going to see asparagus in October or butternut squash in April. Four seasons, four menus. That’s my structure,” Nardis says.

Take the bread pudding on the opening menu, for example. It started as a pumpkin bread pudding that has since morphed into a peach cobbler flavored one topped with housemade Cinnamon Toast Crunch ice cream. One dish that’s not going anywhere, however, is the ahi egg roll starter that Larkin calls the best appetizer he’s ever had (the deep-fried tuna melts into a cashew-and-daikon slaw that’s kicked up with dueling zesty sauces). He and Nardis also decided the pastas have to stay. Both of them have Italian ancestry and won’t settle for anything less than the highest grade Caputo semolina flour, which Nardis says gives the noodles their signature al dente spring (not cooking duration, as commonly held).

Larkin’s bar book is filled with detailed notes on every cocktail they’ve ever served. It’s tucked behind the bar, should a patron come in wanting a drink sampled months beforehand. The Iceberg Theory was one of Seventh South’s first bestsellers, named after Ernest Hemingway’s revolutionary writing style and a play on his favorite drink, the daiquiri. It uses Codigo blanco tequila with fresh-squeezed grapefruit and lime juice, and a kiss of lemongrass and basil. All of Larkin’s drinks incorporate top-class spirits with housemade infusions, syrups and bitters. Everything is fresh.

A cornerstone of the epicurean experience that they’re hoping to amplify is the Craft Counter. Physically at the mid-point in the restaurant between the bar and the dining room, the long high-top sitting under pendant lights occupies a symbolic space for their version of a chef (and bartender) table experience. For a fixed price, four courses, each paired with four cocktails or wine, are brought out. Then Larkin and Nardis narrate the story behind each pairing for an injection of entertainment. Nardis’ goal for the restaurant is to have a couple look at each other while leaving and say, “Well, that was fun.”

And he’s nailed it. The place has that familial, welcoming feel you get at someone’s home. That’s in part because all the staffers are friends. Every server and manager seems motivated to make each guest feel well cared for, too. It’s a testament to the culture Nardis and Larkin have fostered by picking people who were intertwined from years of working together at various local restaurants. “It’s so nice to see that these servers are loyal and they followed us here,” Larkin says. “People just don’t jump into a new restaurant. But they had confidence in what we were putting out there. It’s very humbling.” As the accolades keep coming in—which they no doubt will—that humility and gratitude will continue to serve their team and their visitors well.