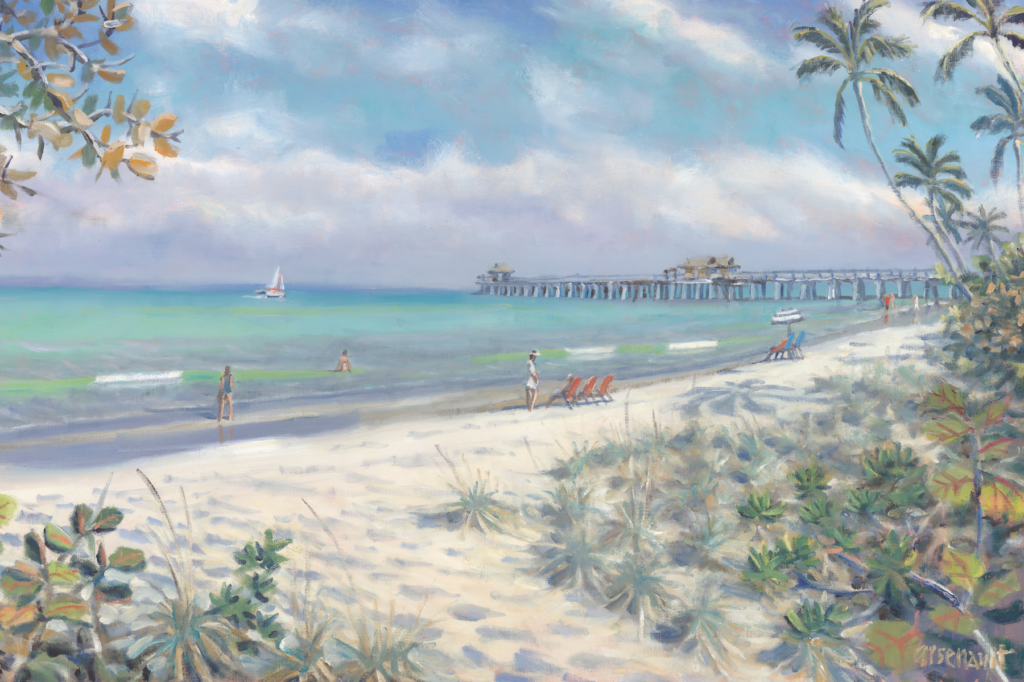 When it opened, the Naples Pier provided the only way in and out of town. It has long served as inspiration for artists, including Paul Arsenault, whose Naples Pier and Beach painting is seen above. (Courtesy Paul Arsenault/Arsenault Studio & Banyan Arts Gallery)

From morning coffee meetups to evening attempts to capture the elusive green flash at sunset, the Naples Pier is a gathering place for tourists, fishermen, sunbathers and residents. For more than 130 years, the landmark has served as a symbol of Naples in advertisements, postcards and paintings.

Walking the pier is a favorite evening activity for artist Paul Arsenault and his wife, Eileen. “It’s a special part of our quality of life in Old Naples,” he says. Arsenault has painted the pier for decades, in part as a way to give people a sense of geography. “You want to know where you are on the beach, and just the silhouette of the pier locks you right in place,” he says.

The pier debuted in 1888, providing access the next year to the newly opened Naples Hotel, where the first guest was Rose Elizabeth Cleveland, sister of President Grover Cleveland. The 600-foot, T-shaped wooden pier welcomed passengers and freights brought to Naples by boat and was the only way in and out of town until the arrival of the first passenger trains in the 1920s and the completion of  Tamiami Trail in 1928.

By 1910, freight lifts were added to the pier, along with a bathhouse and changing room. The new additions joined the post office, which was located at the end of the pier until it was destroyed by fire in 1922. This resulted in the second repair for the pier; the first was in 1910 after extensive hurricane damage. It was completely rebuilt after hurricanes in 1926 and 1944—the latter marked the pier’s shift from function to recreation. “It’s always been a gathering place here, and a lifeline,” John Telischak, education manager for the Naples Historical Society, says.

One of Telischak’s favorite pieces of pier history is the sunset dances he was told were held at the end of the pier in the 1920s. Guests from the hotel would trek down to the end of 12th Avenue South in their evening finery and tiptoe over the day’s fishing remnants to reach the Victrola record player and the dance floor. “They put signs up that said, ‘Please don’t throw your fish on the dance floor,’” he says.

It was the rise of bathing culture and road trip vacations that brought more tourists and residents to the area in the early 1950s. Around this time, another natural disaster was looming; and when Hurricane Donna hit in 1960, the pier was destroyed by the 135 mile-per-hour winds and almost 10 feet of storm surge. City council’s decision to drop the pier’s insurance policy before the storm left the rebuilding project in dire need of money.

Lester Norris, a cartoonist-turned-retired CEO of the Texas Oil Company (Texaco), pledged $70,000 to rebuild; by the end of the project, the donation was significantly higher. Norris and his wife, Dellora, were well-known philanthropists, having previously donated toward the development of Lowdermilk Park, and insisted that, in exchange for their donation, Naples City Council drop its plans for a proposed utility tax. The result was a rebuilt pier, featuring a new design to better withstand storms. It also gave the structure its current recognizable silhouette.

Through the years, the Naples Pier has been the site of beach weddings, memorials, baptisms, Easter sunrise services and Fourth of July fireworks. “It has a charming, Old Florida feel to it,” Arsenault says. “It’s our Eiffel Tower.”

Arsenault and Telischak see a similar future for the pier as a strong piece of local identity. “When people come here, they go to 3rd Street and 5th Avenue, and go to the pier at sunset to watch the sun go down, or go fishing or swim,” Telischak says. “My hope is that it will be the same 100 years from now.” 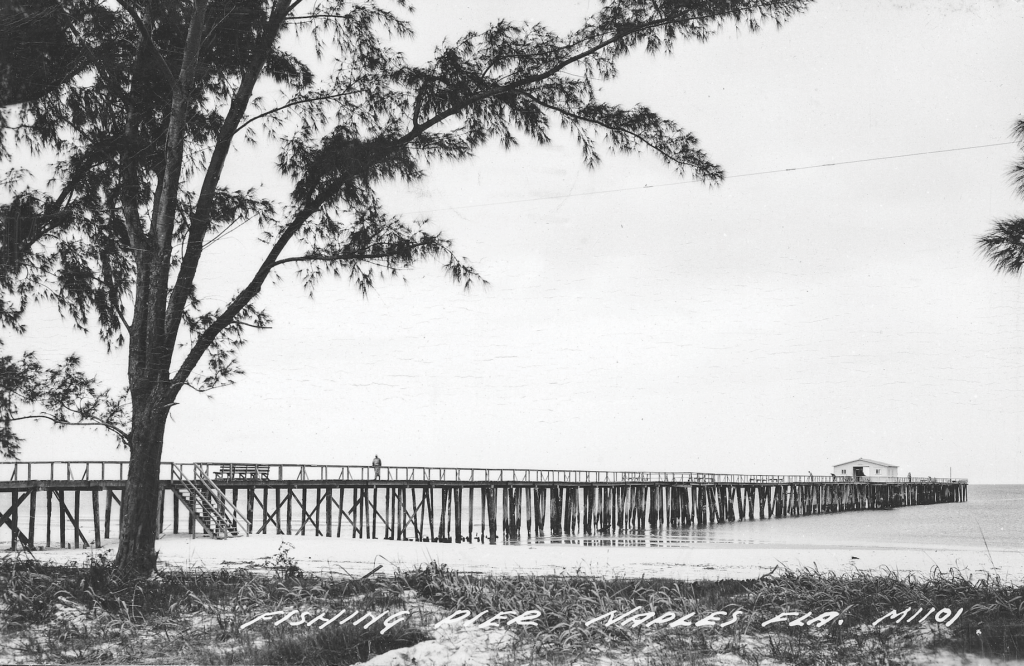