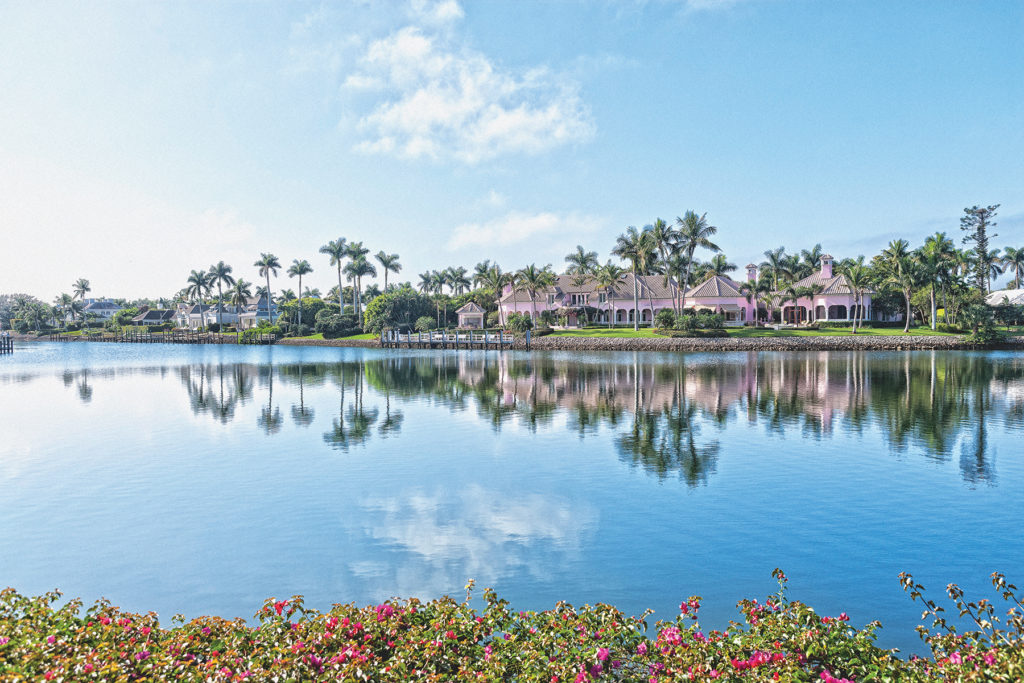 Carved out of swampland nearly a century ago, Port Royal maintains its original designation as a luxury community and is home to CEOs, celebrities and A-list creatives. (Getty Image)

If you’ve ever wondered how the other half lives, a leisurely drive or bike ride through the Port Royal neighborhood in Naples will enlighten you. Think towering royal palms, expertly manicured grounds and mansions that are part-time homes for some of the wealthiest people on the planet. The area saw a home sell recently for $48 million,  only to be torn down in order to build a newer, larger mansion. Such is life in Port Royal, home to captains of industry and hedge fund directors. A slow ride through this area sweeps you away to a whole other world.

The area known as “Old Naples” does not have a precise geographic definition. Instead, it covers the whole charming area nestled west of U.S. 41, between Seventh Avenue North and 14th Avenue South. Basically, if you find yourself immersed among a picturesque combination of old beach cottages and mansions resting peacefully among hundreds of tall coconut palms and banyan trees, with a couple cobblestoned shopping districts between, chances are pretty good that you’ve found it. It’s one of the most desirable neighborhoods in Southwest Florida, thanks to its proximity to the beach, as well as the world-class shopping and dining on Third Street South and Fifth Avenue South. The Naples Pier also juts out from this area, offering one of the best locales to find yourself at sunset.

Downtown Bonita Springs feels like you’re taking a step back in time, and still hasn’t lost its small town feel despite the recent development. The area is dotted with public sculptures and murals, like Alejandro Nuñez’s My Beautiful Town on the north wall of Benson’s Grocery. Guided tours show off the neighborhood’s history, highlighting landmarks like the artist cottages, renovated fishing cabins built on the edge of the Imperial River in Riverside Park in the 1940s. Take a peek in the cottages, where you’ll find handmade jewelry, paintings and sculptures. Riverside Park, in the heart of downtown, off Old 41, is also one of the city’s main gathering grounds, where families come to picnic; kayakers embark on paddling trips; and where you’ll find movies, live music and annual arts, beer and food festivals.

Downtown Fort Myers River District is a nod to Old Florida with its string of low-rise buildings built during the early 20th century boom. Stroll along the brick-paved streets and admire the Beaux Arts and Neoclassical buildings that now house galleries, restaurants and boutiques. Old mansions and turn-of-the-century bungalows open up to charming tea rooms and museums, while the former Vaudeville house and movie theatre, Florida Rep, brings Broadway classics to its iconic stage for those searching for evening entertainment. For drinks, there’s no shortage of places to see and be seen. 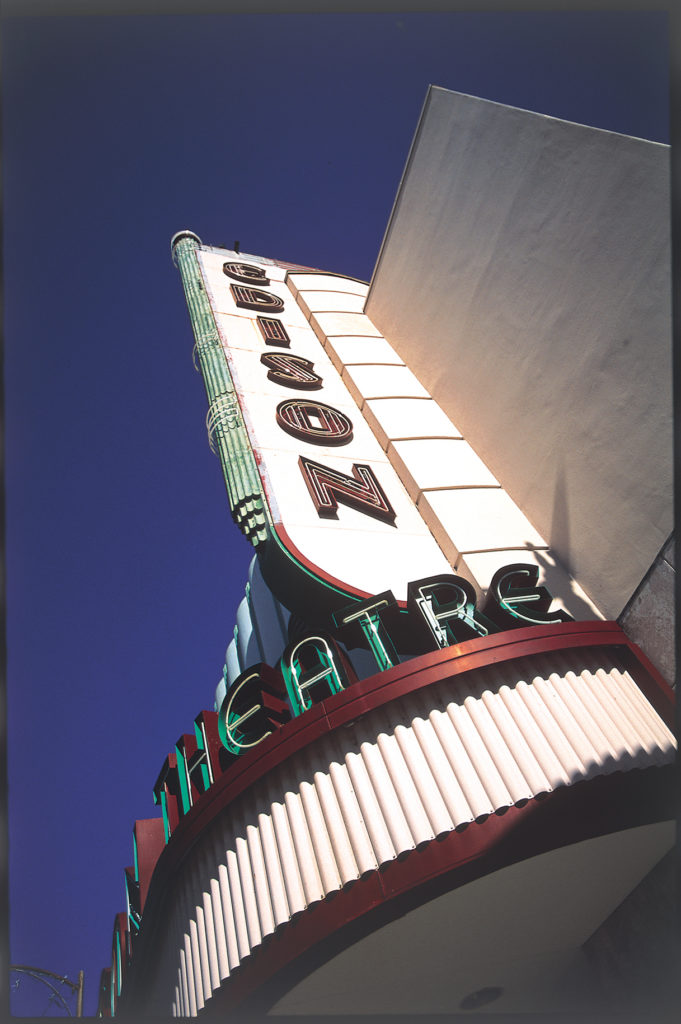 These two areas are rising as the ultimate hubs for arts and culture.

Bayshore Arts District—anchored by a food truck park and Naples Botanical Garden—is booming with vibrant businesses. The neighborhood’s main drag, Bayshore Drive, has come a long way from its outlaw days when it was known as Kelly Road. Two decades later, it’s quickly evolving with an influx of cultural developments. Celebration Park—a waterfront chickee bar flanked by about a dozen food trucks—is a major catalyst for the neighborhood and gets tons of buzz for its sunsets and ample dining options (tacos, Maine-style lobster rolls, legit barbecue). The queen bee of the neighborhood, the 170-acre Naples Botanical Garden, opened 11 years ago after nearly 20 years of planning. Now it’s home to more than 36,000 species of plants. Stop by to see rare orchids, learn about native blooms and take a stroll through the butterfly garden. 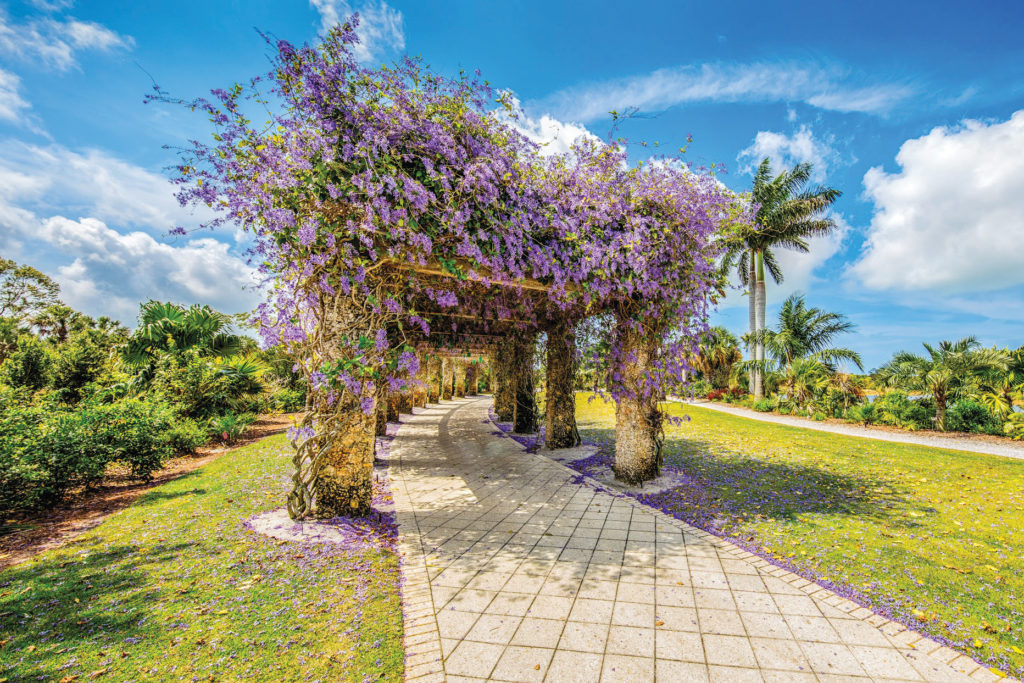 As Fort Myers gets more crowded and mainstream, art entrepreneurs have started moving east to Gardner’s Park. Named for the family who founded the industrial area as a guava plantation in the 1800s, the neighborhood is being revitalized as a creative center for artists and makers. Contemporary painter Marcus Jansen was one of the first to draw attention here when he planted his Unit A Studio and Residency in a warehouse on Dr. Martin Luther King Jr. Blvd. A few years ago, Laboratory Theater of Florida settled down in a historic Lutheran church on Second Avenue. The theater perfectly captures Gardner’s eclectic vibe with its envelope-pushing lineup of new plays, LGBTQI-friendly works and out-of-the-box productions. For daytime dining, shopping and perusing, there’s DAAS CO-OP Gallery in the The Butterfly Estates complex, which also includes Bullig Coffee & Bites and a butterfly conservatory. Nearby on Thompson Street, you’ll stumble upon the impossibly cool Remedies Parlor, with its curated mix of jewelry and home wares—plus a lush patio perfect for sipping the boutique wines in stock. Visit Gardner’s during the First Friday Art Walk, when artists and gallerists throughout downtown keep their doors open late and host special offers and activities for guests. End any excursion with a locally made beer at the hip Millennial Brewing Company, which is also home to a kombucha bar.

After making your way through the cities, get off the beaten path in these charming enclaves.

A small residential community located on Gasparilla Island, Boca Grande is well-known for its historic downtown, sugar-white beaches, blue water and world-class tarpon fishing. The serene sensibilities can be traced to the fact that all but two of the roads in Boca Grande are designated strictly for golf carts. The spot is so idyllic that it starred in the Denzel Washington movie Out of Time, as well as the movie Hoot, based on Carl Hiaasen’s book by the same name. Its level of privacy makes it ideal for high-profile visitors and residents. The Bush family and Audrey Hepburn called it home seasonally.

If you think you might be ready for island life, a visit to this world-famous stretch of sand will confirm it immediately. Though it’s just minutes from the mainland via a beautiful and lengthy causeway, it feels time zones away. There are no amusements or nightlife or high-end car dealerships. It’s just the sun, the sand, the surf, you and some like-minded people waiting for the green flash. (Legend says that you see a green flash at precisely the moment the setting sun dips below the horizon.) It’s a perfect spot to rent a bike and explore, going from some of the best shelling beaches in the world to the Sanibel Island Lighthouse and any number of cute little restaurants perfect for family dining. If you want a place to slow down and reconnect with yourself, this is it.

If “quirky” were ever ascribed to a neighborhood, this little fishing village tucked between Cape Coral and Pine Island would be pictured right beside it in the dictionary. The antithesis of the suburbs, condo life or gated communities, Matlacha (pronounced Matt-LaShay) is a small strip lined with colorful art galleries (it’s home to internationally renowned artist Leoma Lovegrove), gift shops, restaurants, bars and residences right on the water. While fishing is not the only thing there is to make life enjoyable in the small town, it’s easy to see why that’s a big pastime for the approximately 750 residents. If your vacation is missing a little quirk, Matlacha is a must-see.

The largest of the Ten Thousand Islands, Marco Island sits on the southern tip of Southwest Florida, with the Gulf of Mexico on one side and access points to Everglades National Park on the other. The island is home to what are considered some of the world’s most beautiful beaches, and it’s also a favorite for boating, since many homes and hotels are beachfront. Here, you’ll find an upscale resort atmosphere mixed with laid-back fishing village vibes. Golfers can take a swing on one of JW Marriott Marco Island Beach Resort’s two championship courses or spend the afternoon at the resort’s oceanfront spa. Shelling is spectacular on Marco Island, and guided boat tours can take you to some of the more secluded shores in the area. Another way to explore the many uninhabited isles: by kayak or canoe through the mangrove-lined estuaries of the Ten Thousand Islands National Wildlife Refuge, home to manatees, sea otters, crocodiles, and plenty of pelicans.

Local developer Syd Kitson purchased 73,000 acres of land from the Babcock family and sold most of it—all but 18,000 acres—to the state in 2006. But rather than pursuing the sorts of projects he’d been known for on those remaining acres, he aimed to create a living laboratory that tested, among other things, his theory that developers could turn a profit and protect the planet. The project is focused on principles that include sustainability, healthy living, education and lifelong learning, technology, transportation innovation, storm safety and solar energy. Upon completion, developers say the town will be 2 square miles larger than Manhattan and will house about 50,000 residents. Negotiations are underway with companies that may ultimately set up shop there as well, but no official announcements have been made.