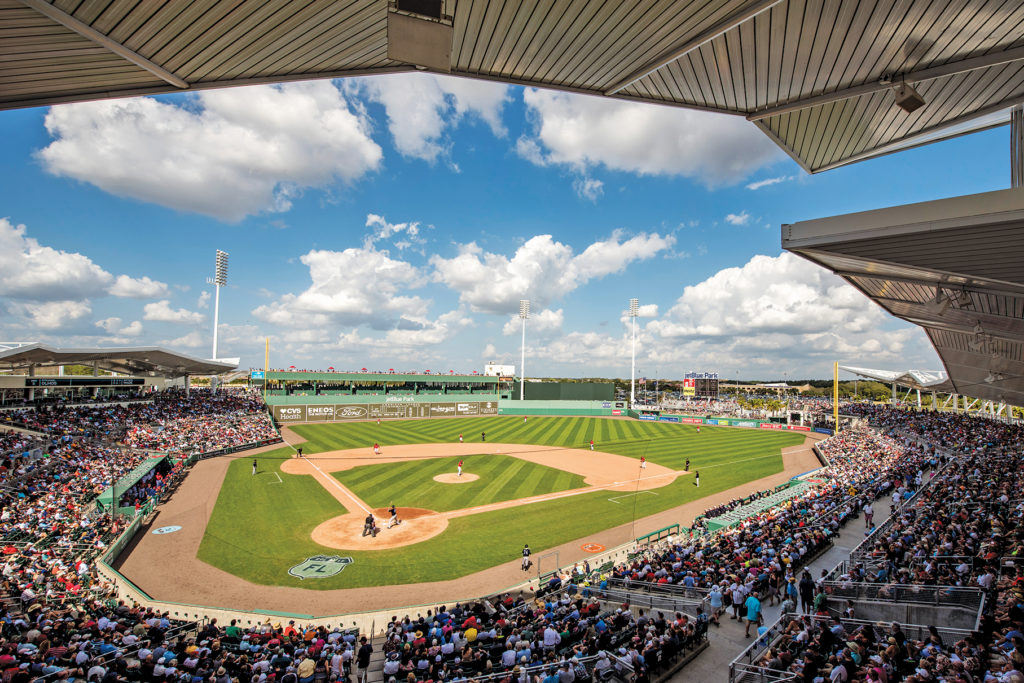 The feel of Fenway Park without the frenzy. The tastes of Target Field without the temperatures. And, to top it off, you’ve got the Tampa Bay Rays, too.

This is the place to be when it comes to the opening strains of baseball season each year, as the Boston Red Sox, Minnesota Twins and in-state Rays head south to spend February and March prepping for the imminent 162-game, regular-season grind.

Spring training is certainly headed by the Red Sox, who’ve become almost perennial winners in recent years, with three additional World Series titles since dramatically ending an 86-year drought back in 2004. The Boston organization makes its Lee County home at JetBlue Park at Fenway South in Fort Myers, a $78 million facility that opened in 2012 and holds nearly 11,000 fans. Fenway Park provided the inspiration for several of the signature features, including a 40-foot-high “Green Monster” in left field—which features seating both on top of and behind the wall—as well as a manual scoreboard.

Just 6 miles west at the CenturyLink Sports Complex, the Twins continue a long relationship with Lee County that began with a World Series championship season in 1991.

The main stadium was renamed Hammond Stadium in 1994 in honor of Bill Hammond, the deputy county manager who was instrumental in getting the complex built for the Twins.

The Rays arrived on the local spring training scene in 2009, taking up residence at Charlotte Sports Park in Port Charlotte, and making it the first MLB team at the park since the Texas Rangers ended its stay eight years earlier. The facility earned a Readers’ Choice Award for Best Spring Training Facility from USA Today in 2014, and features a baseball boardwalk ringing the outfield, a family-friendly kids play area, upgraded concession stands and a top-notch team store. The Rays’ minor-league affiliate in the Florida State League (FSL), the Charlotte Stone Crabs, also call Charlotte Sports Park home. The Stone Crabs won a league title in 2015, hosted an FSL All-Star Game and have earned multiple trips to the playoffs since its 2009 inaugural season.