In the past, country singer Ben Allen, the frontman of the Ben Allen Group and one of the brightest stars in the local music scene, had applied to go on NBC’s singing competition show The Voice several times, but nothing had come of it. About two years ago, while scrolling through his phone, he came across the number of the show’s casting director, whom he had interacted with during a previous audition. Allen wasn’t sure the casting director would even remember him, but Allen figured he had nothing to lose and made the call.

Three days later, Allen found himself in North Carolina auditioning for the show. He made the cut and was soon on a plane to Los Angeles to begin filming. The sights and sounds of Hollywood are a far cry from the starting line for Allen, who grew up in rural East Tennessee. As a kid, he participated in choir, but didn’t start taking music seriously until his early 30s. In 2009, he relocated to Florida, where he worked for the Collier County Water Distribution Department. He started playing at bars and open mic nights around town. “Something clicked inside of me—I wanted to be a performer,” he says.

Although Allen didn’t end up with The Voice crown, he was a semifinalist amid fierce competition. He also benefited from coaching by Blake Shelton, one of the show’s judges and a hero of Allen’s—both personally and professionally. “His personality is so magnetic. He comes across as very honest and real, which means something to me,” Allen says. “Country is about music that speaks to people—there’s a lot of truth in the songs.”

Whether it be gigs around the corner on a neighborhood stage or private affairs for fans, Allen offers a unique brand of modern country music: He possesses that classic vibrato similar to Ronnie Dunn and Craig Morgan, as well as a country twang akin to Randy Houser and Hank Williams Jr.

Since his time on NBC, Allen has been constantly told to pack his bags and guitar, and head for the bright lights of Nashville. But Allen has already done the “Nashville thing,” living and working just north of Music City for a period before moving to Florida. Being in his 40s while his music career is taking off also allows him some wisdom in his perspective and the opportunity to open Ben Allen’s Backyard Grill & Pub in North Naples.

“You know, I grew up in a small-town, blue-collar mentality. And down here? It’s still a small town, but it’s more that there is no collar color,” he says. “You throw the collar away because you’re having a good time, you’re enjoying a lifestyle—and I want to help with that through my music.” —Garret K. Woodward

When Chad Jensen moved to Naples in 2004, the then 26-year-old creative, who had recently transplanted from Detroit, felt wholly out of place. Long-haired and casually dressed among suit-and-tie-clad crowds, he was usually the youngest attendee at any given art gathering. His inclination toward contemporary art also stood in stark contrast to the dominant devotion to the Old Masters among local collectors.

Over the past two decades, though, Jensen has seen a shift toward a broader and more current appreciation for art. These days, it’s customary to see different generations of art enthusiasts in one room. Public art initiatives are also taking center stage, and there’s a strong push to foster elevated cultural experiences throughout the region. 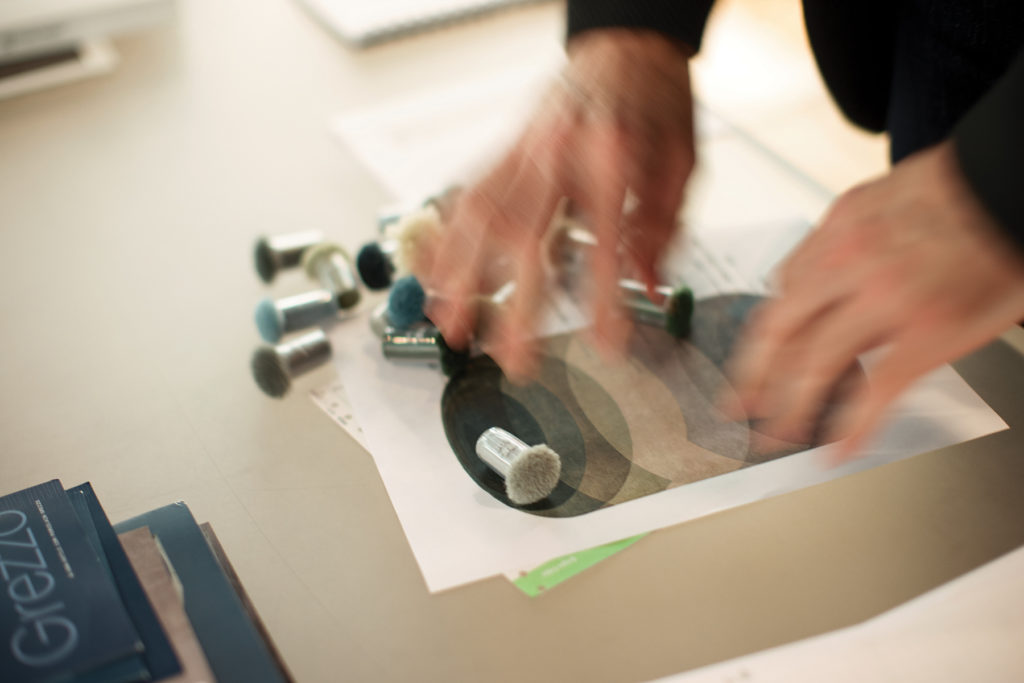 Jensen has had a lot to do with spurring this shift. After working with the Thomas Riley Artisans’ Guild for about nine years, he made a case for launching a satellite project, METHOD & CONCEPT—a contemporary art gallery that doubles as a design studio. Jensen thought the region might be ready to add to its artistic repertoire and embrace newer, expressive forms of contemporary art, which are oftentimes progressive and slightly unorthodox.

He was right. In its ascendance to becoming one of the most respected galleries in Southwest Florida, METHOD & CONCEPT recently relocated to a larger, loftier space in The Collective. Within the gallery, Jensen focuses on emerging and midcareer artists to shine a light on what’s next in the art world. Outside the gallery, his interior design projects are often defined by niche, collectible objects, artisan detailing and convention-defying designs.

Jensen’s view isn’t insular, either. Since arriving in Naples, he has committed himself to advancing the creative culture. In addition to hosting gallery events aimed at making high art approachable, curating shows with Naples Botanical Garden, showing work at Artis—Naples, The Baker Museum and serving as two-term president of the United Arts Council of Collier County in 2016 and 2017 (the youngest person to do so), Jensen also helped establish the Naples Design District.

For many, the formation of the district in 2018 presented a tipping point. The hub, with more than 30 arts and design businesses, has given a place and a face to the local creative scene. “Dare I say it’s given the city a little grit?” he says. “It feels authentic and appropriate. There are so many of us in the district that don’t depend on seasonality, and we want people to feel that design is a year-round lifestyle.” —Nila Do Simon

For 10 years, sculptor Brett F. Harvey and silverpoint artist Lauren Amalia Redding lived the New York-artist lifestyle with long work hours and cramped living quarters. They graduated at the height of the recession, and Redding took odd jobs, once working as a “not very scary” security guard at the Metropolitan Museum of Art. Harvey worked as a lead installer for Jeff Koons. Redding later joined him there, working on surface refinement projects for the famed artist. They were hitting their stride—the couple had an apartment with studio space, Harvey’s work was getting ink in reputable publications, and Redding was showing at exhibits across the U.S. But she felt unsettled. “We hit a plateau in terms of what we could physically and logistically do,” Redding explains.

With Redding driving the push, they searched for a growing community. Naples, where she’d grown up until she was 8 years old, checked all the boxes and allowed them to find a large, affordable space where they could both work. “We felt we could actually create and experiment more in a booming area like Southwest Florida,” Redding says.

In late 2018, after relocating to Naples from Queens, New York, they formed H&R Studio in a 1,800-square-foot space on Radio Road. Their works draw on ancient techniques and classic tools to reflect on the contemporary world. Harvey is the sculptor, and his workshop, which has room for two welders and a drill press, provides ample space to create small-and large-scale pieces. Redding’s primary discipline is drawing. She works with a pre-Renaissance technique called silverpoint, using a stylus with a fine tip of silver wire to make scratch-like marks on a prepared surface of rabbit skin glue and zinc oxide (a delicate mixture that she painstakingly gessoes onto a panel). On a web page or in print, you could mistake the renderings for pencil drawings. But in person, the silver hue—which evolves and tarnishes with time—is unmistakable.

While figurative art is timeless—the couple define it as artwork that depicts the human form in response to the world around it and isn’t beholden to a specific style, school or time—it hasn’t been as prevalent in the last half-century as abstract art has taken center stage. However, the couple notes a resurgence for figurative art and they look to grow its presence in Southwest Florida through exhibits and workshops that cover painting, sculpture and silverpoint drawing. “Even if the art market determines other genres to be in or out of vogue, figurative art is universal,” Redding says. “It’s always appreciated by any person from any culture, educational background or era, just by our innate ability to look at and ponder the image of a fellow human.” —Terry Ward