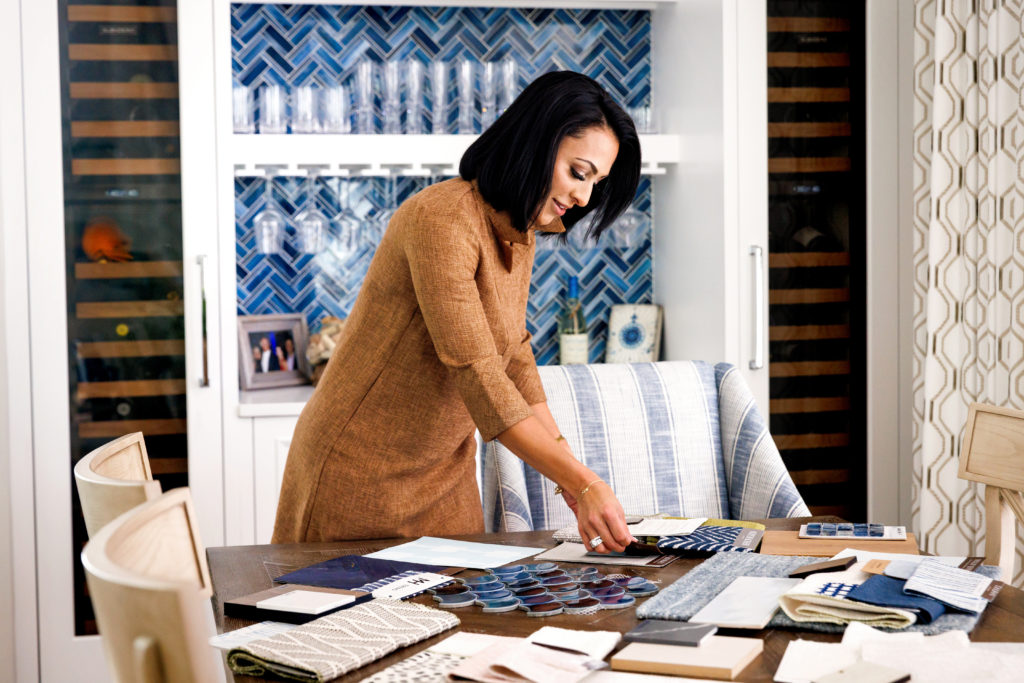 The Naples-born designer creates spaces that are ideal for coastal living and gathering with friends and family. (Photo by Scott McIntyre)

Alexis Limb is emerging from a nearly decade-long emotional roller coaster. Soon after she branched out to start her firm, Alexis Marie Interiors, the designer was faced with the premature birth of her son in 2018, followed by her husband’s unexpected passing last year. But, Limb is resilient. She channels her love for her family into her career, creating bespoke, inviting spaces for other families. “I had this vision for my life, where we could have our family and I could do what I love and help provide,” Limb says. “It was important to me to have something that I created and have something of our own.”

Born and raised in Naples, Limb is well acquainted with the plush Port Royal estates, decked-out gated communities and waterfront condos that define the region; and she has seen the city’s evolution firsthand (her father, realtor Paul Barrett, has sold homes in North Naples’ luxury golf community Talis Park for more than 30 years and her aunt is an interior designer). Her path toward design was clear. The summer before her freshman year at Florida State University, she scored an ongoing summer internship at Design West that led to a successful nine-year career with the Naples firm.

The designer has also been engulfed in the charitable scene since the early days of her career. She launched an annual pub crawl to benefit Susan G. Komen Breast Cancer Foundation, which she ran with a friend from 2008 to 2014. When planning the 2011 event, a family friend asked if they could invite someone named Jimmy. On another night out, they asked again. “I didn’t know who this ‘Jimmy’ guy was who he wanted to bring everywhere, but I was like, ‘Yeah of course,’” she says, with a laugh. When she met the charming entrepreneur, James “Jimmy” Limb, she instantly understood: It was a setup. “I felt really strongly what a good person he was,” she says. By 2014, they tied the knot.

Two years later, she launched Naples’ Allure Designs, working as a one-person firm while starting her family. Limb was well on her way to rebranding when she became pregnant with her second son, Brooks, and went into labor at 27 weeks. “I had been on a job site that morning,” she recalls. The whole thing, “felt like I was just going through life and watching from another perspective.” While a premature Brooks spent nearly two months in the neonatal intensive care unit, Jimmy and Limb took turns visiting him in the hospital, shuttling their eldest, James, to and from school and running their respective businesses (Jimmy owned a local pressure washing company).

Once Brooks was home and healthy, it was back to business for Limb, who officially rebranded as Alexis Marie Interiors in 2019. The next year, she was asked to create an office space at The Ronald McDonald House of Southwest Florida for parents whose kids are being treated at Golisano Children’s Hospital. She intuitively knew what to do with the space, creating a Zen area with soft fabrics, calming shades of blue, and warm accents of brass and gold. “When you’re going through something like that, you just want everything else to be calming, especially when you can’t be in your own home,” she says.

Last year, March of Dimes asked the Limbs to be the Ambassador Family for the 2021 Signature Chef’s Auction. Then, Jimmy fell ill with COVID-19 in August; he passed in September at the age of 40. “The situation with Brooks really prepared me for that,” she says. “Going through that whole experience together strengthened our bond and my bond with God.” She relied heavily on her small-but-mighty, all-female team (a design assistant and one fellow designer) to keep projects moving as she took time to grieve. “I wouldn’t be where I am without the support system we have, whether it’s the team at work, family, friends and even the design community,” she says. “I had several designers from here in town reach out, asking what they could do to help.”

Getting back into the studio, in recent months, has been therapeutic. “It is a creative outlet, where I can sit down and I don’t really have to think about anything else,” she says. Thanks to her local roots, she has a knack for uniquely coastal design that doesn’t rely on trends or kitsch. Instead, she layers textured linens, natural stone details and living green walls that nod to the surrounding lush vegetation. For a recent family-friendly Fort Myers home, she outfitted the backyard with a putting green, table tennis, a cabana and several more lounge and play areas by the Caloosahatchee River.

She’s a go-to source for residents at the chic Kalea Bay, where she designed more than a dozen units. What really moves her, though, are custom home builds, and she loves working with the team at Bonita Springs-based architecture firm R.G. Designs (the owner is also a family friend).

Limb credits her family, including her late husband, for her success. Each day, she channels Jimmy’s propensity for structure, (“He was always making lists,” she says) creating mental checklists to keep her motivated: “As I wake up, I hear him saying, ‘Just get up, start your day, and check the next thing off the list.’”