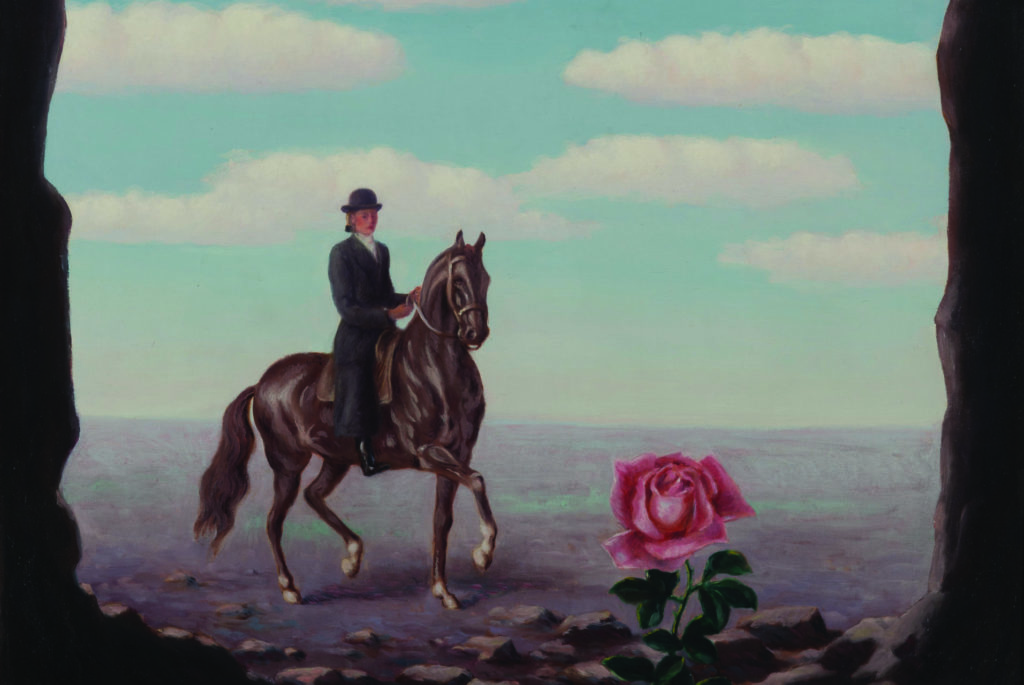 Over the years, there’s been a worthy supply of top-tier exhibits in Southwest Florida, with centers like Florida SouthWestern State College’s Bob Rauschenberg Gallery bringing through artists like Yoko Ono and the Guerrilla Girls since the late ’70s. The introduction of The Baker Museum at Artis—Naples in 2000 amplified our access. And, recently Naples Art has been elevating the cultural conversation with shows by Keith Haring and Henri de Toulouse-Lautrec opening and closing the current season. Still, it’s not often that artwork you’d typically have to board a plane to see—or the type of exhibition usually reserved for the museums of major cities—passes through the Gulfshore. But, that’s the case with Magritte: Reflections of Another World, The Baker Museum’s exhibit focused on the Belgian Surrealist master René Magritte.

The show opened in 2019 with six paintings that haven’t been shown in decades and have never been exhibited in North America. Most of the pieces had never left their collector’s native Belgium. On loan for five years, the works are on view until 2024—a coup for local art lovers who have ample time to commune with the works by the enigmatic artist.

Magritte combined realistically painted symbols, figures, text and landscapes into wry, dreamlike images. His six paintings at The Baker are intimately housed in a darkly painted gallery and glow like gems in a jewel box. They’re accompanied by a case with artifacts, including letters between the artist and the collector and a home video of them on holiday. Here, The Baker Museum’s curator of modern art, Dr. Rangsook Yoon, delves into three of the paintings you’ll see and how they reflect the artist’s power to captivate viewers.

Les Grandes Vacances (Summer Holidays) (1956): In this painting, Magritte depicts an idealized young woman, her golden mane tumbling over her shoulders and arms, her bosom perfectly symmetrical, her lips barely parted. She stands columnal in front of azure water and under an equally bright night sky. A crescent moon almost touches her tresses like a crown. “I feel as though I am transported to a pristine beach on the Côte d’Azur on a clear summer night,” Yoon says. Modeled after Magritte’s wife, Georgette Berger (who he met when she was 12 and he was 14), the figure was painted decades after they married. In the piece, she reads like an ancient fertility goddess emerging from the water, Magritte’s counterpoint to Sandro Botticelli’s famed Renaissance painting, The Birth of Venus. “When our team first opened the crate, Summer Holidays took my breath away,” Yoon recalls. “Two years later, whenever I stand in front of this beautiful, Venus-like figure who looks out directly toward the viewer, I still feel the same way.”

Shéhérazade (1947): “As in Summer Holidays, Shéhérazade encapsulates the fantastic and sensual elements commonly found in Magritte’s work,” Yoon says. The only painting in Reflections of Another World done in gouache (a fast-drying, water-based paint unlike oil in its application and its flat, matte appearance), the piece depicts the storyteller-turned-Persian-queen from the Middle Eastern tales One Thousand and One Nights (also known as Arabian Nights). In this abstract portrait, no literal face or bust is rendered. Instead, floating strings of pearls encircle eyes and a mouth, with a midday sky visible through the strands. “Representing only her piercing eyes and gently pressed lips, traced with an arabesque ribbon of pearls, the painting is like a portrait of this imaginary queen,” Yoon says. Given the cheerful clouds, glittering waves, and pink curtains in the background, this painting hardly seems mysterious—especially when contrasted with Summer Holidays’ enigmatic nighttime setting—until the viewer notices the face within. “It evokes the enchanting, magical stories she tells in One Thousand and One Nights,” Yoon says.

La Tour d’Ivoire (The Ivory Tower) (1945): “A sense of otherworldliness is latent in all of Magritte’s works. The Ivory Tower is no exception. The work’s ambiguous meaning makes it even more intriguing and alluring to me,” Yoon says. The painting doesn’t depict an ivory tower but the inverse: the craggy mouth of a cave. “Every time I look at the painting, fully knowing that it is a futile attempt, I try to establish a rational relationship between the equestrian figure and a rose in the foreground at the threshold of an open cave,” Yoon says. Magritte paints the cave’s opening around the canvas’ edges, so the viewer looks out from the cave onto a refined but unexpected scene: a rider sitting astride a glistening chestnut horse prancing toward a soft, pink rose at the cave’s entrance and Magritte’s signature blue sky filling much of the canvas. Knitting a rational relationship between the seemingly disparate elements—the cave, the equestrian, the rose and the sky—might require mental gymnastics, but it sure is fun. “That is the power of Magritte’s paintings,” Yoon says.