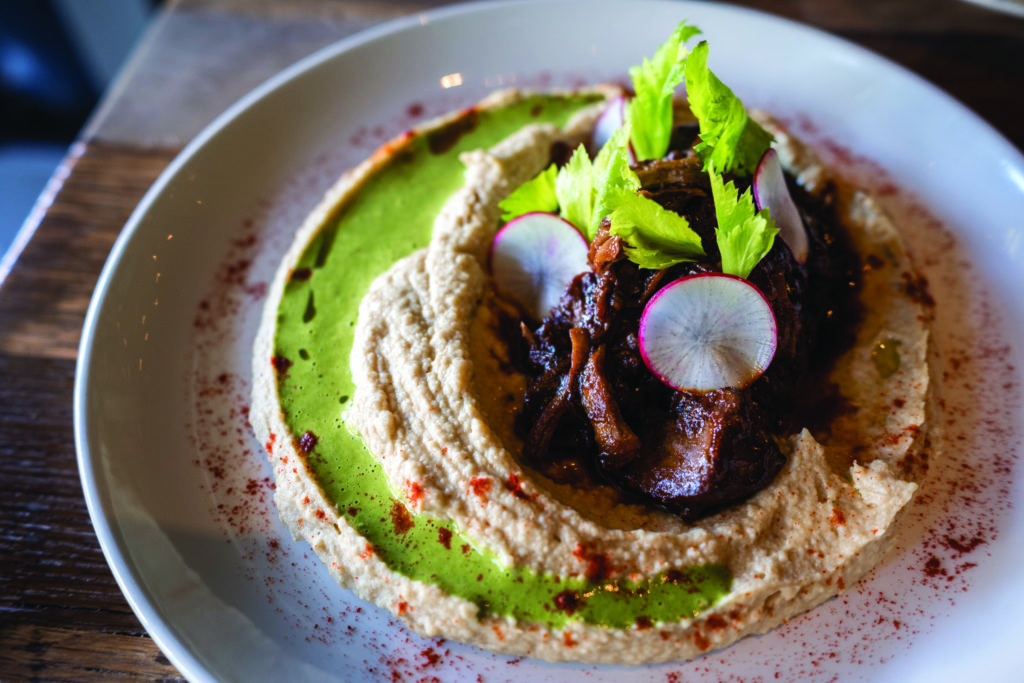 The former location of the beloved Café Lurcat, the space was one of Old Naples’ most desirable dining spots when it fell vacant in 2018 before being acquired by Ocean Prime restaurateur Cameron Mitchell. His landlord and friend, Naples developer and hotelier Phil McCabe, steered him toward the building. “When the opportunity came up, it was a natural fit for us,” Mitchell says, noting that the Mediterranean architecture inspired the menu, which follows the coast from southern Spain and Morocco to France, Italy, Greece and Turkey.

The rare, second-floor outdoor seating was grandfathered in for the previous owners, and Mitchell fought hard to retain the permitting. Once the space was secure, he engaged Illinois architecture and interior design firm Knauer to helm the remodel, which languished for more than two years due to the pandemic.

As work was underway, McCabe’s son, Philip, acquired a small space across the street and began developing The Vine Room, a chic, ivy-shrouded cocktail bar. Knauer designed the velvet-and-onyx-adorned lounge, and the Cameron Mitchell Restaurants team consulted on the high-brow bar bites and layered cocktails that comprise the menu. When Del Mar and The Vine Room opened within a month of each other at the end of 2021, Neapolitans got a new, stylish duo for a night of dinner and drinks.

At Del Mar, a team of six chefs worked for three months to design the Mediterranean menu, led by executive chef David Vilchez, who was previously at the Beverly Hills outpost of Ocean Prime. Heavy cream and butter are out; instead, dishes are dressed with aged balsamic vinegar and citrus, sprinkled with za’atar and topped with dollops of labneh, a strained Middle Eastern yogurt with a cream cheese-like texture. Elements from the region’s cuisines weave into plates like the spicy feta dip and coarse roasted red pepper spread, served with housemade pita, and the charred octopus bathed in bell-pepper vinaigrette with a dash of mild Espelette pepper.

Lamb is a common thread throughout, found in the spicy sausage Turkish flatbread, tomato-and-harissa-stewed meatballs and hummus topped with pomegranate-braised lamb. The meat shines brightest in the family-style rack of lamb tagine; the centerpiece of the wood-fired “From the Hearth” section of the menu is roasted and served in the traditional North African earthenware pot.

In addition to a selection of Mediterranean wines, like Provençal rosé and assyrtiko from Santorini, the bar weaves regional spices and aperitifs into handcrafted cocktails like the
Citrus Coast, a blend of Greek Lightning cinnamon-honey liqueur, citrus vodka, lemon and Aperol.

While the menu is unmistakably Mediterranean, the design teeters between coastal-chic and contemporary, with an exposed kitchen and gallery-like walls of wine. Commissioned art fills the space: A sculptural paper art installation by artist Hailey Pinkerton (who also works with local Herscoe Hajjar Architects) makes a striking impression at the bottom of the staircase; a large botanical-inspired print by Naples’ painter Carmelo Blandino meets diners on the second level; and an Impressionistic seascape canvas by artist Josef Kote graces the ground floor. Teardrop light fixtures and other installations are scattered throughout the space, and ceiling-height potted trees in the upstairs dining room bring the outdoors in. With every sun-tinged, hearth-fortified, inviting detail, Del Mar is the best new interpretation of the Mediterranean in Naples.

Caddy-corner, The Vine Room isn’t as easy to spot among the sea of vines that covers its facade. Modeled after modern-day speakeasies, owner Philip McCabe Jr. envisioned the cocktail list to read like a round-the-world trip, with a menu divvied up by continent.

Drawing on experiences at iconic cocktail bars, like Bar Hemingway at Ritz Paris, he worked with Knauer to give the cocktail lounge the feel of a five-star hotel bar with a tropical twist. A hand-painted jungle mural wraps around the lounge’s interior, crowned with a gold ceiling, dark wood walls, plush green velvet banquettes, and a honey onyx bar with mirrors and foliage poking out above. By the banquettes, long white feathers (remnants of the Gatsby New Year’s Eve party) add a touch of Gilded Age glamour, while most of the vintage art nouveau posters nod to personal experiences and places the young McCabe has visited.

The cocktails were inspired by some of The World’s 50 Best Bars, including theatrical Barcelona speakeasy Paradiso. Taking a cue from Paradiso’s playbook, The Vine Room’s cocktails are experiential. The cachaça-based Box of Tricks is presented in a mini treasure chest with smoke billowing from its seams; the São Paulo-inspired Message in a Bottle, made with Brazilian banana liqueur, is garnished with a cinnamon stick and a large ice sphere frozen around a fresh rose; and the bestselling VR Margarita, finished with a layer of salted ocean foam, is modeled after one at Spain’s Michelin-starred Hoja Santa. And, for discerning traditionalists, the vintage section of the menu features a $65 Negroni made with 40-year-aged Campari.

If you’re sitting at the horseshoe-shaped center bar, go for dealer’s choice, and one of the bartenders will whip up a cocktail with bells and whistles, like The Flavour Blaster, a smoke-filled bubble that floats on top of drinks for guests to pop. “In Naples, people are world travelers. They’ve been all over,” McCabe, who is often at The Vine Room bussing tables and consulting on orders, says. “I wanted to build a place that you have to go to. It’s more of an experience.”