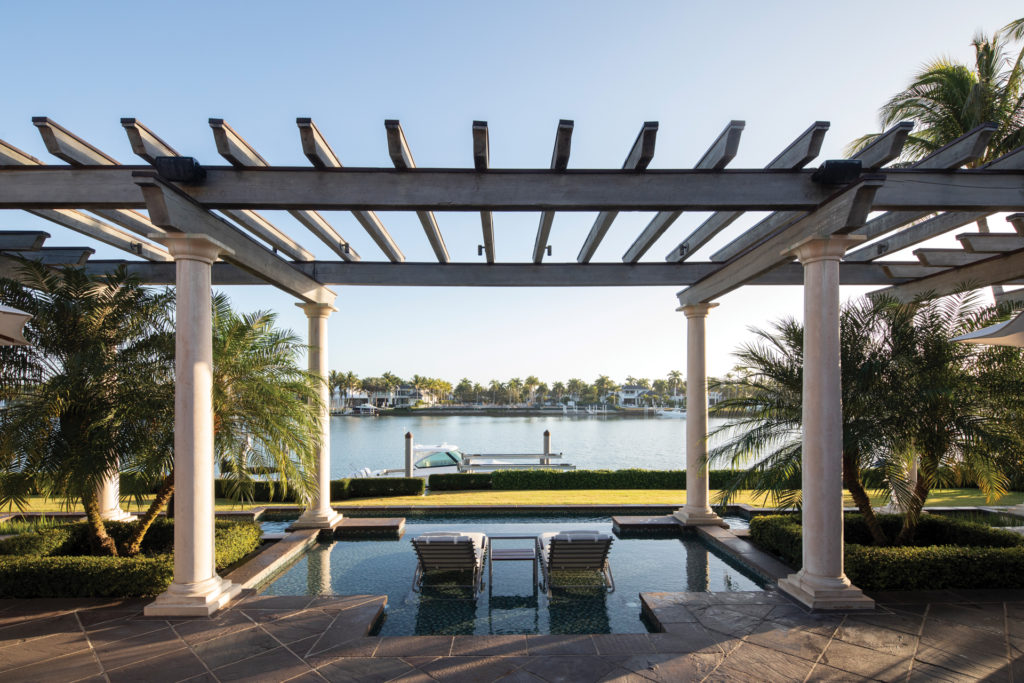 Sutherland lounge chairs provide a place to relax under the partial shade of a wooden pergola. For parties, the couple is known to cover the sun shelf with Plexiglas, creating extra space for mingling. (Photo by Robin Hill)

Come rain or shine, Kathryn and Rodney Woods’ outdoor living area is now fully outfitted for whatever the day brings.

The Naples couple already had a stunning backyard, complete with a waterfront pool (wrapped in tile from top glass mosaic producer Bisazza) and an expansive lanai. When they decided to add a tech-enhanced Renson Camargue pergola from GWT Outdoors to their adjacent patio, they got one step closer to harnessing the elements. The sleek, powder-coated aluminum structure features automatic louvers and solar shades that adjust to make weather fluctuations almost nonexistent.

Taking advantage of current technologies by updating outdoor living areas is a great way to bring your backyard into the 21st century. Plus, in our warm climes, it helps to have a space that shields you from harsher weather while beckoning with stylish, comfy lounge areas. This was something the Woods were missing in their Port Royal home. “All we had before was a gas grill,” Kathryn says. “Nobody ever went out there.”

The Renson pergola, which meets Miami’s stringent wind-load requirements, has louvers that can rotate 150 degrees and be shut through a phone, remote or smart home system. “When you close it, it’s watertight,” Stuart Sheppard, the owner of Naples-based GWT Outdoors, says. The louvers are designed so that when you open them after it rains, water is redirected into the built-in gutters and you don’t get splashed. On the sides, automatic solar shades open and close to adjust the airflow and sunshine throughout the space.

Sitting right off the kitchen and the lanai, the 17-by-14-foot pergola serves as the home’s primary outdoor dining area, extending above a custom table with handpainted Gervasoni ceramic bases and eight JANUS et Cie chairs. Box planters were moved from the main lanai area to surround the new outdoor dining space, seamlessly integrating greenery into the design and serving as a protective perimeter, so guests don’t accidentally step off the ledge. Another 6-by-4-foot Renson structure juts off the side, housing a German-made Cook-N-Dine teppanyaki grill, which itself is an aesthetic and engineering marvel: When it’s shut off, it appears as a sleek sheet of stainless steel; when it gets hot, the center depresses, creating a wok-like area for cooking. The grill is surrounded by Renson’s Linius louvered cladding, and its front columns feature integrated LED lighting. For can’t-miss sporting events, there’s also a television surrounded by the same cladding.

The Woods’ interior designer, Chandra Payne of CPayne Interiors of Dallas, loves the modern lines of the pergola juxtaposed with the more traditional home: “We talked about copying the lanai with the wood ceiling, but we wanted a lighter space that wasn’t going to make that side of the house heavy.” As inspiration, she thought about I.M. Pei’s Louvre Pyramid and how it modernizes while not detracting from the original French Renaissance building.

And while the space is mainly used for dining, it also functions as a garden room, providing an ideal weather zone for Kathryn’s plants. Every fall, she fills the home with orchids, which would wilt after season. Now, with two open sides and an adjustable roof covering for light, “my orchids will thrive over the summer months,” she says. Her flowers sit on dueling custom racks between the pergola and lanai, while a rolling herb garden and potted ferns add greenery.

Two Philippe Starck-designed Kartell Bubble Club chairs fill out the pergola, which overlooks the backyard, dock, pool and water. It all connects beautifully to the pool deck that stretches across the backyard with a wood pergola that offers partial shade when the couple is sunning on their Sutherland loungers and sets the stage when the sun shelf is covered by Plexiglas for parties. The Woods’ new backyard is truly a space for all seasons and occasions.