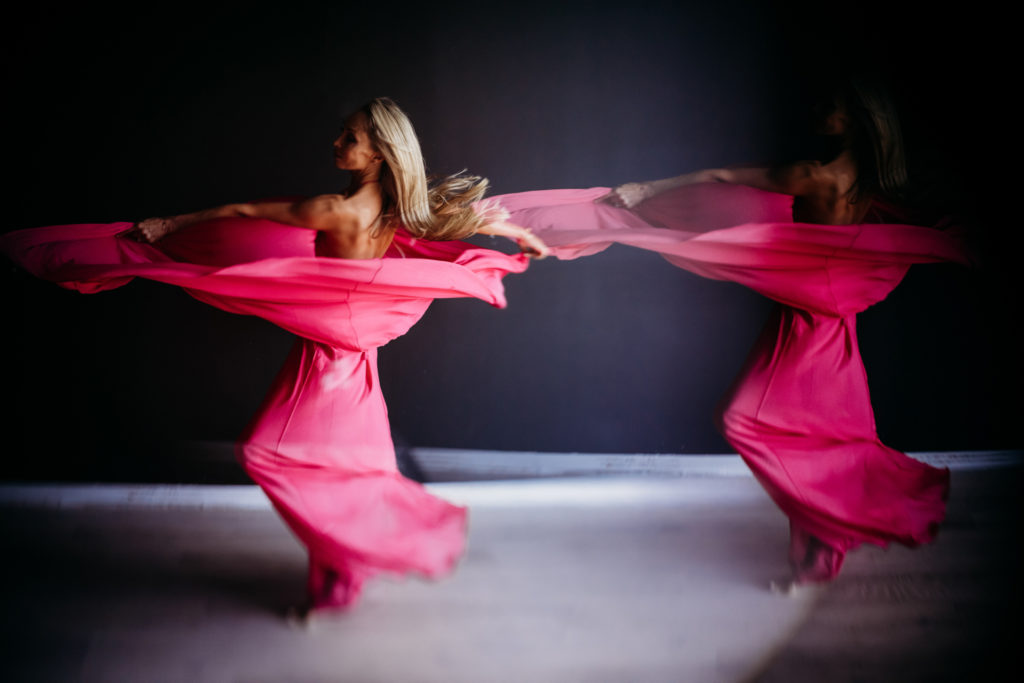 The professional ballroom dancer participated in the TV shows So You Think You Can Dance and Strictly Come Dancing. (Photo by Kelly Jones)

Iveta Lukošiutė chasséd her way into her very first dance class at a young age—4 ½ to be exact— a move that led to her foxtrotting around the globe. “My mother said I had to be a dancer,” she says. “I had a lot of energy. I started walking at 9 months—I didn’t crawl.” Turns out Mother knew best. At 6 years old, Lithuanian-born Lukošiutė auditioned for the state-sanctioned ballroom dance ensemble. “It was still the Soviet Union and not so easy to get in government-paid programs,” she explains. “But I had the physique and the talent, and I was very lucky to get in.”

By 1997, the Iron Curtain was no more, and Lukošiutė was ready for a change of scenery. She made her way to the United States, first dancing as an amateur in Chicago before moving to New York and turning pro. Alongside partner Gherman Mustuc, the accolades and trophies began piling up soon after. The duo won tons of dance titles, including World Professional Ten Dance Champion (two times), the U.S National & North American Professional Ten Dance Champ (five times), the U.S. National Classical Showdance Champion (four times), and World Classical Showdance Finalists (two times).  Eventually, though, competition lost its luster. “I stopped in 2011,” Lukošiutė says. “After winning all those titles, we felt like we achieved all our goals.”

But, she wasn’t ready to hang up her ballroom heels and move away from the spotlight. She joined the casts of television competitions So You Think You Can Dance and Strictly Come Dancing (Britain’s version of Dancing With the Stars), performing on the latter for three years. Even after years of professional dancing, the challenges live television presented were surprising. “Everything is faster. We had two days to prepare a number, and then we’d dance in front of millions of people,” Lukošiutė says. “You get a new partner, and then it’s, ‘Go out and perform.’ The stress level was very different, as were the hours. You really do work 24/7.” While she thrived on set (“I loved it. Sometimes I still dream of it,” she says.), she started longing for a more fulfilling personal life.

Iveta Lukošiutė said so long to cha-cha’ing with celebrities in London and headed back to New York full-time to focus on the dance studio she opened on Fifth Avenue in 2010. There, she began dating artist and school teacher Jenya Raytses. A few years later, they had a son, were married and outgrew their small apartment. Lukošiutė proposed a dramatic relocation: “I said, ‘If we have to move, let’s move very far.’ I always loved summer and hated winter, but I had only lived in cold places. I had a dream to live somewhere it’s summer all the time.”

Southwest Florida became a leading contender when Lukošiutė was asked to judge a competition in Sarasota. They decided to take a day trip to Naples to check it out. “We loved it from the start,” she says. “The whole city looks like a resort, and there were lots of young people around with kids.” The family officially became Floridians in August of 2019. The move came with an added bonus. “The day after I got to Naples, I found out I was pregnant again,” she says.

Once situated in Naples, Lukošiutė needed a spot to begin teaching again. She opened her dance studio, Glow Dance and Art Academy, in the summer of 2020—during the height of the pandemic. To her delight, COVID-19 didn’t deter students of all ages from showing up, eager to learn the basics of ballroom dance.  It also doesn’t hurt that Iveta Lukošiutė is a walking billboard for the benefits of the artform. “I weigh the same as I did before I had my first child,” she says. She is quick to add that the plusses of a quickstep go far beyond a number of a scale. “You start dancing, and your life will change. Your body and mind transform. You’re happier. You have more energy, and you’ll look younger,” she says. “Every single person can dance … there’s no such thing as two left feet.”