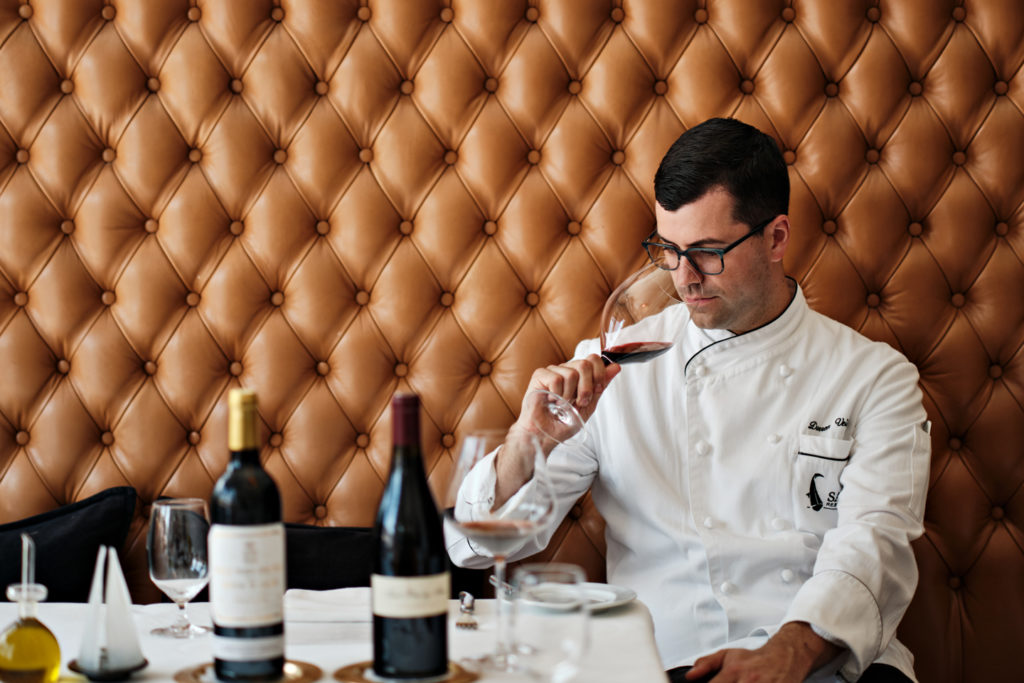 The Johnson & Wales University-trained chef took the top role in Sails’ kitchen when he was 27. Darren’s dishes are defined by his technique-forward cooking philosophy, knack for innovation and artful presentations. (Photo by Dan Cutrona)

The most high-end of Naples’ fine-dining establishments is run by an executive chef who just cracked 30 this month. Darren Veilleux assumed the top job at Sails Restaurant at 27, about a year and a half after starting out as a sous chef.

This being the Futuremakers issue, age matters to us. It does not, however, matter to Darren’s bosses. “I don’t believe in age, on the side of youth or on the side of maturity,” says Veljko Pavicevic, who co-owns Sails with Corinne Ryan. “It’s all about the mindset. What I look for in everyone is their character.”

And if anyone has proved his mettle, it’s Darren. He was sous chef at a farm-to-table restaurant in his native Maine when a former colleague from Rhode Island’s Ocean House, a luxury hotel and dining establishment, invited him to join Sails’ inaugural team. “I said ‘no’ right away,” Darren says with a quick grin. “I didn’t want to move to Florida.” But he reconsidered, packed his Volkswagen and headed south. He pulled up to the Fifth Avenue South address expecting a kitchen and found a construction site instead. “Nothing was in place,” he remembers. “The walls were not painted, the floors were not down, none of the woodwork was hung.”

With no cooking or recipe development to be done (others were managing those tasks), Darren picked up a toolbox. “I would do anything that needed to be done,” he says. The crown molding? That’s his handiwork.

Eventually, the young chef volunteered to cook a daily meal for the staff and construction crew. Nevertheless, once Sails opened, he found himself at the kitchen’s bottom rung. “I wanted to get back to the top. I kept working hard. I pushed myself every day to be better than before and kept focus with my goal in mind,” he says. Notably, his kitchen flattens the traditional back-of-house hierarchy. Out of respect, he calls everyone, dishwashers included, “Chef.”

Drive is part of his DNA. Darren put himself through college, earning bachelor’s and master’s degrees from Rhode Island’s Johnson & Wales University, esteemed for its culinary arts program. While there, he worked in the program’s storeroom and as a weekend chef for the Ocean House, an hour’s drive from campus.

The hard-charging Veljko and Corinne seek out people with such personal ambition, paired with a commitment to teamwork and shared success. “Over the years, we’ve had a couple of three Michelin-star executive chefs,” says Veljko, who brought them on to help scale the business. “They’re not here anymore. Darren is still here.”

If you didn’t know Darren’s age, you’d never guess it. Even early in his tenure, he moved through the kitchen with quiet confidence. His operation is efficient, methodical and calm. “He’s always calm,” says Corinne, watching orders come in with increasing frequency during a Friday night dinner service. The restaurant recently revamped its operations, shifting from an à la carte model to a prix-fixe menu and implementing a computerized system for managing orders. The latter was so different from the traditional chef-led structure that it took six months to master. Darren turned the transition into a game, challenging his team to see how fast they could work through the orders.

Sails’ chefs work in full view of the guests, and Darren likes it that way. The arrangement connects the serving and kitchen staffs, creating a cohesive whole. It also reminds him of student performing days. “I take what I learned in theater and use it here in the kitchen,” he says. “You’re always on stage.”

Guests at nearby tables watch dishes emerge, a few at a time. From a presentation standpoint, they are intricate works of culinary art. From a preparation one, they are remarkably minimalist.

“I really believe flavors should speak for themselves and that simplicity is key,” Darren says. Together with his bosses, he combs the world in search of the highest-quality ingredients. Once, the team performed blind taste tests of 50 caviars, searching for the perfect one. The ingredient-forward philosophy shines through in the dishes—crab meat gently tossed with crème fraîche, unimaginably sweet scallops dressed with citrus emulsion, octopus that absorbs sultry cherrywood smoke from the restaurant’s custom grill. “Simplicity is the most difficult thing to achieve in cooking,” Veljko says. “And that’s what he’s been delivering in the last four years.” Minimalism, though, does not impede innovation. “He’s creative and explores different cuisines,” Corinne says.

Sails recently earned a spot on OpenTable’s 100 Best Brunch Spots list, one of only six restaurants in the state to be recognized. Darren and his chefs are pushing for a James Beard Award. And he’s taken on another monumental task, designing the kitchen and menu for the team’s new venture, Butcher. The much-anticipated, members-only steakhouse is nearing completion in North Naples. “I believe it’s not about doing anything crazy [ingredient-wise],” he says of the push for excellence. “It’s about taking care of guests and giving them really great food.”