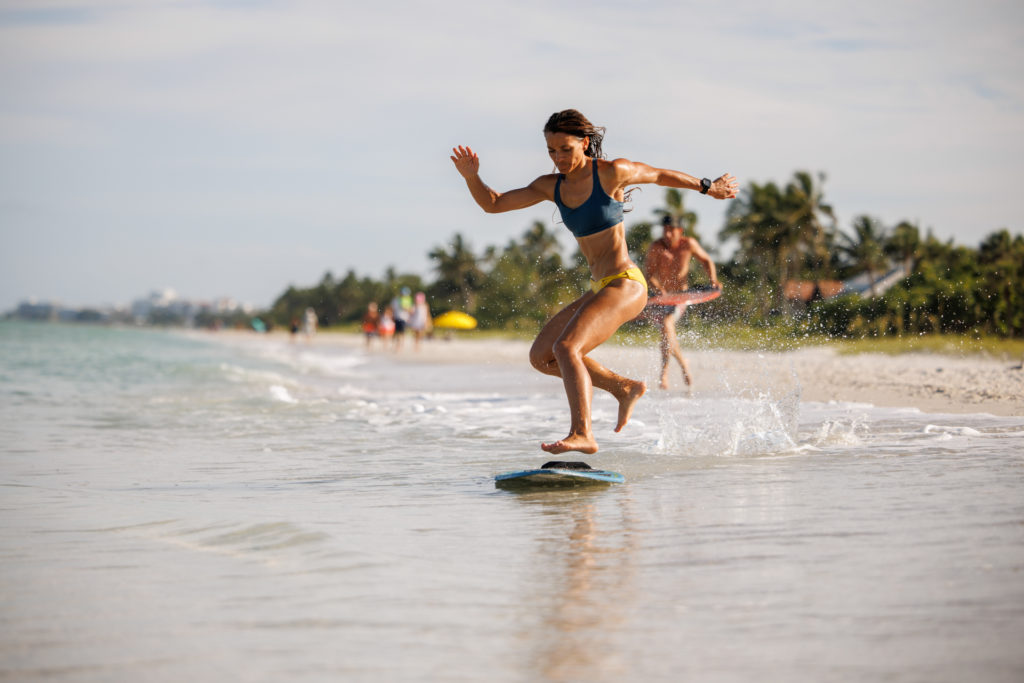 The 37-year-old founded Surf Naples in 2016 with her husband, Shaun Jacobs. The team teaches surf and skimboard classes at the Naples Pier beach. (Photo By Brian Tietz)

At 15, she watched in awe as the boys would skimboard at Naples’ Doctors Pass Beach, where the then-flat beach with a decent surf on the north side of the pass made for ideal conditions to shred. Christina mimicked her brothers’ moves: Sprint to the shore, toss her inch-thin board over a sheet of water, and hop on for a bumpy ride to the surf and back.

For the guys, the sport was a hobby, but Christina yearned to take it to the next level. That same year, the Naples native entered a contest in Fort Myers Beach as the youngest female athlete. She was one of four women in the group of 50 skimboarders and felt the added pressure. “You don’t get the camaraderie that the guys get,” she says. “You don’t get the attention the guys get.”

Still, she placed third at the event and surfed the high straight into a career in watersports. “That just made me want it even more and drove me to get better,” she says. “I was like, ‘I can be number one.’”

The 37-year-old co-founder of Surf Naples became one of the first professional female skimboarders in the world at 27 and has gone on to place as high as fifth at international competitions. In 2016, she and her husband, sponsored skimboarder Shaun Jacobs, opened their surf and skimboard school with the goal of growing the sports’ presence in the area. (You may catch them flickering across the beach at Broad Avenue South during their free, monthly Glow Skim Nights when beginner and advanced skimboarders armed with glow sticks ride out for moonlit sessions.) This year, the pair added three week-long programs and more spots to their classes to accommodate growing demand.

After two decades in the male-dominated skimboarding scene, Christina is noticing a changing tide in riders, with more girls signing up for sessions last year than boys. “There’s a ton more girls about it,” Christina says. “This is the first time we’ve ever had this. Girls are becoming more fearless. They’re not intimidated by the boys anymore.”

Christina is committed to advancing the sport, which she calls “surfing and wakesurfing’s messy brother.” She notes the informal structure in national skim competitions, where contestants are judged by their peers riding in different brackets. Friends often end up rating each other, creating bias. From competing in wakesurfing tournaments, she saw how systems with neutral, noncompeting judges worked better. She has started planting the seeds to create a seismic shift in the industry. Working with Old Naples Surf Shop—the watersports store where she spent 10 years working and volunteering—she created a panel of professional skimboarders for the shop’s annual Skim Jam, one of the biggest skim tournaments in Florida.

The couple is an integral part of the growing interest in surfing locally, too. They maintain a waitlist for surf lessons, despite the Gulf’s seemingly waveless waters. At least half the year, Christina says, there’s a small swell that’s ideal for beginner learners. Winter and its storms bring gnarlier conditions for advanced riders, and you can often find Christina and Shaun braving the elements with other avid surfers.

While surfing is limited, watersports lovers know they can skim just about any day. Naples—with its low tides and minimal wind—is perfect for practicing tricks on flat land. The couple teaches at the Naples Pier beach; during low tide, the level beach is optimal for beginner skimboarders. And, on those days when a nice swell comes off the pier, they rush to schedule beginner surfers.

Although the demand for lessons mainly comes from kids and teens, Christina has taught students of all ages. She admits adults tend to be more fearful of trying the sports, but she’s happy to coach anyone willing to try. “Confidence in the water is my biggest thing, whether they’re 4 or 40,” she says. She has visions of her students going pro—a promising 7-year-old pupil already secured a brand sponsorship this year after “skimming circles” around her. This month, she and Shaun are launching The Skim Club, an after-school program for advanced athletes to receive consistent, one-on-one coaching. Their goal: create a real community and camaraderie around skimboarding in Naples. “I want them to have the life I had,” Christina says. “That’s what I want to pass on to them—the love of skimboarding and that feeling that, ‘I can go down at any time and I’m going to run into somebody and we’re going to have a blast skimming.’”