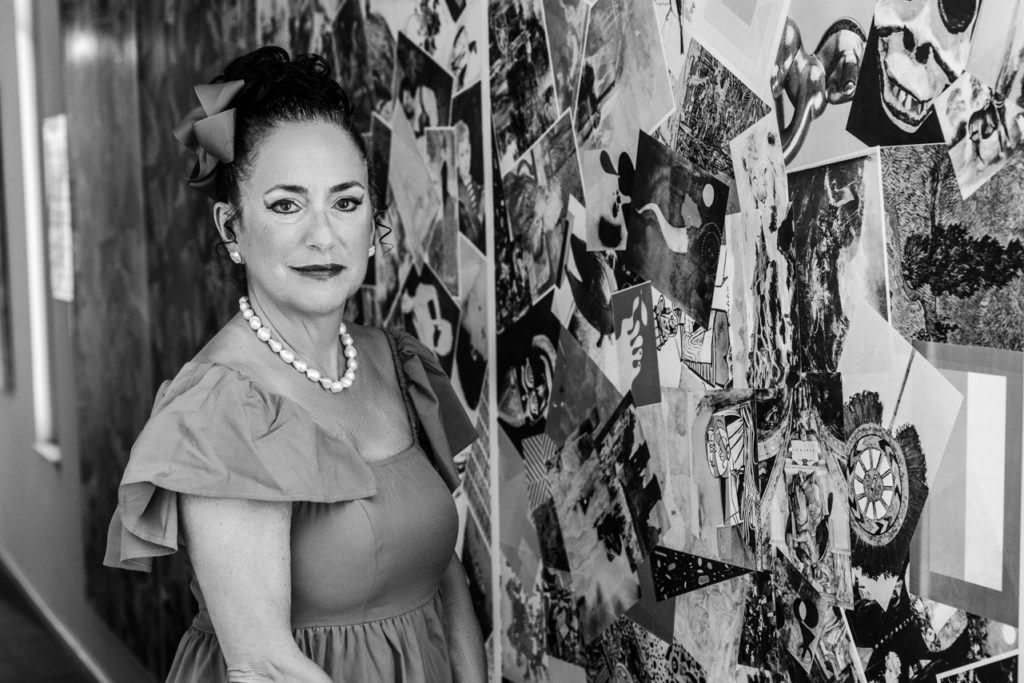 Since joining in 2014, Hyla has expanded the organization’s mission and programming, bringing in national talent, creating festivals and building a robust educational arm. (Photo by Kelly Jones)

A flyby visitor might easily mistake Marco Island—a sleepy 4-by-6-mile spit of land best known for quaint inns, nature trails and sugar-sand beaches—as an artistic desert. However, the town’s home to one of the Southeast’s most vibrant art organizations: the Marco Island Center for the Arts (MICA). On campus—a sweet collection of modern buildings in shades of periwinkle, terracotta and lemon yellow—the art center hosts nationally recognized gallery exhibitions and jazz concerts, houses some 70 resident ceramicists and painters, and offers in-person and digital art courses. This fall, the curtain rises on the Arts Center Theatre, which folded into MICA programming earlier this year, with a play written by actor Jeff Bridges. Now, MICA’s a veritable treasure trove of every art medium.

What should have taken decades to accomplish has quickly emerged in the last eight years, thanks to executive director Hyla Crane, a creative powerhouse, hellbent on transforming this tiny island into a comprehensive art nexus. Hyla’s love of the arts began at an early age in her home in Connecticut. “I studied dance and was a theater geek, but I never thought this would end up being my professional life,” she recalls. Her first path was law, but the field never spoke to her as passionately as the arts. In the early ’90s, she stepped back to raise two daughters, but soon an opportunity came knocking that would change her stars. Crane helped found The Elm Shakespeare Company, a nonprofit theater company in New Haven’s Edgerton Park. Leaning into a natural gift for networking, as well as a seemingly endless reserve of energy, she adventured on to roles in leadership and fundraising for the Long Wharf Theater, the Yale Repertory Theatre and the David Geffen School of Drama at Yale. At The Westport Country Playhouse, she, along with Academy Award winner Joanne Woodward, was integral in raising $30.6 million to fund the theater company’s next era in the mid-aughts.

Hyla finds charm in the chase. She’s driven by the challenge of something as much as the reward. Thus, when the small, struggling Marco Island Center for the Arts reached out, she took the call and the job. “When I came on in 2014, I was the fifth executive director in under four years,” she says. “The arts center was battered from the recession of 2008, and I knew it wasn’t going to be easy. But there was a tremendous board president Rosemary Wick, who I knew was really special.”

It isn’t simply the geography but also the community that marks Marco Island’s allure. And that community is the reason the arts center even exists. In 1969, a group of local artists formed the Art League of Marco Island, a hub for the island’s artists. The League evolved slowly through the decades, earning a name change to the current moniker in 2013, but its mission remained loosely focused around showcasing local art. Under Hyla Crane, the mission expanded tenfold. Today, there are still painters and ceramicists. But the center now offers stone carving programs, photography, digital mediums, and other diverse programming, like TED-style ecology lectures led by Everglades experts. Two adjacent galleries display rotating exhibits, and the center hosts receptions on the second Tuesday of each month. During the pandemic, MICA debuted a digital lab that now streams live and pre-recorded online classes, extending the art center’s reach. Hyla has also added a Musical Interludes series, which focuses on Latin jazz next year.

Marco Island itself has gone from a quiet, coastal village to a place ranked by national magazines as a primo vacation destination. MICA’s membership numbers have soared, too. Hyla has harnessed that power, tripling the operating budget through networking and fundraising. “This year is quite different,” she says. “For the first time, our grants were fully funded by the state. Our gratitude is boundless for county funding and the generosity of individuals.”

From kids’ camps to book signings to poetry readings, the varied art programming appeals to residents as much as visitors. She’s acquired shows by Cuban and Brazilian artists and continues to scout global talent and large touring collectives, like the Studio Art Quilt Associates Inc., which showcases 29 of its members’ fiber arts at MICA next May.

The addition of the Arts Center Theatre, located about 10 minutes north of MICA, in the former The Marco Players space at Marco Town Center, is the latest boon. “The previous tenants were not going to renew the lease,” she explains. “And, there was a chance the theater would have simply become retail.” With lightning speed, Hyla and her team organized to take over the space. “We had to do in a matter of weeks what should have taken months,” she says, admitting her husband argues she needs a vacation. That might be the only thing Hyla struggles to accomplish. But, the deal is locked. The stage is set. Six productions in the next 12 months include Neal Simon’s The Odd Couple and the Broadway hit musical The Fantasticks.

For Hyla, the passion to push farther comes naturally. “You don’t work in a small, nonprofit arts organization because it’s going to make you a financial windfall,” she says, earnestly. “You do it because it speaks to your soul. You do it because you believe in a community and the impact that art has on people’s lives.”