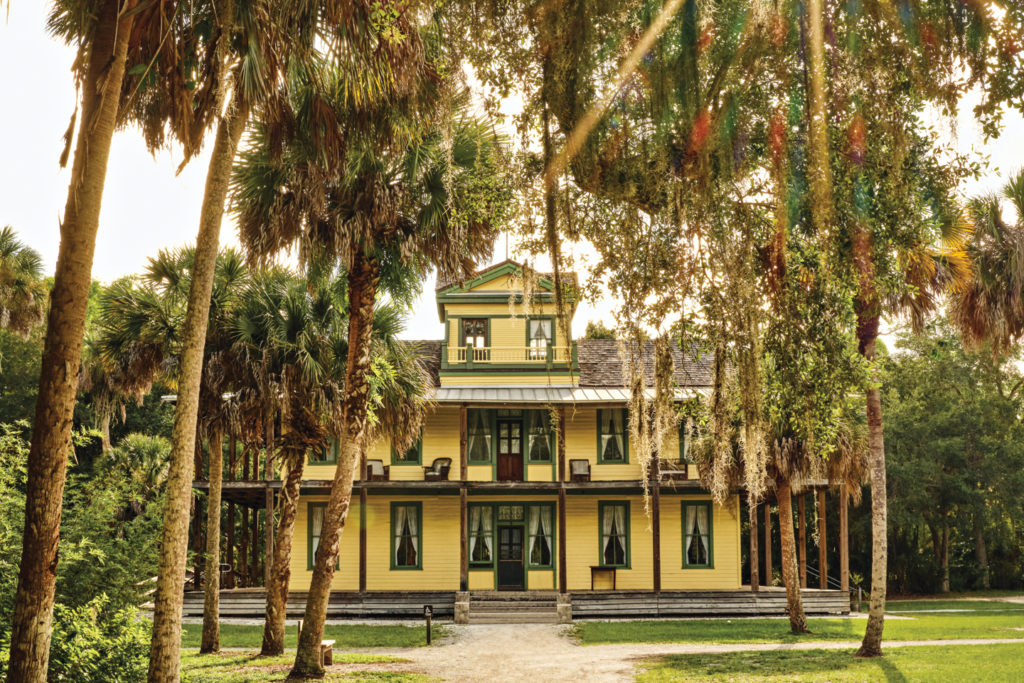 In 1894, Cyrus R. Teed and his followers found peace in the wilderness of Southwest Florida. Cyrus, a self-proclaimed messiah who went by the name Hebrew Koresh, moved from Chicago and settled on a plot of land in what today is Estero. They started a commune and practiced their faith, which included a belief in reincarnation, gender equality, strict celibacy and, among other things, the idea that the earth is a hollow sphere that contains the universe.

In 1961, the final living Koreshans, as Cyrus’ followers called themselves, donated their land to the state of Florida. Over the years, the 196-acre park has been a place where visitors find their own peace in the wild. The sense of awe, reverence and mystery Koreshan State Park inspires is in no doubt partly due to its cult history—one that is more visible now thanks to a new video that plays in the restored Founder’s House, detailing the story of the Koreshans. The documentary features interviews with descendants and insights from local journalism professor Lyn Milner and other historians devoted to studying the sect.

Though Koreshan has long been known to people as a local gem that stands a world away—or at least a century or so away—from the bustle along the adjacent U.S. 41, even most locals are only vaguely familiar with the site’s history and lore. As you enter, a sign welcomes you to “real Florida,” recalling a land thick with vegetation and buzzing with wildlife, back when great oaks and sabal palms shaded the handful of buildings in the Koreshan commune. For the most part, that slice of history has been maintained.

Eleven buildings anchor the settlement, now restored to resemble the community in its heyday. The Founder’s House features a mini-museum of Cyrus’ living area as it was in 1908, complete with a chessboard and tea set. The park offers guided tours, and during the annual winter Ghost Walks (usually late January and early February), actors portray Cyrus and his followers, including those who worked in the more than a dozen onsite businesses that sustained the Koreshans. Still standing: the general store, which served as a major retail outlet for southern Lee County; the bakery that produced 300 loaves per day at its peak; and the printing press, which took on commercial jobs and produced Koreshan literature such as The Flaming Sword newsletter that promoted their beliefs. Despite facing prejudice from the surrounding area (Cyrus himself was once badly beaten in Fort Myers), the Koreshans served as early pioneers in an area that hundreds of thousands of other transplants would eventually call home. Much like Southwest Florida values its arts scene now, the Koreshans held a deep appreciation for culture and music. At the Arts Hall, you can see where the commune’s 13-piece orchestra performed, drawing high-profile visitors like Thomas Edison and Henry Ford. An 1886 Steinway piano once used by the Koreshans still resides there.

Beyond the settlement, the park connects visitors with the Estero River and the surrounding landscape the sect held dear. Kayaking or camping onsite offers a sense of what life was like for those who inhabited the land for nearly a century until the last resident passed away in the 1980s. The Koreshans enhanced the natural beauty of the site, importing fruit trees, flowers and exotic vegetation to populate the grounds. Many species still flourish today, like the towering grass that frames much of the park’s hiking trails and the Bamboo Landing, which served as the primary entrance to the settlement. “You don’t have to walk far for a great photo,” park manager Zach Lozano says.

In a portrait that hangs in the Founder’s House, Cyrus stands stoic in a linen suit posed next to a tarpon that stretches taller than his 5-foot-6-frame. The year is 1906, and his commune is thriving with around 250 members. Just two years later, he would be dead at 69. His followers waited for days, but the promise of his resurrection never materialized. The number of Koreshans slowly declined in the decades that followed. Hedwig Michel led the group during its final years and was instrumental in securing the agreement with the state to donate the land and preserve the historic site; she lived there until she died, as “the last Koreshan” in 1982. Though the Koreshan faith may have faded, a glimpse of how they once lived remains.