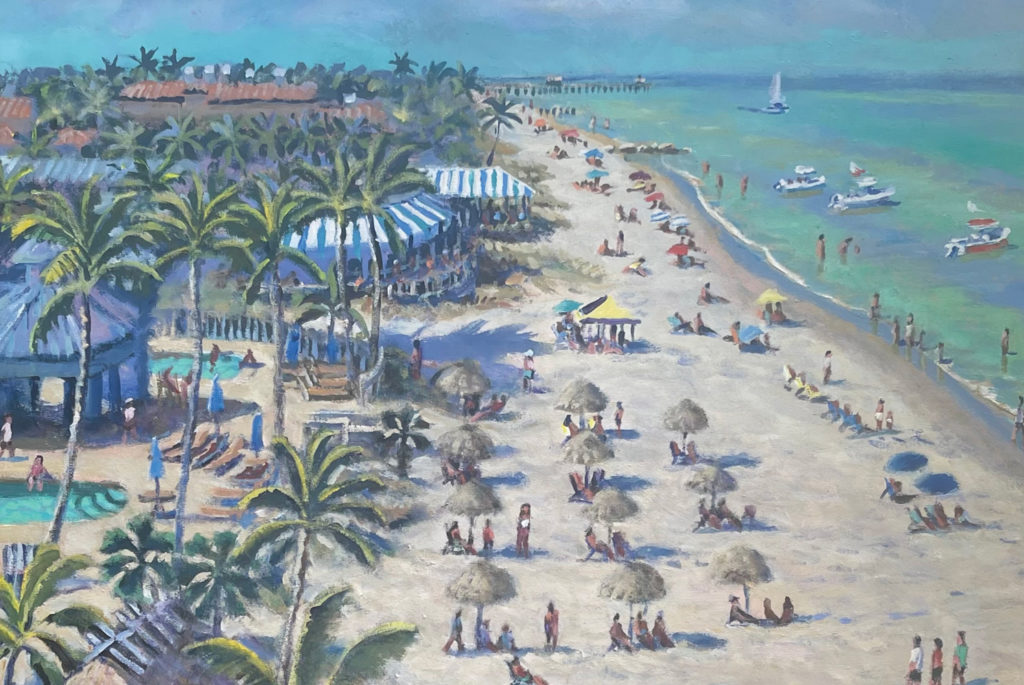 Paul Arsenault came to Florida with conservation top of mind. It was 1973, and the recent art school graduate was looking for adventure. He took a gig as a deckhand on a Smithsonian Marine Station research vessel heading from Cape Cod to Fort Pierce to assess water quality as the state’s population increased. “When you look at my work, it’s largely based around the waterfront,” Paul says. He settled in Naples in 1974 and has been painting the coast ever since.

From his 104-year-old Old Naples home, Paul’s currently sorting through his life’s work to highlight the region’s heritage and culture through paintings of local landmarks and traditions. “We must embrace responsible growth and guidance and nurture this gem we’ve got here,” Paul says. Last summer, his Shorelines exhibit at the Captiva Civic Association celebrated local islands. Now, as we approach Collier County’s centennial in 2023, Paul is working with his wife, Eileen, historians and longtime locals to create a coffee table book of his paintings and archived photos to document Collier’s unique sense of place.

SWIMMING HOLE ON THE MYAKKA RIVER, 2005
Paul was exploring Charlotte County’s section of the Myakka River, which flows through three counties, when he came upon this quintessential Florida scene: “I waved at the guys and said, ‘Hey, don’t mind me. I just want to paint a picture.’” One asked: “Are you a cop?” A puzzled Paul responded, “No, I’m not a cop. I’m an artist.” Then, everyone went about their business. To this day, Paul doesn’t call out their crime, but let’s just say it’s medically accepted now.

SCHOOL HOUSE, Estero 2002
When Paul heard that the Historical Society was moving the 1904-built Estero Creek School from its Highland Avenue home to Estero Community Park, he wanted to capture it in its original location. Seeing structures in their historical, geographical context is crucial, he argues. He shares the story of the next-door Grove House and its recent owner. She grew up on Mound Key and would row to shore and walk 3 miles along the Estero River to get to school every day. “She made one of those Scarlet O’Hara proclamations, ‘As God as my witness when I get married, I’m gonna move close to the school house,’” he recalls being told. And, sure enough, for years, she lived right next door.

NAPLES BEACH HOTEL & GOLF CLUB, 2021
For 75 years, the Naples Beach Hotel & Golf Club served as a mainstay for famous visitors and a social hub for locals. When it was announced that the building would be sold and demolished, Paul was eager to capture some of the property’s beloved scenes, including this penthouse view of the beach below.

IMMOKALEE HARVEST, 1998
For this piece, Paul ventured to the agricultural community east of Naples. “This was part of a collage that was meant to show the essence of Immokalee, to tell these stories in the connectivity of their everyday lives,” he says. The painting is a departure from his typical water scenes, but still a true depiction of the vital local culture that Paul aims to celebrate.

INDIAN DAY AT SMALLWOOD STORE, 1990s
This painting recalls one of Paul’s favorite, if not short-lived, traditions: Indian Days in Chokoloskee, when Seminole tribes from around Florida would gather outside the Smallwood Store. The storied shop was built by Chokoloskee pioneer Ted Smallwood in 1906 as a trading post for early settlers, and it’s run by his descendants to this day. “There’s no better window into Collier County’s pioneer days,” Paul says.

SEA MARVEL AQUALANE SHORES, 2000
Paul remembers when humble fishing boats docked throughout the now-ritzy Aqualane Shores in Naples. “The owner of the Sea Marvel (boat depicted below) wanted to purchase the painting with grouper as a barter, rather than pay for it,” Paul says with a laugh. “It ended up selling to someone else, and it’s in California now.” All jokes aside, Paul points to the fishing community as a driving force in maintaining Naples’ character.

LANTERN LAKE PORT ROYAL, 1974
This is the first scene that Paul painted when he moved to Naples. “I was discovering Naples and poking around the different neighborhoods and places of note, and I found Lantern Lake in the heart of Port Royal,” he says. “It had a certain tranquility to it, and it felt like a Garden of Eden.”